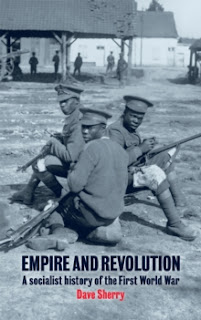 Dave Sherry’s book is a reliable and well-written introduction to the complex history of the First World War. Written from the standpoint of the historical genre “history from below” its fourteen chapters cover all the most critical aspects of the war and subsequent revolutions.

Like many similar historical subjects, there is little agreement among historians as to the origins of the war to end all wars. Some right-wing historians have attempted to rehabilitate the First World War, as a “necessary” war for democracy.  As Sherry states “That is one of the reasons I wrote the book. There’s a truly myopic view of some British historians who see it as just a war on the Western Front”.

As the Marxist writer, Nick Beams contends “the question of its origin remains controversial. The reason is that this issue is of direct relevance for the analysis of contemporary events. Roughly speaking there are two contending positions—that of Marxism and various forms of bourgeois liberal scholarship. The Marxist analysis, to summarise it in the broadest terms, is that the war was the outcome of conflicts, rooted in an objective and irresolvable contradiction of the capitalist mode of production: that between the global character of the economy and the nation-state system in which the profit system is grounded. The opposing theories boil down to the conception that the war arose out of the political mistakes, miscalculations and misjudgements of various bourgeois politicians and it could somehow have been averted if only wiser heads had prevailed”[1].

The book does demolish some myths that have surrounded the events of 1914. One myth propagated by numerous historians is that the war fell from the sky that nobody could have foreseen the war and the carnage that followed. Another myth is that the war was solely German imperialisms greed for new markets and intent of world domination.

Sherry also draws the readers attention not only to the betrayals of the various parties such as the German Social Democratic Party (SPD), but to the strikes, occupations and mutinies across each country are well detailed. He also documents how these struggles were betrayed by their leadership.

Sherry correctly concentrates on the socialist movement's opposition to the war. In his book, War and the International Leon Trotsky makes two interrelated points. The first point is he relates the origins of the war to the historical development of capitalism. The second point is to outline the development of a strategy for the international working class in the face of the betrayals by the leaders of the Second International especially that of German Social Democracy (SPD). The SPDs repudiated the decisions of its own Congress to provide support for their own ruling elite’s support of the war.

For people such as the revisionist Edward Bernstein who propagated the fallacy that capitalism had somehow overcome its contradictions and would not plunge humanity into the abyss the war cruelly exposed this myopic judgement.

This breakdown was predicted I must add by Marx who said “In the social production of their existence, men inevitably enter into definite relations, which are independent of their will, namely relations of production appropriate to a given stage in the development of their material forces of production. The totality of these relations of production constitutes the economic structure of society, the real foundation, on which arises a legal and political superstructure and to which correspond definite forms of social consciousness. The mode of production of material life conditions the general process of social, political and intellectual life. It is not the consciousness of men that determines their existence, but their social existence that determines their consciousness. At a certain stage of development, the material productive forces of society come into conflict with the existing relations of production or – this merely expresses the same thing in legal terms – with the property relations within the framework of which they have operated hitherto. From forms of development of the productive forces, these relations turn into their fetters. Then begins an era of social revolution. The changes in the economic foundation lead sooner or later to the transformation of the whole immense superstructure”.[2]

Leon Trotsky makes a similar point in his book, the War and the International “The forces of production which capitalism has evolved have outgrown the limits of nation and state. The national state, the present political form, is too narrow for the exploitation of these productive forces. The natural tendency of our economic system, therefore, is to seek to break through the state boundaries. The whole globe, the land and the sea, the surface as well as the interior have become one economic workshop, the different parts of which are inseparably connected.”
One of the strengths of Sherry’s book is that despite its short length he does explain that the war was a product of the growing inter-imperialist rivalries that had been simmering for the previous thirty years or so.

The proceeding thirty years before the First World War saw the emergence of Imperialism. A handful of industrialised capitalist nations dominated the world. At the head of these countries stood substantial corporate and banking conglomerates who were exporting capital on a global scale. These rival powers battled for the control of markets and sought even cheaper labour in Africa and Asia.

As Leon Trotsky pointed out “The future development of world economy on the capitalistic basis means a ceaseless struggle for new and ever new fields of capitalist exploitation, which must be obtained from the same source, the earth. The economic rivalry under the banner of militarism is accompanied by robbery and destruction which violate the elementary principles of human economy. World production revolts not only against the confusion produced by national and state divisions but also against the capitalist economic organisation, which has now turned into barbarous disorganisation and chaos. The war of 1914 is the colossal breakdown in history of an economic system destroyed by its inherent contradictions.”[3]

Trotsky believed that war not only signalled the downfall of the nation-state, but it ended the historical role of capitalism. This analysis came under sustain attack from figures such as Woodrow Wilson who said this was not a breakdown of capitalism and hence no need for socialism.

Trotsky’s viewpoint was supported by Elie Halevy (1870-1937)[4] in a series of lectures published in 1938 as The Era of Tyrannies), Halévy said that world war “” had increased national control over individual activities and opened the way for de facto socialism. In opposition to those who saw socialism as the last step in the French Revolution, he saw it as a new organisation of constraint replacing those that the Revolution had destroyed”.

As was pointed out earlier by Nick Beams one of the historians that fall indirectly into the camp of bourgeois historians albeit on the right wing of this group is Niall Fergusson. Fergusson it would appear has spent most of working life seeking to overturn Marxist historiography. As Beams says “Ferguson adopts the crude method deployed by so many in the past. According to his view, for the analysis of Marxism to be valid, we must be able to show that political leaders made their decisions by a kind of profit-and-loss calculus of economic interests, or that there was a secret cabal of businessmen and financiers operating behind the scenes and pulling the strings of government. Failure to find either, he maintains, cuts the ground from under the feet of the Marxist argument”.

Ferguson believes he was smart when he wrote his attack on the fundamental Marxist conception that the war arose as an inevitable product of the capitalist mode of production—the struggle for markets, profits and resources. However, no matter how many books he writes he has proved nothing.

As Beams points out the “The point upon which Marxism insists is not that war is simply subjectively decided upon by the capitalist class but that, in the final analysis, it is the outcome of the objective logic and contradictions of the capitalist profit system, which work themselves out behind the backs of both politicians and businessmen. At a certain point, these contradictions create the conditions where political leaders feel they have no choice but to resort to war if they are to defend the interests of their respective states.

Beams also mentions another historian who takes issue with Marxism on the origins of the war, although from a slightly different perspective. The British historian Hew Strachan who according to Beam “ points to the crucial role of the alliance system is not only failing to prevent war but helping to promote it. When the crisis of July 1914 erupted, he writes, “each power, conscious in a self-absorbed way of its potential weakness, felt it was on its mettle, that its status as a great power would be forfeit if it failed to act.”

The book two has two significant weaknesses one is the significant omission of far more complete opposition to bourgeois historians attacks on fundamental Marxist conceptions.
Another thing I am not sure about is whether the genre of history from below is the best way to describe such complex questions or war, revolution and inter-imperialist rivalries.

Whether we will see a flood of-of patriotic nonsense written about the 20018 anniversary of the ending of the first world war remains to be seen. As Sherry points out the war was a clash of ruling classes which were the hell-bent in protecting their interests at the cost of millions of dead. Sherry’s book is an excellent basic introduction to these events.

Further reading
[1] War and the International (Colombo: Young Socialist Publications, 1971),
[2] “Imperialism and the National Idea,” in Lenin’s Struggle for a Revolutionary International (New York: Pathfinder Press), pp. 369-370.
[3] Leon Trotsky, “On the Question of Tendencies in the Development of the World Economy,” in The Ideas of Leon Trotsky, H. Tickten and M. Cox ed. (London: Porcupine Press, 1995), pp. 355-70.
[4] Trotsky, The First Five Years of the Communist International, vol. II, p. 306.