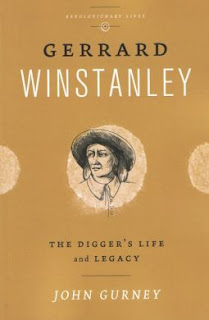 Dr. John Gurney is fast becoming a leading authority on the Diggers and their de facto leader Gerrard Winstanley. He is the author of a previous book on the Diggers called Brave Community: the Digger Movement in the English Revolution and also the author of some papers. Gurney’s latest book is a result of a paper published from 1994 (see ref 2). He regularly lectures on Winstanley.

The book is a meticulously researched, scholarly and well-presented. Gurney provides us with a good understanding of the origins of the Digger movement. It has been praised for setting an “extremely high standard for local histories of this sort and must rank alongside similar studies such as Eamon Duffy’s acclaimed The Voices of Morebath.”

Gurney’s biography runs to just over 162 pages. It would be a mistake, however, to believe that the book is academically or intellectually ‘light‘. It is nothing of the sort. Nor should it be treated as an introductory to Winstanley, the reader to get the best out of this book should at least have a rudimentary knowledge of the Digger leader and the Diggers struggle.

Gurney’s introduction sets the tone for the rest of the book in the respect that it attempts to place his work in the context of previous ‘left wing’ or ‘Marxist’ historiography.

The sign of a good book is always that (despite an increasingly crowded Winstanley book market) it tells us something new.  Gurney’s work can be seen as development on from the work of Christopher Hill and others.

It is well known that previous Marxist’s had written on the English revolution Gurney elaborates that the Russian revolutionaries paid particular attention to the writings of Winstanley so much so that Vladimir Lenin the then leader of the fledgling Soviet state issued a decree that a previous Tsarist monument was to be changed with names of former revolutionaries replacing old figures of earlier Russian history. Winstanley’s name appeared eighth on the list.

On the plus side, the English revolutionaries were “well-grounded enough in history to identify new and revolutionary ideas in the curious and archaic guise in which they appeared—as the ideologists of the revolution ransacked the Bible and half understood historical precedent for some kind of theory to explain what they were doing”.

The book is well researched and for such a small work shows many years of hard, painstaking research. The result is a very readable narrative. The book is extremely informative and thought-provoking.

It is perhaps only recently that the words of Winstanley have been fully appreciated. Gerrard Winstanley’s ‘extraordinarily rich body of writings’ were little read and even less written upon between the years 1651 and the 1890s. It was only after a really explosive revolutionary era encompassing the late 19Th and early 20Th centuries that his writings were systematically studied and written about. The first to do so were the early Marxists and later the group of historians around the Communist Party of Great Britain.

Gurney is clear that the study of Winstanley should be not solely of historical value but must have a contemporary resonance. He says: “Today knowledge of Winstanley is widespread, and he has become one of the best-known figures from the period of the English Revolution. There have been numerous plays, novels, TV dramas, songs and films, and Winstanley has often been cited as an inspirational figure by politicians of the left. More specifically, his ideas and achievements have remained prescient, inspiring generations of activists and social movements” his name he continues “has in recent years also been invoked by freeganism, squatters, guerrilla gardeners, allotment campaigners, social entrepreneurs, greens and peace campaigners; and both Marxists and libertarians have laid claim to him as a significant precursor”.

Like many leading figures of the English revolution knowledge of Gerrard Winstanley’s early life is a bit sketchy. He was born 1609, and as one writer put it was “one of the most extraordinary and engaging figures to emerge during the English Revolution of 1640 – 60” .

He was the son of an Edward Winstanley. In 1630 he moved to London and took up an apprenticeship, and in 1638, he was a freeman of the Merchant Tailors' Company. His adult life is unremarkable he married Susan King, who was the daughter of London surgeon William King, in 1639. It is clear that without the English Civil War, his life would have moved at the same pedestrian pace as before. But like many his world was turned upside down. His business took a beating during the early part of the war, and in 1643 he was made bankrupt. He moved to Cobham, Surrey, where he found menial work as a cowherd.

It was at Cobham in Surrey that the Diggers movement was founded. Winstanley believed that the land was a “common treasury for all”. He began to recruit like-minded people and began to work the ground on St George's Hill in the summer of 1649.

The Diggers were part of a group of men that sought to understand the profound political and social changes that were taking place at the beginning of the 17th century. They were the true ‘Ideologues of the revolution’ and had a capacity for abstract thought. While the Diggers were sympathetic to the poor, this stemmed from their religion they had no program to bring about social change; they never advocated a violent overturning of society. Their class outlook, that being of small producers, conditioned their ideology. At no stage did the Diggers or that matter did the larger group the Levellers constitute a mass movement. The contradiction between their concern for the poor and their position of representatives of the small property owners caused some tension. They had no opposition to private property, and therefore they accepted that inequalities would always exist, they merely argued for a lot of the poor to be made more equitable.

According to Michael Braddick, revisionists have “have tried to cut the English revolution down to size or to cast it in its own terms. In so doing, they naturally also cast a critical eye over the reputation and contemporary significance of its radical heroes”. Maybe it is in this context that Mark Kishlansky has written a recommendation of Gurney’s book on the back cover. This seems a bit strange as Kishlansky is a bit hostile to the coverage Winstanley is getting. He says of the book “This is a clear-eyed yet sympathetic account of one of the most baffling figures of the English Revolution. Gurney's painstaking research provides a wealth of new information that is assembled into a highly readable narrative. An informative and thought-provoking book. ”

Kishlansky despite recommending Gurney’s book is keen to downplay the role of Winstanley who according to him was “a small businessman who began his career wholesaling cloth, ended it wholesaling grain, and in between sandwiched a mid-life crisis of epic proportions”. For revisionists, "the years when the world was turned upside down stand in the same relation to the course of English history as Winstanley’s wild years either side of his fortieth birthday does to his subsequent life as a churchwarden”.

Gurney’s work on the Digger’s represents an opposition to this revisionism. I am not saying that it accounts for a new form of historiography, but it does mean that opposition to present-day revisionism is beginning to gain a hearing. It is also no accident that interest in Winstanley coincides with one of the biggest crisis to capitalist system we have witnessed since the 1920s and 30s have occurred over the last decade.

Gurney’s book is invaluable when it starts to trace the origins of Winstanley’s radicalism. Gurney does not subscribe to the theory that it was solely down to the war radicalizing people such as Winstanley. Gurney believes that radical views were being expressed all over the country before the outbreak of civil war. In a previous essay, Gurney elaborates on why the Digger’s achieved a level of local support in Cobham “Local support for the Diggers may also have been connected with Cobham's marked traditions of social conflict. The manor of Cobham, a former possession of Chertsey Abbey, had passed into the hands of Robert Gavell in 1566 and was to remain with his family until 1708. During the later sixteenth century the Gavell family became involved in a long and protracted series of disputes with their tenants. In a case brought in the court of Requests by William Wrenn, a Cobham husbandman, Robert Gavell was accused of overturning manorial customs and of infringing his tenants' rights, by seeking to extract more rent than was customarily paid, and by spoiling the timber on Wrenn's copyhold. He was also charged with attempting to escape the payment of tax by shifting the burden on to his tenants, laying 'a hevy burden uppon the poorer tennants contrarye to the Ancient usage, equitie and Consciens'Actions against Robert Gavell and his son Francis were resumed in the court of Chancery during the 1590s by tenants seeking to halt the continued assault on manorial custom”.

It has been posted that Winstanley was proto-communist and early Marxist but as Geoff Kennedy commented in his Digger Radicalism and Agrarian Capitalism Winstanley should also be placed in the context of his times. Winstanley’s thought and writings were profoundly religious, and as the former Marxist writer, Cliff Slaughter said “for the understanding of some of the great problems of human history, the study of religion is a necessity. What is the relationship between the social divisions among men and their beliefs about the nature of things? How do ruling classes ensure extended periods of acceptance of their rule by those they oppress? Why was the ‘Utopians’ wrong in thinking that it was sufficient only to work out a reasonable arrangement of social relations to proceed to its construction? It was out of the examination of questions like this in the German school of criticism of religion that Marx emerged to present for the first time a scientific view of society. ‘The criticism of religion is the beginning of all criticism.”

I would agree that this is “no hagiography”. Gurney is not blind to Winstanley’s weaknesses. He outlines that some of Winstanley’s ideas were not progressive, or that his attitude towards women’s emancipation was not the same towards men. Having said that Gurney’s book has the look of a labor of love. The author even goes as far as to include his own photos with the text.
Gerrard Winstanley is an important book and should be read by academics and the general public alike and for all those in favor of a “common treasury for all”.

5.      The Diggers, the land and direct activism John Gurney  http://stirtoaction.com

6.      Restoring the Garden of Eden in England’s Green and Pleasant Land: The Diggers and the Fruits of the Earthmore by Ariel Hessayon

11.  Economic and social thought of Gerrard Winstanley: Was he a seventeenth-century Marxist?
Winthrop Still Hudson (Author)

Posted by A Trumpet of Sedition at 07:52