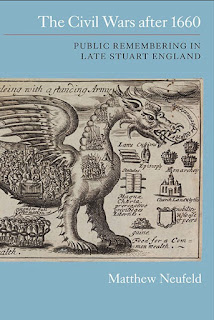 It is evident from Mathew Neufeld’s book The Civil Wars after 1660 that the English bourgeoisie and aristocracy during the latter part of the 17th century did not look back at the English revolution of the 1640s with any fondness.

Neufeld does not believe that a bourgeois revolution took place in the 1640s, but his book does provide us with an insight into the thinking of the Restoration bourgeoisie about this momentous event in the British and international history.

From a historical and political standpoint, the restoration of the British Monarchy in 1660 was seen as a Glorious and peaceful Revolution, unlike the English revolution which was considered “nasty, brutish and short”. The book is beautifully illustrated as you would expect from a Boydell publication.  Neufeld clearly spent a lot of time in the archives and used published histories, memoirs, petitions, and sermons to significant effect.

Neufeld’s book published in 2013 was part of a growing academic and general interest in the Restoration period. For scholars, this is a fascinating time especially when archives covering the period are beginning to be digitised. One example of this is the Inventory of Puritan and Dissenting Records, 1640–1714, by Mark Burden, Michael Davies, Anne Dunan-Page and Joel Halcomb (2016)[1]

However, despite the plethora of books on or around the restoration period and an increase in interest from historians Neufeld’s book is the only full-length study on the topic since Blair Worden’s Roundhead Reputations: The English Civil Wars and the Passions of Posterity (2001).
The book is divided into six chapters each of which outlines the lengths the bourgeoisie and aristocracy went to forget the English revolution. As Neufeld points out, the purpose was to prevent a real revolution breaking out during the restoration.

Much of the propaganda produced during the Restoration was aimed at blaming Puritanism for the Revolution.  The Monarchy was absolved from any wrong doing. The thing that strikes one when reading this book is the extent of rewriting history to suit political ends.

According to Robert D. Cornwall “There were efforts both to forget the English Civil War and the Interregnum as an aberration and the need to remember to prevent something like this happening again. With monarchy and episcopacy linked, much of the work of remembering was designed to make sure that the Puritan impulse that was often blamed for the Wars and Interregnum be kept at bay”.

What lay behind this blaming of Puritanism for the revolution was the need during the late Stuart period to justify the Restoration settlements. Anyone who disagreed with the prevailing orthodoxy was labelled a dissenter and punished accordingly. The restoration time was an extremely volatile political and social situation.

As Lloyd Bowen points out “the king’s preferred medicine was a kind of official amnesia, articulated first in the Declaration of Breda and then enshrined in the Act of Indemnity and Oblivion. Passed by the Convention Parliament in 1660, the Act’s stated desire was to ‘bury all seeds of future discords’ by wiping the slate clean, outlawing even ‘terms of distinction [and] … words of reproach any way tending to revive the memory of the late differences’. But this public face of oblivion and toleration failed to endure in the face of the profound religious and political tensions which remained after the devastating civil war. The government subsequently put in place an apparatus of religious discrimination and persecution which helped rapidly undermine the broad coalition of support which had brought about the ‘miracle’ of Oak Apple Day 1660”[2].
As Neufeld states, the bourgeoisie went to great lengths to wipe out the memory of the English revolution. The high point of this amnesia was The Indemnity and Oblivion Act 1660[3].

As Neufeld points this act has a contemporary feel with “post-conflict reconciliation” seen in South Africa and Northern Ireland, but perhaps, most importantly, was the Spanish bourgeoisie’s attempt post-Franco to forget the Spanish Civil War.The Pact of Forgetting according to Alberto Reig Tapia was "In practice, this presupposed suppressing painful memories derived from the dictatorship's division of the population into 'victors' and 'vanquished[4]'.

While Neufeld’s book, on the whole, has been well received one writer accused it of being Anglo-centric. Lloyd Bowen says that “while it is true that calls for a more ‘British’ perspective in early modern histories can be rather trite genuflections towards de rigueur historiographical fashions, and while it is equally true that scholars can only do so much and that England’s story deserves its star billing, there is nevertheless a serious point to be raised in a study of the public remembering of the civil wars that does not have an index entry for ‘Ireland’. He continues “The harrowing memories of 1641, or of Drogheda, surely had their place in the public consciousness of the period, while Scotland’s rather cursory treatment in a period that witnessed the Act of Union also requires rather more justification and discussion than it receives”[5].

Perhaps another criticism and a more serious one at that has been Neufeld’s failure to examine class relations during the later part of the 17th century. The conflict between the Whigs and the Tories is not seriously considered. I am not saying that every historian has to take on board vast swathes of Marxist writing, but a use of Karl Marx’s book on the subject would not have gone amiss.

Perhaps this one from Capital “The “Glorious Revolution” brought into power, along with William of Orange, the landlord and capitalist appropriators of surplus-value. They inaugurated the new era by practising on a colossal scale thefts of state lands, thefts that had been hitherto managed more modestly. These estates were given away, sold at a ridiculous figure, or even annexed to private estates by direct seizure.  All this happened without the slightest observation of legal etiquette. The Crown lands thus fraudulently appropriated, together with the robbery of the Church estates, as far as these had not been lost again during the Republican revolution, form the basis of the today princely domains of the English oligarchy. The bourgeois capitalists favoured the operation with the view, among others, to promoting free trade in land, to extending the domain of modern agriculture on the large farm system, and to increasing their supply of the free agricultural proletarians ready to hand. Besides, the new landed aristocracy was the natural ally of the new bankocracy, of the newly-hatched haute finance, and of the large manufacturers, then depending on protective duties. The English bourgeoisie acted for its own interest quite as wisely as did the Swedish bourgeoisie who, reversing the process, hand in hand with their economic allies, the peasantry, helped the Kings in the forcible resumption of the Crown lands from the oligarchy. This happened since 1604 under Charles X. and Charles XI[6].

As was mentioned earlier Neufeld must have spent a significant amount of time in the archives. His book uses three main pieces of literature. 1. Ludlow’s Memoirs (1698 – 9) 2. Thomas Carlyle’s edition of Oliver Cromwell’s letters and speeches (1845); 3. S. R. Gardiners histories (1893).

The first chapter covers the years 1660 -1673. Neufeld outlines the use of officially written records which on the whole tend to blame the Puritans for the outbreak of the civil war. Chapter two examines the relief petitions of injured soldiers alongside the memoirs of Sir Hugh Cholmley and Richard Atkins. Neufeld uses these two sources to “‘vindicate their sense of personal identity” (p. 56).

Chapters 3 and 4 takes a different tack in that they examine how historical writings of the civil war began to change. Neufeld detects a slight shift away from the Whig-dominated historiography to what has been called ‘historical parallelism’ (p. 105).

Chapter five examines John Walker’s the Sufferings of the Clergy during the Grand Rebellion (1714). Chapter six concentrates on printed sermons. Neufeld's again links these histories with the changing political landscape of the late 17th and early 18th century.

Like much of modern historiography this book was difficult to place. Firstly, the use of memory is always fraught with danger especially when examining the English revolution. Neufeld’s historiographical approach has been labelled by one writer as a ‘presentism’ perspective, whereby memory of the past is constructed and reconstructed to suit the current interests of ruling elites. Neufeld is not Marxist, but this approach does owe a small debt to Marxism.

Secondly, much of the history of this period has been dominated by Whig historians, as Ann Talbot explains “the Whig interpretation of history had deep roots in the consciousness of the British political class. The visitor to Chatsworth House in Derbyshire can still see in the great entrance hall a fireplace inscribed with the legend “1688 The year of our liberty.” It refers to the “Glorious Revolution” when James II quit his throne and his kingdom overnight, and William of Orange was installed as king. This was the kind of palace revolution that the British ruling class increasingly preferred to look back on rather than the revolution in the 1640s when they had executed the king, conveniently overlooking the fact that James would not have run if he had not remembered the fate of his father—Charles I”.

Neufeld’s book is part of a growing debate amongst historians about this period. A new generation of revisionist academics is asking new questions. One such question is did the restoration period represent a watershed in the political, cultural, and social of English history.

John Morrill in his book After the Civil Wars (2000) answered in the negative saying that “one unfortunate side-effect of decades of searching for the holy grail of ‘the causes of the civil war’ in the century before 1640, and the assumption that nothing could be the same afterwards, has been to create an almost impermeable barrier between the periods before and after 1660”.

Another side of the debate has been to downplay the historical significance of this period. Unfortunately, much of this has been dominated by left-leaning historians such as Christopher Hill. In fact, one of his earliest works was “The myth of the “Glorious Revolution” elaborated in Hill’s first published article, which appeared in the Communist International under the pseudonym E.C. Gore in 1937.

Hill downplayed the significance of the restoration period  “ some would say that Hill’s work has had the effect of downplaying the importance of the Restoration period, since he sees the Glorious Revolution as a mere footnote to the more important structural revolution of the mid-century, with the years after 1660 being for the radicals a period of disillusionment and introspection brought on by the experience of defeat.”

Neufeld's book is an excellent piece of history writing.The book is a backhanded and unconscious compliment to the Marxist analysis of the restoration period.

It is hoped that the book reaches a wide readership especially those interested social, cultural, and political histories. For scholars working in memory studies, this is a goldmine.

As Neufeld puts it in his conclusion: "The Restoration was a kind of revolution, attended with a dramatic change of regime with long-lasting political, social, and ecclesiastical consequences" (p. 246). Although not the last word on the subject, it is hoped that it stimulates a new debate on the subject.

Posted by A Trumpet of Sedition at 03:28