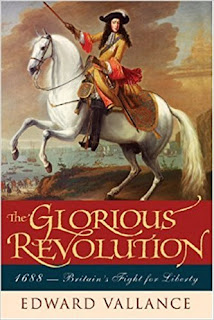 Edward Vallance has joined a crowded market of books and articles both academic and non-academic that have sought to evaluate the Glorious Revolution of 1688.

It is noticeable that the last decade has seen a more serious study of this neglected period. The book is one of the better ones. It is well-written, researched and appeals to the general reader and academic alike.

Vallance begins the book with two quotes. One from Thatcher and one from Karl Marx. It takes a brave historian to quote both. It takes an even braver one to claim that their positions on the Glorious Revolution was similar.

In her Revolutions of 1688–89 speech said  Thatcher said this “there are many important conclusions to be drawn from those momentous events 300 years ago. First, the glorious revolution established qualities in our political life which have been a tremendous source of strength: tolerance, respect for the law and the impartial administration of justice, and respect for private property. It also established the tradition that political change should be sought and achieved through Parliament. It was this which saved us from the violent revolutions which shook our continental neighbours and made the revolution of 1688 the first step on the road which, through the successive Reform Acts, led to the establishment of universal suffrage and full parliamentary democracy.

“The events of 1688 were important in establishing Britain's nationhood, and they opened the way to that renewal of energy and resourcefulness which built Britain's industrial and financial strength and gave her a world role. They demonstrated that a free society will always be more durable and successful than any tyranny”.

It is quite striking that Thatcher believed that England’s place in the world stemmed from what amounts to a coup and foreign invasion to boot. Maybe Ted Vallance had his tongue firmly in his cheek when he wrote the book, but it is stretching a little to compare the two.

In his analysis of the Glorious revolution, Marx was scathing of both the Whigs and Tories. This on the Whigs gives us a real insight into his position “Ever since the “glorious revolution” of 1688 the Whigs, with short intervals, caused principally by the first French Revolution and the consequent reaction, have found themselves in the enjoyment of the public offices. Whoever recalls to his mind this period of English history, will find no other distinctive mark of Whigdom but the maintenance of their family oligarchy. The interests and principles which they represent besides, from time to time, do not belong to the Whigs; they are forced upon them. By the development of the industrial and commercial class, the Bourgeoisie. After 1688 we find them united with the Bankocracy, just then rising into importance, as we find them in 1846, united with the Millocracy”.[1]

Vallance could have called upon another revolutionary if he had any doubts on the nature of the British bourgeoisie’s position which was to either played down this revolution or erase it from collective memory.

The Russian revolutionary Leon Trotsky commentated on this phenomenon “In the seventeenth century England carried out two revolutions. The first, which brought forth great social upheavals and wars, brought amongst other things the execution of King Charles I, while the second ended happily with the accession of a new dynasty. The British bourgeoisie and its historians maintain entirely different attitudes to these two revolutions: the first is for them a rising of the mob – the “Great Rebellion’; the second has been handed down under the title of the “Glorious Revolution”. The reason for this difference in estimates was explained by the French historian, Augustin Thierry. In the first English revolution, in the “Great Rebellion”, the active force was the people; while in the second it was almost “silent”. Hence, it follows that, in surroundings of class slavery, it is difficult to teach the oppressed masses good manners. When provoked to fury they use clubs, stones, fire. Moreover, the rope. The court historians of the exploiters are offended at this. However, the great event in modern “bourgeois” history is, none the less, not the “Glorious Revolution” but the “Great Rebellion”.[2]

The book is successful in providing a basic introduction to the historiography of the revolution.
A solid read around the subject of the Glorious Revolution will tell the reader that the “Whig interpretation of this so-called bloodless of revolutions has dominated historiography.

The term the “Whig interpretation of history” can be traced back to Sir Herbert Butterfield’s slim volume of that name. Butterfield’s book was written primarily as a polemic against the Marxist theory of history. Whig historiography has always been associated with Victorian society, which oversaw a degree of stability that that had not been the case in the previous two centuries. This type of history saw Britain as having a special destiny.

According to the Marxist writer Ann Talbot, there is a sense “that in Britain things were done differently and without continental excess was not entirely new. Burke had expressed it in his Reflections on the French Revolution, but there were plenty of voices to gainsay him and the social disturbances in the years of economic upheaval that followed the Napoleonic Wars were a testimony to the contrary. Luddism, anti-corn law agitation, the anti-poor law movement, strikes and most of all Chartism demonstrated that Britain was not an island of social peace.

She continues “the Whig interpretation of history had deep roots in the consciousness of the British political class. The visitor to Chatsworth House in Derbyshire can still see in the great entrance hall a fireplace inscribed with the legend “1688 The year of our liberty.” It refers to the “Glorious Revolution” when James II quit his throne and his kingdom overnight, and William of Orange was installed as king. This was the kind of palace revolution that the British ruling class increasingly preferred to look back on rather than the revolution in the 1640s when they had executed the king, conveniently overlooking the fact that James would not have run if he had not remembered the fate of his father—Charles I” [3].

Macaulay and for that matter, the majority of Whig historians exhibited a sort of Whig triumphalist view that the Glorious Revolution saved England from the full dictatorship of James II and the revolution led to a  constitutional monarchy which gave England civil and religious liberty and rule of law.

According to Blair Worden “Macaulay's account is thought of as the summit of Whig historical partisanship, but to him, 1688 was the triumph not of a party but a nation when the best of the Whigs joined with the best of the Tories”.[4]

Macaulay’s overtly fawning political approach put him firmly in the camp of what Trotsky called a “court historian”. Karl Marx attacked Macaulay’s writing for being one-sided and complacent and a 'systematic falsifier of history'.
GM Trevelyan

George Macaulay Trevelyan a British historian and academic was the ultimate whig historian. He was heavily tied to the political establishment, and his work reflected this fact. In his book The English Revolution, 1688–1698[6]  he portrays James II as a tyrant.  Despite this, the book has become a standard text for any university course.

On the plus side, he was a readable and talented historian. This was was spotted at an early age the Fabian writer Beatrice Webb who recounts when she met the historian in 1895 "He is bringing himself up to be a great man, is precise and methodical in all his ways, ascetic and regular in his habits, eating according to rule, exercising according to rule... he is always analysing his powers, and carefully considering how he can make the best of himself. In intellectual parts, he is brilliant, with a wonderful memory, keen analytical power, and a vivid style. In his philosophy of life, he is, at present, commonplace, but then he is young - only nineteen."

However, not all historians were smitten by Macaulay’s partisan approach. Geoffrey Elton accused him of being "not very scholarly writer" who wrote, "soothing pap... lavishly doled out... to a broad public". John P. Kenyon thought he was an "insufferable snob" with "socially retrograde views".

It must be said that some these comments border on character assassination. Macaulay is worth reading and was one of the few historians to link both the English revolution of the 1640s and Glorious revolution in what could be interpreted as being part of an extended seventeenth century.

Much of what passed for a Marxist analysis of the Glorious revolution was written by the historians that were in the Communist Party Historians Group. Having said this, they did not write an awful lot.

The necessary myth of the “Glorious Revolution” was the aim of Christopher Hill’s first published article. This article was written under the pseudonym E.C. Gore in 1937. It appeared in the magazine Communist International and is extremely difficult to track down.

Hill wrote very little on the Glorious revolution preferring to concentrate on the English Revolution 1640. His writings on this subject as Ann Talbot says “contained a concise statement of the arguments that Hill was to spend the rest of his life elucidating”.
In many ways, the Communist Party’s attitude towards the revolution has a strange similarity to the position of the British bourgeoisie, and that is to play down its importance.

The SWP put a relatively orthodox position on the revolution. According to Duncan Hallas, “1688 represented the completion of the stabilisation of the English revolution, and it represented it in the most conservative form possible, consistent with the establishment of a stable bourgeois administration”.

They like the Communist Party have not bothered with the period. With other revolutions, it has always co-opted historians to write on them but not so the Glorious revolution.

Vallance rejects the commonly held view, especially amongst Marxist historians that the English revolution and the Glorious revolution are linked in what should be termed the Long Seventeenth Century.

Revisionists and post-revisionists have according to one writer have “rebranded 1688 as a dynastic revolution serving Dutch interests - especially conflict with France - rather than the defence of England's "ancient constitution".

Vallance’s book is firmly in the Post-revisionist camp in that rejects both Marxist and Whig historiography. Vallance does not seem to want to post a new historiography appears to be happy arguing that the revolution was “less bloodless, less glorious”.

On this matter, his viewpoint is like Steve Pincus whose new book also sought to overturn the two dominant schools of historical interpretation. According to Graham Goodlad, Steve Pincus’s new study of the Glorious Revolution challenges the familiar Whig orthodoxy, originally expounded by Macaulay in the nineteenth century, and refined by successive generations of historians. According to this tradition, the replacement of James II by William and Mary was the work of a politically conservative elite, intent on restoring a balanced, historic constitution that had been threatened by the authoritarian, pro-Catholic actions of a misguided monarch. Pincus rejects both this interpretation and the more recent version of revisionists like John Miller and Mark Goldie, who have argued that James’ principal aim was to secure religious toleration for Catholics and Protestant Dissenters – a goal which led him into conflict with the narrowly Anglican prejudices of the English landed class. Pincus holds that both approaches underestimate the truly revolutionary nature of the struggle between the followers of James and William of Orange”.[5]

It is evident from the significant number of new books on the subject of the Glorious Revolution that the period is gaining something of a renaissance.

While classical Marxists such as Karl Marx have laid the foundations for a serious study of the Glorious revolution from the standpoint of historical materialism very few historians who professed to be Marxist, have built upon this platform. This theoretical indifference to an important period in the history of Britain is puzzling. Even more dangerous is that it mirrors the attitude of the bourgeoisie itself.