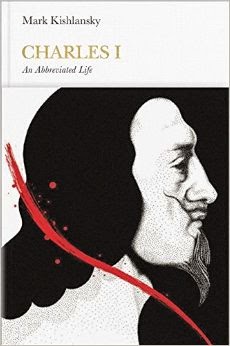 “And thus said Shimei when he cursed, Come out, come out, thou bloody man, and thou man of Belial: The LORD hath returned upon thee all the blood of the house of Saul, in whose stead thou hast reigned; and the LORD hath delivered the kingdom into the hand of Absalom thy son: and, behold, thou art taken in thy mischief, because thou art a bloody man.—King James Bible 2 Samuel 16:7, 8. [1]

So ye shall not pollute the land wherein ye are: for blood it defileth the land: and the land cannot be cleansed of the blood that is shed therein, but by the blood of him that shed it.

The above two quotes are not to be found in Mark Kishlanksy’s new biography of Charles I. Kishlansky does not believe that Charles was a “man of blood” on the contrary he believes that history and its historians have much maligned this monarch.

Kishlansky believes “Even his virtues were misinterpreted and scandalously reviled. His gentleness was miscalled defect of wisdom; his firmness, obstinacy; his regular devotion, popery; his decent worship, superstition; his opposing of schism, hatred of the power of godliness.”[1]

Kishlanksy’s book is an aggressive defense of both Charles and monarchy in general. As Charles said "Princes are not bound to give an account of their actions, but to God alone" Kishlansky seems to take the quote and turns it into a historical perspective.

According to him “Charles I is the most despised monarch in Britain’s historical memory. Considering that among his predecessors were murderers, rapists, psychotics and people who were the mentally challenged, this is no small distinction.” Kishlansky concludes in this brief book that its protagonist has been misjudged.

Even though the English revolution was the most devastating regarding people killed and politically attractive given that a reigning monarch has executed a republic declared and the House of Lords abolished you get little of an idea of this in this short book. I know Kishlansky did not have much space, but surely only one mention of Oliver Cromwell is a little mean.

Given that the English revolution was primarily a political and religious dispute Kishlanksy’s heavy emphasis on the individual mistakes, misjudgments and general bad luck of the monarch is typical of his historical methodology. In many senses, this biography is part political rehabilitation, part polemical essay rather than a history book

The book has only been released recently, so it is a little premature to make an overall assessment of its reception in the media or amongst academic journals, but some comments can be done.

Generally, the book has been well received. Given the conservative nature of its author, this is not surprising. For instance on Amazon “In Mark Kishlanksy’s brilliant account it is never in doubt that Charles created his own catastrophe, but he was nonetheless opposed by men with far fewer scruples and less consistency who for often quite different reasons conspired to destroy him. This is a remarkable portrait of one of the most talented, thoughtful, loyal, moral, artistically alert and yet, somehow, disastrous of all this country's rulers”.

Of course, it is Amazon’s right to promote the book anyway it sees fit but as the above quote suggests this has gone beyond standard promotion. Hopefully whoever wrote the media blurb was not a historian for it reduces history to the level of a Janet and John book.

Firstly it must be said that the men who opposed Charles both inside parliament and out were men of principle and fought for those principles through to the end.

Kishlansky believes of Charles that “Beneath the reviled and excoriated King of historical reputation is a flesh-and-blood man trapped by circumstances he could not control and events he could not shape.” Kishlanksy’s belief that individuals are prisoners of external forces also does not get us very far.

As Herbert Spencer wrote "You must admit that the genesis of the great man depends on the long series of complex influences which has produced the race in which he appears, and the social state into which that race has slowly grown....Before he can remake his society, his society must make him."[2]

Kishlanksy’s aim in this book is to overturn centuries of this type of historiography produced in general to better our understanding of the civil war. He believes that the long-held view of Charles and his reign has been distorted and the centuries-long the historical narratives opposing this view is merely “Parliamentarian propaganda.”

A major review of the book is to be found on the Guardian website. It is widely sympathetic to Kishlanksy’s’ view. Without examining in any detail what major historians have printed on the subject matter, it produces quotes that back up Kishlansky hypothesis  “ GM Trevelyan thought him “selfish and stupid,” while the Ladybird biography of Oliver Cromwell leaps off the fence to inform six-year-olds that “King Charles was a very stupid man.” It then quotes Kishlansky uncritically saying “What began as propaganda has been transmuted into seeming fact.”

The Guardian continues Kishlanksy’s theme that Charles was battling against bad luck all through his life “Whichever side you take, it’s hard to deny that Charles was plagued from early on by almost comical levels of bad luck. As a young man, his daring incognito voyage to Spain to woo the Infanta turned into a fiasco. Two decades later, not only would his armies suffer crippling losses at the battle of Naseby, but Charles’s own personal correspondence would be captured: the public revelation of his efforts to secure Catholic support against the forces of Parliament would be a devastating blow to the king’s reputation. A botched attempt to attack and plunder Spanish shipping in the first year of his reign set the tone for later military ventures: ‘the winds, as always for Charles, were contrary’.[3]

Kishlanksy’s defense of Charles I is absolute and virtually unconditional. He rejects the standard view that Charles was intransigent. He believes that the king bent over backwards to conciliate and to compromise with parliament. Kishlansky is perfectly in his right as an established historian to counter prevailing historiography. It is a little surprising that he chooses to do so in such a limited space is astonishing. I am not a professional historian but even I know that to overturn three centuries of historiography is going to take longer than 144 pages. As one writer puts it the “small amounts of evidence are made to bear an enormous argumentative burden”.

Even the sympathetic Guardian reviewer was forced to admit that Kishlanksy’s hoop jumping was in danger of turning his reconsideration of Charles into “whitewash.”

It is not within the scope of this review to go over Kishlanksy’s previous written work, but it is evident from this new book that his place as a pioneer of a transatlantic revisionist interpretation of early Stuart history is secured.

Kishlansky joins a growing number of major historians such Kevin Sharpe, Conrad Russell and John Morrill. Who in one form or another rejected both the Whig and Marxist historians who had seen the Civil Wars of the 1640s as stemming from the growth of ideological opposition to the Stuart monarchs over the previous half-century.

The revisionist school seek to challenge the “ideological consensus” or as Kishlansky puts it the “fallacy of social determinism’ that has existed since1920s. These historians reject any severe economic or social analysis and argue that revolutions are nothing but the work of a tiny group of conspirators.

In any review, I try to be as generous as I can, and on the whole, I would recommend this short narrative on the life of Charles I as a competent introduction to the subject. If that were all it was, then I would have no trouble but as this is more a polemic than a history book it needs to be answered in the future in a more detailed manner.


[3] Charles I: An Abbreviated Life by Mark Kishlansky – http://www.theguardian.com/books/2014/dec/18/charles-i-an-abbreviated-life-king-mark-kishlansky-review
Posted by A Trumpet of Sedition at 12:45