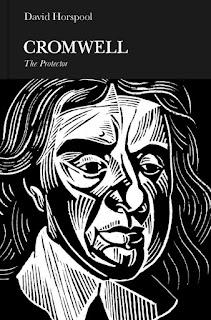 I am all for swimming against the historical tide and do so on many occasions. But then I am not a professional historian, and I do not have an editor that tells me when I should leave some things well alone.

So why did no one tell David Horspool that arguing Oliver Cromwell was a monarch is not the cleverest thing to do. And swim alone he does.

It is not as though we have hundreds of historians who favor this type of historiography. What was the nature of the discussion at Penguin? I would have paid money to hear it. Maybe If he had done it in the form of a counterfactual argument, then this is a different matter. It is a little strange that the book does not actually present an argument for Cromwell inclusion as a monarch.

But Oliver Cromwell was not a king, and therefore it is no accident that some of the greatest historians of the subject refused to label him that.

So why does a giant publishing firm ask a historian to argue the opposite? One answer would be the type of series that Penguin wants to have. The last ten years or so have seen an increase in studies that concentrate on Royalism. While there is nothing wrong with that, unfortunately, most of these studies have attempted to rehabilitate the monarchy (see my review of Charles I: An Abbreviated Life by Mark Kishlansky[1].

David Horspool book is a well-written introduction to the life of Cromwell. I had expected at least a defense of why Cromwell was listed in a series on monarchy, but this does not happen.
I am also a little disturbed that no historian so far has attacked this mild falsification of history. I may be old fashioned, but if this book appeared twenty years ago, there would have been a historian’s fight.

So far, the only review of this book has been in the Guardian[2]. Which unsurprisingly decides to take a somewhat cynical view. The reviewer tells us “the controversial inclusion of Oliver Cromwell in the Penguin Monarchs series will doubtless elicit a few tuts of disapproval from royalists. Well, it should elicit a few from left minded historians.

You get the feeling that David Horspool was not entirely happy with the prospect of defending the impossible conceding that the inclusion of Cromwell in the list of monarchs should be “in square brackets”. However, Horspool as the Guardian review says, “reminds pedants, monarchy means a sole ruler, not necessarily the holder of a royal title.”

This really is stretching things a bit, and it is not something a serious historian should or would stoop to.

This brings me to my main critique of the book. In some ways, the book the book expresses a growing problem modern historiography of the English Revolution in that the issue of class is not actually discussed.

As Horspool brings out Cromwell was a member of the gentry.  If the reader is concentrating whether Cromwell was a king, then Cromwell’s connection with the revolution is entirely submerged.

As the Historian, Brian Manning brings out in his review[3] of Oliver Cromwell by Roy Sherwood “Charles was a hereditary monarch. Sherwood shows that Cromwell became a ‘king in all but name’, but he does not consider that before the civil war, despite his aristocratic connections and his status as a ‘gentleman’, his economic position, as John Morrill shows the English Revolution[4], ‘was essentially that of a yeoman, a working farmer’: ‘Cromwell’s economic status was much closer to that of the "middling sort" and urban merchants than to that of the county gentry and governors. He always lived in towns, not in a country manor house; and he worked for his living. He held no significant local offices and had no tenants or others dependent upon him beyond a few household servants.’

He continues, “Karl Kautsky pointed out that the role of ‘great men’ in history should be related to the group or class which they represented or symbolized. In the English Civil War Charles, I defended aristocracy and episcopacy, and his strength came from his party. Sherwood should have asked who made Cromwell ‘king in all but name’. He should have considered the power-hungry politicians, the seedy financiers, and the sycophantic journalists who pushed him forward and, more broadly, the lords of manors who rightly trusted him to defend their rank and property, the clergy who successfully pressed him not to abolish their tithes (the tax which supported them), and the lawyers who managed to keep him from reforms of the legal system that would have reduced their profits”.

The other aspect of Cromwell is that in the last resort his power rested on the New Model Army. He apparently took into consideration that it would not sit well with the army if he became king. I mean they had just fought two bloody civil wars and killed a king. Cromwell knew full well that to take the crown would be political as well as military suicide.

To conclude the book is well written, it does not offer a new perspective on the life of Cromwell. If Horspool is looking for a debate then hopefully a few historians will come out of their comfort zone and give him one.
[1] http://keith-perspective.blogspot.co.uk/search?q=charles
[2] https://www.theguardian.com/books/2017/mar/08/oliver-cromwell-by-david-horspool-review

[3] Brian Manning-The monarchy and the military-(September 1999) Socialist Review 233.
[4] John Morrill is the author of The Nature of the English Revolution (Longman, 1994)
Posted by A Trumpet of Sedition at 12:55