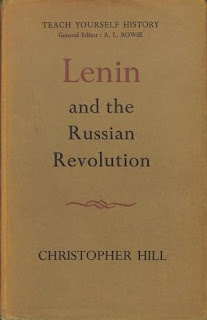 During the current celebrations of the Centenary of the 1917 October Revolution, the attack on Vladimir Lenin and the Russian Revolution, in general, has been particularly severe even by common media standards. According to them, Lenin was a brutal dictator, and the revolution was a disaster.

In his article, [1]The denunciation of the Russian Revolution in Germany the Marxist writer Peter Schwarz makes this point “In Germany’s criminal code there is a paragraph declaring the slandering of the memory of the dead to be a criminal offence. Punishment for such crime ranges from a fine to two years imprisonment. This appears not to apply to historical figures. If one reviews the articles, contributions on radio and television, and films to mark the centenary of the October Revolution in Russia, the principal rule that applies is: “anything goes.”

This brief review of Christopher Hill’s book on Lenin and the Russian Revolution is my contribution to the celebration of such a seminal event in world history. The October revolution despite what the highly paid lackeys in the media say is an essential lesson for working people to study and learn from, as Schwarz says “that one of the most significant transformations in world history, which influenced the 20th century more than any other event, could not be dismissed with a tirade of insults against Lenin and the Bolsheviks but required a serious study of its social and political driving forces”.

So when writing on such a controversial subject, a serious historian must make an objective assessment of both the revolution and one of its leaders. Hill despite being hampered by his membership of a Stalinist party attempted to make just that. He did not always make it. After all writing about the Russian Revolution in the middle part of the 20th century was a dangerous exercise for any of the historians in the Communist Party Historians Group(CPHG) To insulate himself from attack Hill states that he took advantage of the collaboration between Britain and the USSR during wartime to write the book.

“I wrote Lenin and the Russian Revolution in 1945-46, during the brief period when it appears the wartime friendship between England and the Soviet Union would continue to prosper, painful though it is to think so today”.

Despite not being his best work the book nonetheless laid down some markers that would be examined in later works of a much higher standard. Hill makes this point “In writing the book I made a point of drawing parallels between the 17th-century English Revolution, the French Revolution of 1789, and the Russian Revolution of 1917. In England after 1660, and in France after 1815, there was a severe reaction against the preceding revolutions; but 1688 in England and 1830 in France showed that there was to be no restoration of the old regimes”.[2]

The book was part of a series called “Teach Yourself History” with the historian AL Rowse the general editor. Apparently, Hill became a bête noir of A L Rowse who states "When it arrived, I was taken aback - a work of stone-walling Stalinist orthodoxy, not a whit human."While being friends with Hill, Rowse’s vituperation towards Hill’s research on the radical groups of the English Revolution shows a man hostile to the genre of “History from below”.This quote is taken from Historians I have Known “ As if the thinking of people who don’t know how to think has any value Hobbes,Milton, Selden, Clarenden, Halifax, Locke !Yes; but not of the people at Large”.shows a level of class hatred that would not look out of place in the most right-wing academic circles.

While it was bought in large quantities by the general public, the book was attacked both inside and outside of academia. John Gollan in his short review manages to attack Hill from the right by heavily criticising him for his relatively light-minded treatment of Leon Trotsky.

He accused Hil of “utterly insufficient attention was paid to the history of the Communist Party and the struggle around policy in the period immediately before and during Lenin’s illness and death. Hence the role of Stalin as Lenin’s successor, his struggle against Trotskyism is not brought out. In his references to Trotsky, Comrade Hill correctly presents Lenin’s criticism of Trotsky’s role at specific periods of the revolution. However, Lenin did not and could not know that Trotsky and his confederates, already in those days were wreckers and plotters criminally associated with foreign powers.

He continues “Stalin succeeded to Lenin’s leadership, not only because of his mastery of Lenin’s teachings, but because of his record in the pre-revolutionary days, his editorship of Pravda, his work on the national question, his leadership in the insurrection, the decisive role entrusted to him by Lenin in the Civil War, and above all, his leadership of the Party in the critical tense period of Lenin’s illness and death. If this had been done Trotsky’s “History” could never have been included in the bibliography”.[3]

Gollan was not the only person to attack Hill’s contribution to our understanding of Lenin and the Russian Revolution. A Particularly nasty one came from the pen of Adam B. Ulam, in the pages of the New York Review of Books. Ullam wrote “ I have hitherto never sought to reply to or to polemicize with reviewers of my books. However, the review article on Stalin which appeared in your magazine on January 24 raises an issue of such importance that I am forced for the first, and I hope the last, time to break this rule. The issue is: how legitimate is it for a magazine of your standing to commission a review from a person, and for him to write it, on a subject in which he has demonstrated his utter disregard or ignorance of facts? I could adduce several examples to support this judgment, but one, I trust, will be enough. Mr Hill is ironic about my assessment of the Mensheviks. Yet, let me put it to you, your readers, and the Master of Balliol whether one should take seriously any judgment about the Mensheviks or any other facet of Soviet and Russian history coming from a man who can write: “[after January 1918] …the leaders of the Menshevik party disappeared from history as the coadjutors of the White Guards trying with the aid of foreign bayonets to demonstrate the impossibility of the socialist experiments of the Bolsheviks.”

Anybody with a superficial acquaintance with modern Russian history will recognize the outrageous untruthfulness of this statement, but let me rehearse the facts. “In mid-1918 when the Soviet government was locked in military combat against the counterrevolutionaries and the interventionist armies… [the Mensheviks] moved closer to the Bolsheviks by pledging ‘unqualified support’ to the government and calling on their followers to join the Red Army…. Apparently, in return for this loyalty, the Bolsheviks legalized the Menshevik party in November 1918.” The Mensheviks’ most prestigious leaders, Martov and Dan, called for “unconditional support of Bolshevism in its resistance to international imperialism and its internal and counterrevolutionary allies.” Were I to write and then maintain in print for over twenty years that the Levellers were agents of the French government, would Mr Hill grant that I was a suitable reviewer for his books on English history?"

In the interest of fairness, it is worth noting Christopher Hill’s reply “I agree with some of Professor Cameron’s points. In my review I noted as an interesting fact that the authors of two serious books on Stalin, written from very different viewpoints, agreed in rejecting the Trotskyist myth without accepting the Stalinist myth; and I observed that freedom to reject one of these myths without having to rely on the other gave the historian writing now about the Russian Revolution an advantage over even so great a historian as Isaac Deutscher. Professor Cameron, I gather, prefers the Trotskyite myth. This is fair enough, but one does not have to choose, and if one did have to choose literary merit would not necessarily be the best criterion. Any myth with the survival power of Stalinism must surely bear some relation to reality, which the historian should investigate: this has nothing to do with whether one likes it or not. I agree about the literary power and distinction of Trotsky’s History of the Russian Revolution, as of Clarendon’s History of the Rebellion; but the literary power of the latter is no reason for preferring his myth to—say—Oldmixon’s.

With reference to Mr Ulam’s letter, it is not for me to defend your choice of a reviewer. I willingly admit to being no expert on the Russian Revolution. Mr Ulam has to go back twenty-seven years to find anything written by me on the subject. For this reason, I tried to concentrate on methodological questions raised by the two interesting books I was asked to review. The reductio ad absurdum argument of Mr Ulam’s last sentence, however, suggests an ironical addition to what I called the “recurrent situations” of revolutions: after their defeat, some of the Leveller leaders did in fact attempt to overthrow the Cromwellian régime in agreement with the Spanish government[4].

From an orthodox Marxist perspective, there are many more important and better criticisms of this book and Hill’s outlook. Like I said earlier the Russian revolution was dangerous territory not only for Hill but the other distinguished historians in the Communist Party.

Before 1956 these historians were lightly policed by the Communist Party Cultural Committee this not to say they could write anything they wanted. As Edward Thompson explained the CPHG largely policed their own work. As John McIlroy explains they “ by and large, knew and respected the rules of the game. The CP leadership’s unspoken interdict on researching into recent history, particularly the history of their own party, was on the whole accepted by the group. Allegiance to Stalinism moulded their Marxism, and, if it did not entirely stifle good scholarship, it undeniably constrained their history. As Hobsbawm remarked, ‘in the years 1946-56 the relations between the Group and the Party had been almost entirely unclouded. [The Historians]… were as loyal, active and committed a group of Communists as any…’[5]

Hill continues the Stalinist tradition of attacking Trotsky’s role and political outlook during the Revolution.As Ann Talbot relates “Hill’s sole attempt at modern history, his study of Lenin is undoubtedly his weakest book. It is marred by repeated attacks on Trotsky, who is dismissed as one of the “Westernising theoreticians” of the revolutionary movement. Discussing whether Trotsky could ever have become the leader of the Bolshevik Party after Lenin’s death, Hill concludes, “Such a view exaggerates, I think, the importance of Trotsky in the party.”

As Hill should have known, the British government were well aware of Trotsky’s importance since they would not allow him into the country when he requested asylum. However, still Hill’s historical faculties would not let him deny that Trotsky was a great orator, that he organised the insurrection which brought the Bolsheviks to power, and nor does he avoid giving Trotsky more references in the index than Stalin. At no point does Hill repeat the false charges that the Stalinists made against Trotsky and his followers at the Moscow trials. Even in this book, which certainly hacks work, Hill did not make himself fully a Stalinist hack. His criticisms of Trotsky are ill-judged and betray an ignorance of his subject, rather than being malicious and dishonest. He retained a core of intellectual honesty in a work that was written in 1947 as the lines were being drawn for the Cold War, which was designed to defend the Russian Revolution and not to win him friends in high places at home or in the Kremlin.[6]

Like any Christopher Hill book, I would recommend the book. Unlike Hill’s other work I would say the reader sometimes needs to hold their nose. As Talbot says, it is a hack work but is a decent read and worth reading to see how far Hill as a historian moved away from the book.