The Five: The Untold Lives of the Women Killed by Jack the Ripper- Hallie Rubenhold-Doubleday (£16.99). 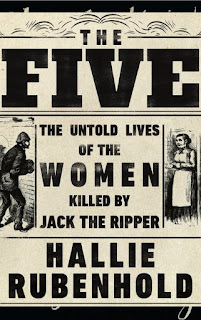 Hallie Rubenhold’s new book is a groundbreaking study of the five women murdered by Jack the Ripper. Rubenhold has rescued these women from the condescension of history albeit 130 years after they were murdered.

It would seem to be the case that the more that has been written about the five, the less we know about them. Much of the historiography on the murders has centred on the murderer Jack the Ripper. As one reviewer put it “Forests have been felled in the interests of unmasking the murderer, but until now no one has bothered to discover the identity of his victims”.

Rubenhold said: “The stories of these women are each extraordinary and unique, and for nearly 130 years the media has over-simplified their true histories. The Five have always been regarded as society’s waste – filthy, ruined, pitiful drink-sodden whores, yet not one of them began life this way, and none of them came from the East End. They were from Sweden, Wales, the Midlands. Their fathers and husbands were printers, carpenters, gentleman’s valets, coachmen, and soldiers in the Queen’s Life Guard. Their daughters attended fee-paying schools; their fathers-in-law were property developers. They glimpsed Queen Victoria and rubbed shoulders with Charles Dickens. The Five seeks to restore these women their humanity and reclaim Jack the Ripper narrative in favour of his victims."

It is clear that Rubenhold has spent a lot of time deep mining the archives and she shows how skilful a historian she is when she manages to tell a fascinating tale from so little information. Coroner’s inquests unreliable newspaper reports, parish registers; court registers; birth, marriage and death records; rate books and the archives of the London workhouses. From these records, she manages to trace the murder victims from birth the death. Because they were born female, Rubenhold argues, “their worth was compromised before they had even attempted to prove it.

She continues “what if virtually everything we had ever come to assume about these five women was largely untrue? What if the degree to which they can even be called ‘prostitutes’ when considered within the context of their communities and the broader experience of the poor, the working class woman is questionable? What if we learned that none of them was born in Whitechapel, or even in the East End, but ended up there after living full lives elsewhere? What if we learned that these women had been either wives or mothers or both? What would we think of ourselves and our society for never having questioned these things?”

Rubenhold has sought in this book to rescue these women from the condescension of history. She successfully demolishes the lies and calumny built up over 130 years that all the women were prostitutes that deserved all they got.

Rubenhold correctly shows that these working-class women who because of the inequities of the capitalist system once they stepped out from under its vice-like grip are preyed upon by a psychotic killer who got away with murder because no one cared about the victims. Rubenhold writes "In order to gawp at and examine this miracle of malevolence, we have figuratively stepped over the bodies of those he murdered, and in some cases, stopped to kick them as we walked past.”

Rubenhold’s book is a narrative based piece of history. While agreeing with her need to correct the historical record I have a problem with her writing out of history the figure of Jack the Ripper. Like it or not the figure of Jack the Ripper is indicative, and the sharpest expression of the treatment given out to working-class women. I say working class women because it is noticeable that they were working class and not middle or upper-class women who had a much easier time under capitalism despite being exploited themselves but not as much as working-class women who faced life or death questions every day. The leaving out of Jack the Ripper is far too much of a concession to the Me Too movement that has now crept into the study of history

There are weaknesses in narrative based historiography in that if it is not grounded in a scientific understanding of class relations in any given society in any given century it tends to gloss over very deep-seated class antagonism that produces shocking developments like the murder of five working-class women. Who were probably not the only women to be murdered in that period.

While professing a love of Lawrence Stone’s The Family, Sex and Marriage in England her book could have done with a deeper insight into class relations towards the end of the 1880s. Rubenhold to her credit does not entirely ignore the working class and its conditions She writes “the poor were judged to be lazy and immoral paupers who refused to do honest work, bred bastards and enormous families while 'living off handouts'.” Welfare reforms designed to “compel the indigent to lead moral, hard-working lives” by driving them into workhouses, instead forced many onto the streets where they were at the mercy of the genuinely depraved”.

However, the working class was not just exploited class; it was a revolutionary class and did not take lying down its treatment by capitalism. It is quite striking that given the life span of the first woman murdered,namely Polly she would have witnessed the development of Marxism, Marx’s writing on the 1848 revolutions, Engels The Condition of the Working Class in Britain, the vast and explosive development of the Chartist movement and finally the publication of Marx’s Das Kapital and the growth of the “New Unionism”

On this New Unionism Engels wrote “What I consider far more important than this momentary fashion among bourgeois circles of affecting a mild dilution of Socialism, and even more than the actual progress Socialism has made in England generally, that is the revival of the East End of London. That immense haunt of misery is no longer the stagnant pool it was six years ago. It has shaken off its torpid despair, has returned to life, and has become the home of what is called the “New Unionism,” that is to say, of the organisation of the great mass of “unskilled” workers. This organisation may to a great extent adopt the form of the old Unions of “skilled” workers, but it is essentially different in character. The old Unions preserve the traditions of the time when they were, founded, and look upon the wages system as a once-for-all established, final fact, which they at best can modify in the interest of their members. The new Unions were founded at a time when the faith in the eternity of the wages system was severely shaken; their founders and promoters were Socialists either consciously or by feeling; the masses, whose adhesion gave them strength, were rough, neglected, looked down upon by the working-class aristocracy; but they had this immense advantage, that their minds were virgin soil, entirely free from the inherited “respectable” bourgeois prejudices which hampered the brains of the better situated “old” Unionists..[1]

While Rubenhold has a burning sense of injustice at the treatment of women in capitalist society and has a deep empathy towards the working class, in general, this is not enough to do the type of history she would like to write. In order to do this type of social history, the historian needs at least a working knowledge of the materialist conception of history.

As Engels wrote “the determining factor in history is, in the final instance, the production and reproduction of the immediate essentials of life. This, again, is twofold. On the one side, the production of the means of existence, of articles of food and clothing, dwellings, and of the tools necessary for that production; on the other side, the production of human beings themselves, the propagation of the species. The social organisation under which the people of a particular historical epoch and a particular country live is determined by both kinds of production: by the stage of development of labour on the one hand and the family on the other. The lower the development of labour and the more limited the amount of its products, and consequently, the more limited also the wealth of the society, the more the social order is found to be dominated by kinship groups. However, within this structure of society based on kinship groups the productivity of labour increasingly develops, and with it private property and exchange, differences of wealth, the possibility of utilizing the labor power of others, and hence the basis of class antagonisms: new social elements, which in the course of generations strive to adapt the old social order to the new conditions, until at last their incompatibility brings about a complete upheaval. In the collision of the newly-developed social classes, the old society founded on kinship groups is broken up; in its place appears a new society, with its control centred in the state, the subordinate units of which are no longer kinship associations, but local associations; a society in which the system of the family is completely dominated by the system of property, and in which there now freely develop those class antagonisms and class struggles that have hitherto formed the content of all written history.[3]

Despite having the weaknesses mentioned above the book is a cracking read. Rubenhold has produced an excellent piece of narrative-based history. She is to be congratulated in bringing the lives of these unfortunate women to a wider audience and in doing so correct the historical record. It is hoped that her next book is based on a little more historical materialism than this one has shown.

[1] Frederick Engels, London, January 11th, 1892;
First Published: in the English edition of The Condition of the Working-Class in England, New York, 1892;
Transcribed: by Andy Blunden.
[2] Manifesto of the Communist Party-Marx-Engels
[3] Origins of the Family, Private Property, and the State- Frederick Engels
Posted by A Trumpet of Sedition at 10:24