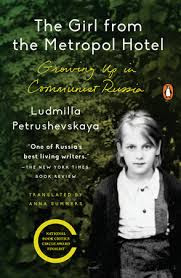 Generally speaking, art is an expression of man's need for a harmonious and complete life, that is to say, his need for those major benefits of which a society of classes has deprived him. That is why a protest against reality, either conscious or unconscious, active or passive, optimistic or pessimistic, always forms part of a really creative piece of work. Every new tendency in art has begun with rebellion.

Leon Trotsky-Art and Politics in Our Epoch (1938)

Ludmilla Petrushevskaya's The Girl from the Metropol Hotel is a powerful memoir of her childhood in Stalinist Russia. In an already overcrowded market of memoirs emanating from the Stalinist betrayal of the October revolution and the rise of a Stalinist totalitarian state, this is one of the better ones. Anna Summers excellently translates the book.

Petrushevskaya's slim memoir is beautifully written, which is all the more surprising given the level of brutality she and her family suffered as“an enemy of the people to our neighbours, to the police, to the janitors, to the passers-by, to every resident of our courtyard of any age. We were not allowed to use the shared bathroom, to wash our clothes, and we didn’t have soap anyway. At the age of 9, I was unfamiliar with shoes, with handkerchiefs, with combs; I did not know what school or discipline was.”

Petrushevskaya's family was no ordinary family for it contained many leading Bolsheviks who were either murdered or left to rot in prison, six of her family were convicted and given 10-year sentences at hard labour, on the order of Joseph Stalin. Petrushevskaya's grandfather, Nikolai Yakovlev, was a world-renowned linguistics scholar. Her grandmother married Yakolev after turning away the romantic assignations of the revolutionary poet Vladimir Mayakovsky.

Petrushevskaya's great-uncle was a leading organiser of the 1905 revolution a curtain-raiser to the 1917 October Revolution. Her great-grandfather, Dedya, joined the Russian Social-Democratic Workers Party in 1898.

Yakolev is of particular interest because he crossed swords with Stalin over linguistics. Yakolev was an early advocate of Marrism. What should have been a comradely discussion over their differences ended when Stalin sent Yakolev to the Gulag. Stalin justified his differences with the Marrist's in a Pravda article entitled Marxism and questions. He denounced Marrism and accused its adherents of being anti-Marxists. Yakovlev was one of the lucky ones in the sense that he could have been shot straight away.

It is clear from Petrushevskaya work that she is not overtly political and never really understood the political nature of Stalin's purges. Petrushevskaya is fortunate that she lives in a country that produced one of the greatest Marxists scholars who wrote extensively on Stalin's purges. The great Russian historian Vadim Rogovin described why “in the struggle for power and income, the bureaucracy (was) forced to chop off and crush those groups who (were) connected with the past, who know and remember the program of the October Revolution, who are sincerely devoted to the tasks of socialism. The extermination of the Old Bolsheviks and the socialist elements of the middle and younger generations is an important link in the anti-October reaction.” [1]

Petrushevskaya survived the Stalin period but found it impossible to get published during the Brezhnev years. Petrushevskaya had described this as a time when  “Truth was in general forbidden.”Her books which tackled crime, domestic violence, alcoholism, and illness were way too radical for a government whose very anti-working policies caused so much social inequality. Even Novy Mir, the supposed liberal journal refused to publish her stories, saying “withhold publication—but do not lose track of the author.”

During the era of Gorbachev's perestroika, she had a measure of success in that her books were being published. She continued to write about issues that highlighted social inequality in Soviet society. As Sophie Pinkham put it "Her characters were preoccupied, as were citizens under Stalin, with food, housing, and violent death”.[2]

Her exposure of social inequality angered the bureaucracy. Her phone was tapped, and she was under constant surveillance. She was indicted for six months after criticizing Gorbachev's military actions in Latvia and Lithuania.

Ludmilla Petrushevskaya is still alive and long may she continue writing her books. They are worth reading and deserve a wide readership. The issues emanating from her difficult childhood and issues surrounding her family especially the debate over Soviet linguists should provoke further study. It is for that reason that I have added a recommendation for further reading.

Posted by A Trumpet of Sedition at 09:58