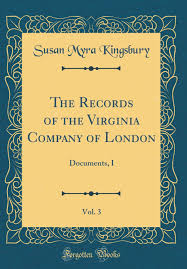 For more than a century, Susan Myra Kingsbury has been a major figure in the historiography of early colonial Virginia. Her edition of The Records of the Virginia Company of London published between 1906 and 1935 offers an essential foundation for all subsequent studies of the early years of the first permanent English settlement in North America. The works published last year (2019) to mark the four-hundredth anniversary of the establishment of the Virginia Assembly and the almost simultaneous arrival of the first African slaves inevitably drew on her volumes.

Susan Kingsbury was born in San Pablo, California in 1870 and was educated in that State before becoming a teacher at Lowell high School in San Francisco from 1892 to 1900. Subsequently, she went to Columbia University in New York to study colonial economic history.

Whilst a student there, she travelled to England to collect documentary material for her Ph.D. thesis entitled An Introduction to the Records of the Virginia Company of London for which she was awarded her doctorate in 1905. Thereafter, her career took her into posts in industrial and technical education, economics and social work. She retired as Professor of Social Economy at Bryn Mawr College in 1936 and died at the age of 79 in November, 1949.

Unfortunately, no copy of her thesis appears to be available on-line at present. However, given its length at just over two hundred pages, it is likely that it was identical to the work published by the Government Printing Office in 1905 entitled, An Introduction to Records of the Virginia Company of London with a Bibliographical List of the Extant Documents.

It was produced with a foreword by Herbert Putnam, the Librarian of Congress, praising her work and the counsel of her adviser, Professor Herbert L. Osgood of Columbia University. A year later, when the first two volumes of The Records of the Virginia Company of London edited by S.M.Kingsbury (and containing the Court Book of the company from 1619 to 1624) were published, Herbert Putnam and Herbert L. Osgood again provided prefatory remarks. The text of Dr Kingsbury’s introduction was identical to that of 1905 (and probably to that of her thesis as well).

The extensive list of documents she provided for the company and colony from just before 1609 also appears to be identical to that published in Volumes 3 and 4 of The Records of the Virginia Company of London which appeared in 1933 and 1935 respectively. A handful of emendations were made to include material from the proceedings of the Privy Council relating to Virginia and to note that one or two documents could no longer be traced. Some material, which had come to light since 1905-1906 and which had been published elsewhere, e.g. in the Sackville Papers before 1623, was omitted. But, to a very large extent, all four volumes edited by Susan Kingsbury reflected work she had done by 1905.

This coverage of the extant archives was not, however, complete. She had reproduced only seventy eight of the documents relating to Virginia from the Ferrar Papers held in Magdalene College, Cambridge. As David Ransome’s more recent work has shown, there were five hundred and fifteen such documents in that collection. Similarly but on a much smaller scale, her assumption that the colonial papers of the Duke of Manchester then held in the Public Record Office in Chancery Lane, London constituted the entire archive of Sir Nathaniel Rich and the 2nd Earl of Warwick was also mistaken.

There were and are scattered pieces of evidence related to Virginia’s colonisation still to be found elsewhere in English archives. When Wesley Frank Craven composed his study of The Dissolution of the Virginia Company (published in 1932), he paid a thoroughly well-deserved tribute to Susan Kingsbury’s invaluable edition of the company’s records. He was right to do so as later historians would wholeheartedly agree but the hunt for supplementary sources still.

Posted by A Trumpet of Sedition at 07:36