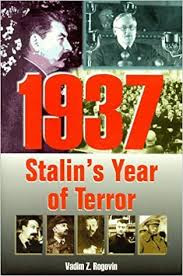 "Material from the Soviet archives which has become available in recent years, as well as the publication of many new memoirs, has helped the author accomplish the tasks set by this book: to investigate the mechanism of the origin and the relentless spread of the Great Terror, and to discover the reasons why this mass terrorist action became not only possible but also so successful".

"The director is not appealing to reason or criticism. He wants to crush the rights of reason with the massive scale of the frame-up, reinforced with executions."
Leon Trotsky

"Trotsky was a hero of the revolution. He fell when the heroic age was over."

Vadim Zakharovich Rogovin's 1937: Stalin's Year of Terror was one of a seven-volume study that set out to prove that there "Was An Alternative to Stalinism and that alternative came from Leon Trotsky's Left Opposition.

If there was one figure, Stalin feared the most it was Leon Trotsky and the International Left Opposition. Trotsky without the resources of state power exposed the treachery of the Stalinist bureaucracy and advocated a political revolution to overthrow Stalinism.

Stalin could not defeat Trotsky politically hence the need for the Moscow Trials which according to Rogovin the main goal "was to create the conditions for politically discrediting and physically exterminating the entire communist opposition in order to behead the population, to deprive it for many years of a political avant-garde and therefore of the ability to resist the totalitarian regime. The class struggle in the USSR assumed, essentially, its sharpest form - civil war. This civil war, unlike the civil war of 1918-20, took the specific form of state terror directed at precluding any political activity by the masses".[1]

In this book, Rogovin cites numerous myths that surround the events of 1937 that were regurgitated over the following decades. In a lecture given in the United States, he says "there were two basic forms. The first could be called the Stalinist school of falsification.

With the development of "glasnost" [openness], Rogovin hoped that these myths would be vanquished. During Glasnost and Perestroika, millions of people in the USSR sought answers to complex historical questions. This led to a sharp increase in sales of mass-circulation newspapers, as well as literary and political journals. It soon became very clear to Rogovin that issues of the Great Terror and Stalinism were far from being clarified but were instead being used by many anti-communists to sully the name of socialism.

As Rogovin points out the origins of many of the so-called new myths were peddled at the time of Khrushchev's 1956 report at the Twentieth Congress of the CPSU. While many communists and socialists thought this action by Khruschev would open up the possibilities of a struggle against the bureaucracy prompting the poet and writer Bertolt Brecht to write  "The liquidation of Stalinism can take place only if the party mobilises the wisdom of the masses on a gigantic scale. Such a mobilisation lies along the road to communism".[3]

Brecht would be disappointed as any figure that was capable of opposing Stalinism had all but been wiped out in the purges. The 1956 speech was not a political break with Stalinism but a mechanism in which to deal with the raging political and economic crisis that washed world Stalinism.

Khrushchev delivered his speech with blood dripping from his hands. He was as Rogovin points out implicated in all the major crimes committed by the Stalinist bureaucracy. Khrushchev said "We must affirm that the party fought a serious fight against the Trotskyists, rightists and bourgeois nationalists and that it disarmed ideologically all the enemies of Leninism. The ideological fight was carried on successfully ... Here Stalin played a positive role."[4]

Rogovin's book, while examining the political implications of the Great Terror also expands on the significant interest shown by many figures who stood aloof from socialist politics. In the novel Doctor Zhivago, Boris Pasternak used his hero to express the following thoughts: "I think that collectivisation was a mistaken and unsuccessful measure, but it was impossible to admit the mistake. In order to hide the failure, it was necessary to use all means of terror to make people forget how to think and to force them to see what did not exist or to prove the opposite of what was obvious. Hence the unbridled cruelty of the Yezhov period, the declaration of a constitution never intended to be applied, and the introduction of elections not based on elective principles." [5]

Rogovin points out that Pasternak's statements bear a significant resemblance to the ideas of Trotsky. Rogovin also points out that" Pasternak's explanation of the tragedy during the "Yezhov period" also displays unmistakable proximity to Lenin's prognoses made in 1921. In referring to the alternatives Soviet Russia faced at that time, Lenin saw two outcomes from the contradictions which had accumulated by then: "ten to twenty years of correct relations with the peasantry and victory is guaranteed on a world scale (even given delays in the proletarian revolutions which are growing).[6]

Rogovin's mention of writers like Pasternak is interesting in that it highlights the gap between people like Pasternak who were non-political but would stand up for a principle against a coterie of Soviet writers led by Aleksandr Solzhenitsyn who would not[7]. Solzhenitsyn's work was hardly a bastion of objectivity on the matter of the Great Terror.

His book 'Gulag Archipelago' fails even to mention the main defendants in the Moscow Trials  Leon Trotsky and his son Leon Sedov. He writes next to nothing of the heroic struggle of the Left Opposition against Stalinism. Solzhenitsyn started as a radical critic of Stalinism but ended up being a virulent anti-communist and a Great Russian chauvinist.

He vomited up all the old Stalinist lies that Stalinism was an 'outgrowth' of Bolshevism and was the true face of the Russian revolution. Rogovin's book thoroughly shatters these lies and with it Solzhenitsyn's thesis and reputation.

Rogovin's thoroughness stretches throughout the book. For the general reader, this might make reading a little daunting. The perseverance of the reader is rewarded with a detailed study of what happened after the Russian revolution. The book is hard sometimes going not because of Rogovin's writing which is stunning and lucid but because he does not spare the reader any detail as to what happened to not only the old Bolsheviks but anyone who came into contact with them.

Group shootings with almost daily tens of prisoners sent into the wilderness. According to Rogovin, "they shot not only the Trotskyists themselves, but any members of their families who were with them". He goes on: "When a husband was shot, his imprisoned wife was automatically sent to be shot; with the most significant oppositionists, their children who had reached the age of 12 were also subject to shooting."

The New Stalin School of Falsification.

At the same, this book was translated by Fred Choate on behalf of Mehring books there appeared a new Stalin school of falsification. As Rogovin correctly states: "These ideological operations served the same purpose as the historical falsifications produced by the Stalinist school: to cauterise, deceive, distort and poison the historical memory and social consciousness of the Soviet people."[8]

The release of the book happened to coincide with as one writer puts it with an   "orgy of capitalist propaganda which flooded the post-1989 Russia has for the time being crowded out those voices like Rogovin, demanding a real examination of the Moscow Trials. The bourgeois heirs of the Stalinist bureaucracy that led society to the impasse of the late 1980s cannot carry through this examination. Therefore, in the land of the October revolution and the giants which are produced, the real lessons of these events and its subsequent degeneration along the lines of Stalinism remain unknown by the majority. Trotsky is a slandered figure in modern-day Russia, particularly by the pro-capitalist parvenus who have arisen from the bureaucracy. In their enthusiastic embrace of capitalism, they wish to obliterate all of the real lessons of Stalinism and the heinous purge trials. Rogovin's book provides us with the political ammunition to counter this".

Much of this orgy of Stalinist falsification came from academia and in particular from the pen of Ian Thatcher and Geoffrey Swain. The Marxist writer David North points out "The years since the fall of the USSR have seen the emergence of what can best be described as The Post-Soviet School of Historical Falsification. The principal objective of this school is to discredit Leon Trotsky as a significant historical figure, to deny that he represented an alternative to Stalinism, or that his political legacy contains anything relevant in the present and valuable for the future. Every historian is entitled to his or her viewpoint. But these viewpoints must be grounded in a serious, honest and principled attitude toward the assembling of facts and the presentation of historical evidence. It is this essential quality; however, that is deplorably absent in two new biographies of Leon Trotsky, one by Professor Geoffrey Swain of the University of Glasgow and the other by Professor Ian D. Thatcher of Brunel University in West London. These works have been brought out by large and influential publishing houses. Swain's biography has been published by Longman; Thatcher's by Routledge. Their treatment of the life of Leon Trotsky is without the slightest scholarly merit. Both works make limited use of Trotsky's writings, offering few substantial citations and even ignoring major books, essays and political statements.[9]

After Swain and Thatcher, there came a veritable flood of books that sought to further The Post-Soviet School of Historical Falsification. One particular is worth mentioning is Grover Furr's Stalin Waiting For The Truth!. Furr believes that Stalin committed no crimes; the charges against him are a fabrication. Not a single accusation holds up. On the evidence, according to Furr, Stalin committed no- atrocities. One of Furr's books if you could call them that was entitled "Khrushchev Lied".

It is hard to know where to start with Furr's unhinged writings. The American professor of Medieval English literature at Montclair State University is an unrepentant Stalinist but the fact that Furr can even get a hearing is down to gentlemen like Swain, Thatcher and Robert Service. Furr is "only a pawn in their game". A terrible price continues to be paid for the falsification of history and the denial of objective truth.

To conclude, it is hoped that people will read Rogovin's work in Russia and throughout the world, not just to honour but to fight for what he believed in.

Posted by A Trumpet of Sedition at 10:31