A Reply To Ella Whelan's The 21st century Bolshevik.

The subheading for Ella Whelan's article is "Brexit showed the ruling elite is still terrified by Trotsky's ideas of working-class upheaval". At the same time, Whelan is correct in this assumption but off the mark on the rest of the article.[1]

Calling Trotsky a 21st Century Bolshevik while correct is only done so from the standpoint of negating his revolutionary ideas in order to align him with one or more faction of the British ruling elite. Whelan is not the first writer to link Trotskyism to one or more sections of the ruling elite.[2]

Whelan's article contains a degree of flippancy and cynicism you would expect from a writer who writes for a magazine that makes the Spectator magazine look like the Communist Manifesto. She also seems to have a fixation with Leon Trotsky having written a previous article for the Critic entitled: Trotsky's lesson for dealing with Covid-19.[3]

Whelan is not the only former radical to warn of the dangers to the ruling elite of Trotsky's ideas. Another journalist who now writes for the Daily Telegraph Janet Daly warned a good while back that Trotsky and his ideas should not be allowed to save socialism.

Daly was a radical in the sixties but soon shed that cloak of radicalism and like a number of her generation shifted very far to the right. Daly writes "In the 1970s, as I clung to my Marxist convictions, I heard an interview with Sir Keith Joseph, one of the great architects of the Thatcherite revolution. He described the dangers of what he called "the pocket-money society." If the state provided all of the basic human needs—housing, health care, education, care for the elderly—, it left nothing for people to provide for themselves, other than the more trivial recreational things. Their earnings became like children's pocket money, to be spent on toys or self-indulgence. The state took all of the significant economic choices of adult life out of their hands, diminishing them as responsible, moral beings. Joseph's words did not convert me on the spot, but they shook my beliefs to the roots because they chimed so convincingly with the evidence that I saw around me".[4]This blind political stupidity does not need any comment to suffice to say if Whelan wants to know where she is going to end up politically, she should look no further than to Janet Daly.

Whelan has now assumed Daly's mantle writing "And so it is unsurprising that 80 years after his assassination at the hands of a pick-axe-wielding Stalinist mole, Leon Trotsky (Lev Bronstein). Trotsky was killed by a Stalinist agent, not a mole and why the need to put his former Jewish name in brackets. A name that he has not been associated with for over ninety years.

The article shows the author's laziness and political proclivities in this next quote when she writes that Trotsky "has somewhat fallen out of favour. While his revolutionary career and unwavering polemics against the Stalinist regime won him support among lefties from Birmingham to Bolivia during the twentieth century, the slow (and painful) death of the left has all but killed off Trotskyism". 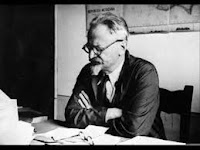 I am afraid Trotsky ideas and influence are very much alive and kicking in the 21st century. Since its founding in 1940, the Fourth International has defended and then expanded the ideas and program that Trotsky fought for all his life. The modern-day form of this organisation is embodied in the form of the World Socialist Website (wsws.org).

Whelan seems to have been so distracted by her attempt to rubbish Trotsky's legacy and that of his modern-day followers that she has not paid too much attention to the fact that the wsws.org has just undertaken a massive technological and political transformation of its website. It can safely be said that for the last 19 years this website has not only defended Leon Trotsky's ideas but has expanded them to the degree that perhaps not even the Old Man could have envisaged.[5]

There is a degree of nervousness and silliness in her article that comes from the fact that Whelan who has read some of Trotsky's writings but does not believe what she writes is true. She writes "For many of today's wannabe revolutionaries, ideas such as the dictatorship of the proletariat or even the transformative power of the working class is not as attractive as jam-making socialists and knighted lawyers in the Labour Party or farting about in fancy dress for"the climate".

Her comment is just silly, hardly worth commenting on and is not true. The significant number of new members that are coalescing around the Fourth International are very serious people, and they are looking for answers to extremely pressing pollical and social problems faced by millions of people all over the world.

Whelan's article is not without insight when she writes "Communism has been so warped by historical inaccuracy it is easy for people to project their prejudices onto it. But not so when she writes "But even so, if all hope of revolutionary Communism has been dead in the water for decades, and all that's left is crass characterisations, why should we remember a man like Trotsky?".

Whelan does say some correct things about Trotsky's life such as this "perhaps the most important thing to know about Trotsky is that his real strength lay in his desire to inspire the masses to take control for themselves. In chapter 24 of My Life, he pays tribute to Nikolay Markin — a shy sailor" with the sullenness of a force-driven in dee" who became an important figure in the revolution and a close friend to Trotsky'ss own family. Trotsky describes how Markin quietly took charge of small things at first — such as the hostility Trotsky'ss family was facing in the"big bourgeois" house they were lodging in — and then larger tasks, including establishing printers to publish The Worker and the Soldier. Inspired by the revolutionary politics of the Bolshevik Party, and the rousing speeches given by Trotsky, workers like Markin realised they had the ability and the ambition to seize control of the means of production.

Trotsky describes how Markin became, for a time," an unofficial minister of foreign affair", writing pamphlets that Baron von Kühlmann and Count Czernin" read eagerly" at Brest-Litovsk. Trotsky writes that it did not matter that he"had no academic degree, and his writing was not free from grammatical error" or that"his comments were sometimes quite unexpected" because Markin" drove the diplomatic nails in firmly, and at the very points where they were most need".

She is wrong however when she writes that Trotsky's writing and aspirations were specific to the historical moment and says "some things have not changed so much. Capitalism might have evolved and transformed itself beyond anything Bolsheviks might recognise, but its inherent weaknesses and limits remain the same. What has changed is our unwillingness to mount a challenge to it."

Trotsky's writings are being looked at now because they still have a contemporary feel to them. The problems that Trotsky grappled with in his day are still ones we have to deal with today.

Whelan in her excitement to bury the influence of Leon Trotsky she repeats one of the old Stalinist slanders of Trotsky that has been repeated down the years and are used by modern-day charlatans to besmirch his revolutionary record.

She writes "But if Trotsky'ss strengths lay in his capacity to organise and defend the revolution, his failings in part contributed to its downfall. Unlike Lenin, who was so adept at managing internal party manoeuvring, Trotsky was incapable of working out what to do with the power struggle following Lenin'ss death. His refusal to take the deputy leadership of the party after 1924, and his blindness to the threat that Stalin posed, were disastrous for the Bolsheviks".

On this occasion, Whelan is really out of depth and shows a simplistic understanding of the history of the Bolshevik revolution and Trotsky's battle with Stalin. As an article in the wsws.org points out  "The conflict that emerged between Stalin and Trotsky was not a subjective fight between two individuals over personal power, but a fundamental battle waged between irreconcilable political programs. The consolidation of power by Stalin, and the bureaucratic dictatorship that he personified, was not the inevitable outcome of the Russian Revolution. It developed out of the conditions of an economically backward workers' state that was surrounded by world imperialism and isolated by the delay of the international and European revolution. A series of revolutionary upheavals were defeated due to the political immaturity of the revolutionary leadership internationally.[6]

To conclude, Whelan asks Why is Trotsky still relevant today? A question she is politically incapable of answering without slandering Trotsky and his modern-day supporters and attempting to tie him to one wing of the British bourgeoisie. She is correct in saying that Trotsky had an "unshakeable belief in a working-class revolution" and it is this that is inspiring millions today".

It is also true as Whelan writes "Unlike other historical figures who live to regret their intervention in history, Trotsky remained resolute in his belief in working-class independence to the end. That is what made him such a threat". So what better than to leave the final word to Trotsky when he wrote: "I shall die a proletarian revolutionist, a Marxist, a dialectical materialist, and, consequently, an irreconcilable atheist . . . life is beautiful. Let the future generations cleanse it of all evil, oppression, and violence and enjoy it to the full".[7]

[7] The Testaments of Trotsky-(February/March 1940)Fourth International, No. 7, Autumn 1959, p. 30. https://www.marxists.org/history/etol/newspape/fi-is/no7/testaments.htm

Posted by A Trumpet of Sedition at 02:27