Review: The Mayflower in Britain: How an icon was made in London, Graham Taylor- Amberley Publishing, 2020. 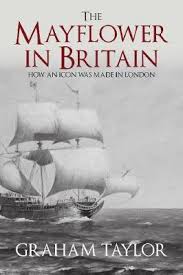 Most accounts of the Mayflower voyage of 1620 concentrate on the history of the Pilgrims in North America, which is hardly surprising as the Mayflower, the Pilgrim Fathers and Plymouth Rock have become part of the foundation mythology of what was to become the United States of America. The strength of this book is that it concentrates on the previous history of the Pilgrims themselves in Holland and England, thereby giving a greater understanding of their motivations and intentions.

The Pilgrims were "Separatists" meaning that they believed that the Church of England was too corrupt to be reformed and so set up their own organisation. This was illegal in England during the reigns of Elizabeth and James I as the Church of England was very much part of the state's mechanism of control. To escape persecution, members of this sect, which would probably be called a "cult" today, emigrated to the Dutch town of Leiden where they set up a community in relative freedom, led by their pastor John Roninson, and where others of their persuasion joined them.

These Separatists, also known as "Brownists" after Robert Browne who had formed an earlier such separate church organisation seen as their forerunner, wanted to set up what would become known as a "gathered church", that is a church based on government by consent of those who agreed a covenant voluntarily. The Leiden group eventually became dissatisfied by their exile. Their children were becoming more Dutch than English, while the Brownists saw the English as God's chosen people, and their economic situation was far from ideal. So they decided to set off for North America to found a settlement which could be run according to their principles. This, however, required financing.

In order to pay for the ships and supplies, the future colonists needed financial backing, which came from a group of London merchants. The book describes well the way in which the early modern London financial services industry operated. The organisers of the Mayflower voyage, therefore, had to get involved with some London merchants, some of whom more or less shared their beliefs, but others just wanted a fast buck from a colonising enterprise. As the book says: "They recognised in each other's causes the mirror image of their own, and all they asked for was freedom to pursue their trade deals or practise their religion" and "progress towards toleration was always interwoven with progress to free trade". What is not mentioned is that one area of free trade in which the London merchants were very keen was the slave trade. We are told that "An Act of Parliament of 1689 'allowed anyone to export cloth anywhere'".[1] Equally important but not mentioned was the Trade with Africa Act 1697 which ended the Royal Africa Company's monopoly in the slave trade. This was where the real money was to be made.

However, whatever the motives of the financial backers of the Mayflower voyage, the Pilgrims themselves seem united in their opposition to slavery and their desire to get on well with the indigenous people they would meet. But, while recognising the obvious good intentions of the Pilgrims, it may be interesting to consider how these principles were put into practice. The book says little about Myles Standish, the Plymouth colony's military leader and slips quickly over his massacre of a group of warriors of the Massachusett nation at Wessagusset. Having been told that this group of warriors intended to attack an English colony, Standish invited them for a meal and murdered them while they were his guests. True, Standish was not himself a Brownist, but he was hired in Holland by the future Pilgrims and they must have known that he was a brutal mercenary. To quote a recent BBC news item: "a hard man who got his retaliation in first". The book, having described John Robinson's objections to the killings,  says:

"Despite Robinson's ethical strictures, the effect was not too damaging. As it was action done in concert with Indian allies there was no racial element as such and the number of Indians supporting Plymouth actually increased".[2]

This is to view the matter from an English perspective. The Plymouth colony was allied with the Pokanoket people led by their Sachem, Massasoit. The Pokanokets had been in dire straits when the Mayflower arrived, devastated by smallpox and threatened by the neighboring Narragansett and Massachusett peoples. Massasoit saw his opportunity and was able to use his alliance with the well armed Plymouth colony to vastly improve his position. Central to this was Standish's massacre at Wessagusset, that seems to have terrified many of the surrounding people into either fleeing or accepting the domination of Massasoit, who was able thereby to form the Wampanoag confederacy under his authority.

Massasoit was a remarkable political operator and there must be a suspicion that he manipulated the whole affair, possibly inventing or exaggerating the threat that the Massachusetts intended to attack the English settlers. Be that as it may, Massasoit was certainly able to use his alliance with the English to destroy his enemies. Edward Winslow, a later governor of Plymouth colony, in describing the effect on other indigenous nations in the locality, wrote:

"This sudden and unexpected execution hath so terrified and amazed them, as in like manner they forsook their houses, running to and fro like men distracted, living in swamps and other desert places, and so brought manifold diseases amongst themselves, whereof many are dead".[3]

This highlights the point that, whatever their intentions may be, colonists arrive in a situation with its pre-existing politics and divisions where they cannot be neutral. And, before long, the Plymouth colony had to contend with another neighbour, the puritan-led Massachusetts Bay colony.

The book is very clear that the Separatists should be distinguished from "Puritans", who agreed that the Church of England was corrupt, but felt it could be reformed. The image of the puritans that emerges from the book is one of viciously intolerant bigots. The problem for the Pilgrims was that, in the decade after John Winthrop set up the Massachusets Bay colony in 1630, 21,000 more settlers arrived, dwarfing the Plymouth colony which, in any case, had a much poorer harbour. From then on it was Winthrop and the puritans who set the pace. Even the radical Brownist, Roger Williams, founder of Providence Plantation on Rhode Island, was instrumental in persuading the Narragansetts to side with the colonists during the 1637 war between Massachusetts Bay and the Pequot nation; not that it did him or his colony any good in the long run as they were excluded from the 1643 military alliance of Massachusetts Bay, Plymouth, Connecticut and New Haven, known as the United Colonies of New England. After the English victory, many Pequot prisoners of war were sold into slavery in the puritan colonies of the West Indies.

Maybe I could take the liberty of using this review to reply to the book's accusation that Danny Reilly and myself, in our book Telling the Mayflower Story: Thanksgiving or Land Grabbing, Massacres & Slavery?:

"held [the Mayflower pilgrims] responsible for the puritan persecutions in New England from Williams to Salem, and they were held responsible, as the first successful colonists in New England, for colonialism, slavery and the genocide of the native Americans".[4]

We clearly need to apologise for a lack of clarity. Our main purpose was to document how the history of the Mayflower has been used as propaganda throughout the history of the USA, frequently to sanitise a White Anglo-Saxon Protestant supremacist version of democracy.

Let there be no misunderstanding, we are not blaming the Mayflower colonists for genocide and slavery, but we are saying that, out of the many thousands of early settlers, the romantic story of this small group has been used consistently to conceal genocide and to whitewash the deep involvement of New England in the business of slavery.

Once the beaver had become virtually extinct through over-hunting, the region needed another source of income and turned to supplying the slave islands of the English Caribbean with horses, timber, candle oil, flour, dried fish and barrels. Rhode Island, the successor to Providence Plantation, became a centre of the slave trade. The 18th century saw the rise of the New England Colonies as slave-carriers rather than direct exploiters of slave-labour as the English slave colonies and New England became mutually economically dependent.

An important trading triangle went between New England to West Africa then on to the West Indies. A slave could be purchased in Africa for 150 gallons of rum which cost £3 to produce in North America and could be sold for between £30 and £80 in Barbados. As Boston, Salem and Nantucket becoming the pre-eminent slaving ports in the region, distilling became the largest manufacturing industry in New England.

While some of the Mayflower settlers obviously maintained their principles, others were swept along with the logic of colonisation. Thus, on the one hand, Roger Williams set up Providence Plantation and, after his earlier misguided alliance with Massachusetts Bay, maintained peace with the Narragansetts for 40 years, while on the other hand, Edward Winslow sided with John Winthrop against religious toleration and ended up as part of Oliver Cromwell's "Western Design" that vastly extended England's slave economy by seizing Jamaica.

The author has spoken of the way in which the Chartists, Karl Marx and Abraham Lincoln have stressed the anti-slavery element of the Mayflower story. More commonly, however, it has been used to promote free-enterprise capitalism and conceal the legacy of genocide and slavery. As Munira Mirza, one time member of the Revolutionary Communist Party, who moved speedily to the right and became Deputy Mayor of London under Boris Johnson who subsequently promoted her to Director of the Number 10 Policy Unit, wrote:

It is the story of how liberal values were born in northern, Protestant Europe and how they eventually flourished throughout America. No one should gloss over the horrific crimes and brutality of many English settlers – they are a stain on history and ought to be acknowledged in the commemorations too. But the early ideas of those first few Pilgrims and City of London investors also drove the eventual defeat of slavery, and have shaped our own modern ideas of equality and justice, democracy and freedom. None of this would have been possible without early capitalism and the forces it unleashed.[5]

While disagreeing with the book's conclusions and rejecting the use that has been made of it by the likes of Munira Mirza, I recognise this book as an important contribution to the debate, with a wealth of detail on the early years of the Pilgrims in Leiden. Anyone interested in the political and organisational world of the dissenting religious sects of the late 16th and early 17th centuries will find it most useful.

Up Down Turn Around, The Political Economy of Slavery and the Socialist Case for Reparations, Caribbean Labour Solidarity

[5] Munira Mirza, Let’s celebrate the pilgrims, not demonise them, UnHerd, 2018

Posted by A Trumpet of Sedition at 11:59