In A Free Republic by Alison Plowden 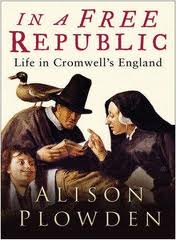 Plowden writes engagingly and thoughtfully. She once described herself as being "in the fortunate position of having been able to turn my hobby into a profession". "There must be thousands of women doing unsatisfying jobs who have a private interest or talent which could be turned to full-time and financial advantage… I do wish more of them would have a go."

The book is well researched, and she makes good use of primary sources such as diaries of some leading figures of the revolution. Her books are prevalent, leading one writer to say on one of her books on the Elizabethan period "Where Alison Plowden excels, is in shrewdly stressing how Elizabeth appreciated the dangers of sexual desire; the general reader will find it wholly informative and very entertaining."

In this book, she does appear to rely heavily on conservatives figures of the revolution, and especially there seems to be an over-reliance on the diary of John Evelyn.

Plowden's background as a writer is interesting. She came to write academic history from her experiences as a writer in television and a very successful one at that. Of this job, she said "I could do better than this with my hands behind my back. Later on, she said "A secretary writing scripts was a little like a performing monkey at the BBC - there was a sort of 'Fancy, what a clever little girl' attitude.

She seems to have been well-liked among her fellow writers with historian and journalist Paul Johnson saying she "writes with verve, brevity and often wit; a most entertaining book which at the same time is accurate and judicious".

Plowden wrote four books on the civil war, The Stuart Princesses (1996), Women All on Fire: Women of the English Civil War (1998)Henrietta Maria: Charles I's Indomitable Queen (2001)In a Free Republic (2006).
The Stuart Princesses, which examines the lives of the six princesses of the House of Stuart. Again the book is a well written and as one writer said she "combines detailed histories of the individual women into a single coherent narrative in a somewhat original way".

She followed up with the book Women All on Fire. This is a strong book in many ways. It is a valuable study of the women who played a significant political and social on both sides of the Civil War.

While she had every right to write a book which mostly stems from a conservative and bordering of royalist historiography In a Free Republic – Life in Cromwell's England, it does tend to be heavily critical of Cromwell's Republic. While it has been portrayed as looking at the reality of life in Cromwell's England, it tends to be a little one-sided. It is not so much what she writes; it is what she chooses to leave out.

A Free Republic does offer a revealing insight into everyday life during the interregnum, from 1649 to 1660. She makes heavy use of primary sources, particularly memoirs, diaries of the social commentator Samuel Pepys, letters, newspapers and state papers.

Given that during this "free" republic press censorship was extremely heavy and any news had to get approval from the Secretary of State before publishing, surprisingly, so many many primary sources are available to examine.

Alison Plowden, who died on August 17 aged 75 said: "I am in the fortunate position of having been able to turn my hobby into a profession".There must be thousands of women doing unsatisfying jobs who have a private interest or talent which could be turned to full-time and financial advantage… I do wish more of them would have a go."

Posted by A Trumpet of Sedition at 03:33 No comments:

(This is a reply to my original post on Lawrence Stone’s The Cause of the English Revolution. I am not sure whether I am going to reply to it. Needless to say I do not agree with some his remarks although some clarification might be in order. I would welcome any other comments from my readers. Please do not be shy. All posts within reason will be published)

The publication of this work in 1972 offered sixth-form pupils and first-year undergraduates a useful overview of the origins and causes of the English Revolution from the other side of the Atlantic. Since his move to Princeton in 1963, Stone had become increasingly interested in the work of anthropologists and political scientists just as he had been in the 1940s in that of economic historians and in the light, that such work might throw on long-standing historical problems.

Whatever subscription he had once paid to the influence of Marx and Tawney had long since gone by the time in the late-1950s and early-1960s that he composed The Crisis of the Aristocracy, 1558-1641. Stone was certainly never a Marxist in the sense that Christopher Hill was. His early teaching at Princeton was, in any case, devoted, as the festschrift in his honour shows, to a survey course on the evolution of English society between c.1500 and c.1700. Stone certainly liked being at the centre of academic attention and of controversy, hence his production of works like this although it was also true to say that he had, by the early-1970s, become cut off from the main currents of academic research in England.

The origins of Hugh Trevor-Roper’s dislike of Stone did not lie in the latter storming out of a revision class at Christ Church College in Oxford. In fact, the quarrel over the gentry arose from Hugh Trevor-Roper lending his transcripts on aristocratic indebtedness from the Recognizances for Debt then held in the Public Record Office in Chancery Lane. Stone used this material without Trevor-Roper’s permission and with the most misleading of indications as to how he had acquired it in his 1948 article in The Economic History Review.

Furthermore, because he had not understood the technicalities of this source, Stone had assigned to the late-Tudor peers levels of debt twice their real size. Trevor-Roper was perfectly entitled to criticise Stone’s work and, indeed, that of Tawney whose stature as an historian was considerably higher in 1950 than that of Stone but whose analytical errors were, as J.P.Cooper shortly thereafter pointed out, even more serious

The controversy probably stimulated more interesting research into English history in the seventeenth-century than any before or possibly since. Hugh Trevor-Roper was a friend of Jack Hexter until the publication of Hexter’s essay, Storm over the Gentry, in Encounter in May, 1958. For several years thereafter, their friendship was in abeyance. Politically, they were very different indeed, as anyone who knew them both would understand. There is no significance in the funding of that magazine for their historiographical positions.

The problem with Stone’s 1972 work was not just its use of sociological jargon like ‘multiple dysfunction’, ‘preconditions’, ‘precipitants’ and ‘triggers’ but also its antiquated analytical framework, its assumption that very long-term factors were at work, that the loss of landed possessions by the Crown and Church and, as he erroneously believed, the peerage made Revolution inevitable as the apparatus of Stuart rule failed to cope with the rise of the gentry, the spread of Puritanism, and the decline in the prestige of the Crown and Court and the Laudian church. Stone held that the political and religious history of the pre-Civil War period had already been written by S.R.Gardiner and C.H.Firth and fundamentally needed no emendation. He was profoundly wrong as Nicholas Tyacke and others were already demonstrating.

Stone’s work on the origins and causes of the English Revolution was dated by the time it appeared in 1972. It belonged essentially to the 1950s and early-1960s. No amount of sociological dressing could make it fashionable again.

By then, Trevor-Roper had written and published his ground-breaking essay on the Union of the Crowns. It was to the hypotheses about the significance of ‘multiple kingdoms’ that the future in 1972 belonged.

Posted by A Trumpet of Sedition at 10:27 No comments: