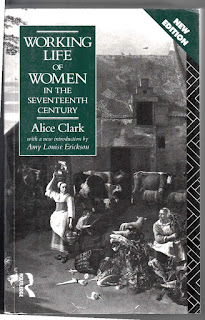 "A woman that to a whore-monger is wed is in a most desperate case: She scarce dares performe her duty in bed, with one of condition so base: For sometimes hee's bitten with Turnbull-street Fleas, The Pox, or some other infectious disease; And yet, to her perill, his mind she must please."[2]

Historians owe a tremendous debt to the Publisher Forgotten Books for digitally re-mastering this important book. The book forms a part of a classic reprint series which uses the latest technology to bring to life facsimiles of historically significant writings.
If ever a book qualified as a historically significant book, it is this one. I would go as far as to say that it should be on every university reading list covering the early modern period.

In an age when women's History writing is dominated by Gender studies, Clark's book is a great antidote to this form of historiography. A class-based analysis of working women in the 17th century is an anomaly. This was not the case when Clark wrote her book over 80 years ago.

It would not be an overstatement to label it "a classic work of women's history." It is a shame that she only wrote one book. While the book has a rigorous academic look to it, Clark was not an academic historian only started to take history seriously at the age of 38.

Clark is very sympathetic towards the working women she portrays. The book contains an underlying anti-capitalist sentiment. Born in 1874 Clark was certainly no Marxist but must have been influenced by the growth of Communist ideas towards the late 19th century and early 20th century and would have been radicalised by the crisis gripping world capitalism.

Clark had a very rudimentary understanding of the nature of capitalism, expressed by this quote  "Perhaps it is impossible to say what exactly constitutes a capitalist, and no attempt will be made to define the term, which is used here to include the aristocracy who had long been accustomed to the control of wealth, and also those families whose property had been newly acquired through trade or commerce. The second group conforms more nearly to the ideas generally understood by the term capitalist, but in English society, the two groups are closely related". (Chapter 2 page 14)

Clark's social and political makeup was heavily influenced by her family background as Michael Haynes points out "William Stephens Clark came from a strong Quaker family, and his connections helped him at a number of points in his career. In 1866 he married Helen Priestman Bright (1840–1927), the daughter of John Bright; they had two sons and four daughters, including Alice Clark (1874–1934), and Hilda Clark (1881–1955). His religious views led him to emphasise his direct social responsibilities to his workforce as an employer, and his indirect ones as a leading figure in the local community and county government. He encouraged homeownership among his workers and various local improvements including a library, and Crispin Hall for the local inhabitants to meet in. Such paternalism also had an economic benefit in a low-wage area where production was sometimes threatened by labour turnover and out-migration. However, he opposed trade union recognition for his workers during the period that he was in charge of the firm."[3]

Alice Clark's family was also closely linked to leading figures of the organised movement for women's rights in the 1860s, including her mother, and her great-aunts, Priscilla Bright McLaren, Margaret Tanner, and Mary and Anna Maria Priestman. According to  Sandra Stanley Holton ", she followed their example, working continuously on behalf of women's rights from early adulthood. From the 1890s she campaigned on behalf of women's suffrage as a member of the Women's Liberal Federation, helping form a branch in her locality. Temperance was another cause which she pursued during these years, alongside adult education".[4]

Howard continues "she spent much of her adult life (despite long periods of illness) working in the family factory, starting with an informal apprentice, to become a director in 1904. She was active in the suffrage cause, as a Liberal and on the Friends' Committee for the Relief of War Victims. She initially took up a studentship to research women's history in 1913 during one of her enforced breaks for illness and completed her research after the war."

Clark's link with the English revolution was direct as she came from a family of Quakers who at the beginning of the revolution part of its left wing. The Clark family were shoemakers and were the forebears of the modern-day shoe sellers dotted around major high streets. She held strongly feminist ideas. She was concerned about the effects industrialisation had on the women workers. Clark belongs to the school of historiography, which is broadly called 'economic history' now called social history.
While this term has been accepted and used by modern historians, this were not always the case. It would be correct to say that books examining women's role in history have not had a significant readership. The historian Keith Thomas who taught history at Oxford in the 1950s decided to set up a series of lectures on Women and the 17th century. Thomas's attempt was met with at best indifference and worst outright hostility.

After Working Life of Women was finished, she returned to the family business; she died in 1934. She began her book with a forceful rejection of any notion that women were "a static factor in social developments" and therefore unimportant in historical study.

On the contrary, according to the blog Early Modern Notes "they changed considerably over time with changing environments, and those changes require careful study because of the close bonds between women and men and women's (indirect) social and moral influence. She saw the seventeenth century as a period of profound change in English women's lives; not perhaps regarding most women's actual experiences of change so much as in underlying trends – the forces represented by 'capitalism".[5]

The Working Life of Women in the Seventeenth Century was published in 1919. The study was groundbreaking in many ways. The book underwent several reprintings. One writer said that the "study constitutes one of the most comprehensive surveys available on this topic."

The striking thing about the book is her great use of primary sources. Letters, diaries, wills, account books, magistrates' wage rate assessments, parish records, guild and municipal records, tax returns, workhouse records. In many ways, this type of historiography was the precursor to the school of "history from below," which mainly championed by the CPHG (Communist Party Historian group).

Her use of Quarter Sessions archives is one example of her use of primary sources to tell a story. The following quote from the book highlights the tremendous suffering by women of the lower orders. "The hardships suffered by the women of the wage-earning class proved fatal to their children. Gregory King estimated that there were on an average only 33 persons, including father and mother in a labourer's family though he gives 4.8 as the average number of children for each family in villages and hamlet. Another writer gives three persons as the average number for a labourer's family. The cases of disputed settlements which are brought before Quarter Sessions confirm the substantial truth of these estimates. It is remarkable that where the father is seldom living more than two or three children are mentioned, often only one though in cases of widows where the poverty is recent and caused as it were by the random effect of the husband's premature death, there are often five to ten children. In Nottingham, of seventeen families, who had recently come to the town and been taken, in as tenants, and which the Council wanted to eject for fear of overcrowding, only one had four children, one three, and the rest only two or one children apiece.'

"In fact, however significant the birth rate may have been, and this we have no means of ascertaining, few children in the wage-earning class were reared. Of those who reached maturity many were crippled in mind or body, forming a large class of unemployable's destined to be a burthen instead of strength to the community. This appalling loss and suffering were not due to the excessive work of married women but to their underfeeding and bad housing. Probably the women of the wage-earning class actually accomplished less work than the women of the husbandman class; but the latter worked under better conditions and were well nourished, with the result that their sons and daughters have been the backbone of the English nation".( Page 87 Chapter 3 Agriculture).

The main concentration of the book centers on how the early stages of capitalist development affected the lives of women in the 17th century. Clark examined differing strata of society. Of course, wealthy women were affected differently than female workers. Clark was enough of a historian to recognise this. She categorised three different layers of the population. Capitalists, which included aristocracy/gentry and a growing middle sort "ordinary people," small farmers, independent tradesmen/artisans and lastly "wage earners," trapped in poverty, a modest but growing group.

Howard is critical of her methodological study in "that her historical framework was unsatisfactory and too simplistic. Some developments she associated with the seventeenth century (such as the 'masculinisation' of professions like midwifery, and the removal of most production from the domestic environment) properly belong to the later 18th century or even later. She equated 'capitalism' with 'industrialism,' but the former undoubtedly preceded the latter by some centuries. Further, subsistence household economies were already extremely rare by the 17th century".

To conclude, Howard believes that Clark's had a "pessimistic view of modernisation" which to a certain extent she did but she is correct in her attack on the worst excesses of capitalism, her alternative was to mitigate the worst parts of capitalism.  The book is well worth reading and should be on any serious students reading list.