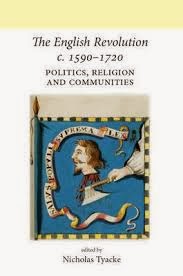 This collection of essays edited by Nicholas Tyacke are a bold attempt at placing the English revolution in the context of long term political and social changes in England that started in the late 1590s and went on well into the 1720s.

Most of the essays are concentrated on the crisis of transition by the English Revolution (1640–60).

It is a big ask to cover 120 years of very complex changes in England which saw the country transform from a relatively back wood feudal economy into the early beginnings of a capitalist country saw the execution of a king and the establishment of a republic.

The date span c.1590–1720 places the book in the context of a long seventeenth century'. From a historiographical standpoint this theoretically at least places this collection of essays firmly in the school of thought belonging several left-wing historians most famously Eric Hobsbawm. His seminal essay was the  Crisis of the Seventeenth Century published in Past and Present.

The term was coined by English Marxist historian Eric Hobsbawm in his pair of 1954 articles and complimented by his contemporary, Hugh Trevor-Roper, in a 1959 article entitled "The General Crisis of the Seventeenth-Century" published in the same journal. According to Wikipedia "Hobsbawm discussed an economic crisis in Europe; Trevor-Roper saw a wider crisis, a crisis in the relations between society and the State".

It would be wrong to think that this collection of present-day historians would like to return to more left-wing historiography. The book only pays lip service to some conceptions normally associated with the left historians, for example, the continued use of the phrase "English revolution". The book contains ten essays from a mostly post revisionist historiography. Some of these essays came from a 2004 colloquium on 'The English Revolution and its legacies'.

One aspect of this lip service to left-wing historiography is the adoption of the book of a premise that the origins of and to some extent the causes of the English revolution can be found in a long-term viewpoint.

In his introduction, Tyacke tries to reevaluate the revolutionary nature of the revolutionary events of 1640 to 1660. In doing so, he seeks to place this collection firmly in the camp of what has been labelled the 'post revisionist school of historiography.

It is hard to understand what audience this collection of historians is appealing to. Having said that Tyacke does provide a very good introduction to the subject. In his 'locating the 'English Revolution' his analysis of Whig and Marxist historiography does give the reader a good insight into two major interpretations of the English revolution. His analysis of the revisionist interpretation of this period is a little weak. Perhaps the reason being that Tyacke and most of the other historians in this collection are too close to revisionist positions.

As one reviewer put it "Few revisionists will be won over at this stage, but some may find themselves mobilizing in anticipation of a wider onslaught".[1]The book is not a point-scoring exercise against previous revisionist positions. There is a limited attempt to provide an alternative viewpoint of a very complex subject.

The book is broad in its scope. Some of the strongest chapters are ones that deal with the period 1640 to 1660. While purporting to be about moving on from revisionist historiography, the subjects chosen in this collection are all ones that most revisionist historians are comfortable with the exception being John Walters's essay.

Sean Kelsey's chapter is well-argued and well-researched on the King's Book. Eikon Basilike and the English Revolution of 1649 covers some ground that John Adamson has tread and will tread in his forthcoming book. Kelsey, without intention, highlights that despite what revisionists say there were class differences amongst even the Royalists. I hope Kelsey continues this work because a lot of this kind of research has been abandoned by revisionist historians.

This collection of essays sits very easily with the reader, and they do provide a wide-ranging analysis but whether they form a groundbreaking development of a post-revisionist agenda, I am not entirely sure.

Perhaps the two historians that are readily identifiable as 'post-revisionist' are Richard Cust and Ann Hughes, their previous work[2] has built up a body of historiography that has emphasized the ideological struggle that went on before, during and after the revolution.

The stand out essay is John Walter's Politicizing the popular? The 'tradition of riot' and popular political culture in the English Revolution. While holding some similar positions to several Marxist historians, his research into popular riots and disturbances upholds a tradition of "history from below" school of historiography. Walter does subscribe to the revolutionary nature of the period, and that that there was a clash of ideologies he does not subscribe to the belief that the lower sections of society were major players in the drama.

To conclude, this collection of essays sets itself very difficult tasks. I am not sure it completes those tasks. To be in favour of the conception of a long 17th century is a difficult enough, it is nearly impossible when most of the essay writers reject any Marxist conceptions that would have given the book a much better analysis. The fact that none of the essays tackles deep-seated changes in the English economy is a glaring absence. The growing distaste amongst revisionist and post revisionist historians for economic historiography is damaging and short-sighted. All in all, I would recommend the book for students of the subject and the general public. The book is well written and researched. Although a read around the subject is a must

Posted by A Trumpet of Sedition at 08:36