Writings of Exile in the English Revolution and Restoration: Philip Major, Ashgate March 2013 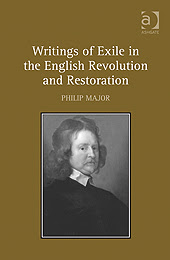 Phillip Major's new book is a welcome addition into areas of the English revolution that has been long neglected. Major's book on exile joins a recent number of books examining royalist exiles, including Geoffrey Smith's look into Royalist exiles during the Civil Wars and the Commonwealth, and by the same author The Cavaliers in Exile 1640–1660.

Major's research into royalist exile both internal and external has according to one writer "contributed much new and original research and written work on the subject exile". Major's work should be read alongside numerous other studies which in the last five years have filled a large number of gaps in royalist historiography.

Given the amount of material that remains to be archived and written about on the subject of exile Major's book is an important contribution to this research.  The book is both austere in look and content. One problem is Major's use of nearly impenetrable language that would put even the most enthusiastic reader off. I understand that these type of books must have a certain academic tone; there is a danger that this type of language becomes understandable available to a select few.

The writer George Orwell hated this type of unnecessary language writing "The inflated style itself is a kind of euphemism. A mass of Latin words falls upon the facts like soft snow, blurring the outline and covering up all the details. The great enemy of clear language is insincerity. When there is a gap between one's real and one's declared aims, one turns as it were instinctively to long words and exhausted idioms, like a cuttlefish spurting out ink. In our age, there is no such thing as "keeping out of politics." All issues are political issues, and politics itself is a mass of lies, evasions, folly, hatred, and schizophrenia. When the general atmosphere is bad, language must suffer. I should expect to find—this is a guess which I have not sufficient knowledge to verify—that the German, Russian and Italian languages have all deteriorated in the last ten or fifteen years, as a result of dictatorship.[1]

The date range covered by Writings of Exile 1640-1680 is broad and difficult and is probably why Gaby Mahlberg felt that the book was a little "disjointed".Major's approach was defended by the publishers saying "it challenges conventional paradigms which assume a neat demarcation of chronology, geography and allegiance in this seminal period of British and American history. Crossing disciplinary lines, it casts new light on how the ruptures -- and in some cases liberation -- of exile in these years both reflected and informed events in the public sphere".[2]

Major's writing style is not for the faint-hearted. The academic tone and language that permeates the entire book is set in Chapter One Edward Hyde: Case Study of a Royalist Exile. Hyde was a significant figure both during the revolution and the restoration of the monarchy. His History of the Rebellion, according to one writer "served to formulate and crystallize the social philosophy soon to be known as Toryism. As a historical rhetorician and portrait painter, there can be no doubt that Clarendon ranks among the greatest; the strength and resilience of the Tory view of history may be estimated from its present prevalence and influence".[3]

Hyde's exile begun on Isles of Scilly, Jersey and other places during the 1640s and 50s. His second exile was in Montpellier in the late 1660s and 70s. His fall from power would have had a deep psychological impact on him. However, Major's book does not examine how politically Hyde dealt with what was tantamount to a political exile. I am not sure the best way to understand Hyde's political exile is through his writings' Contemplation of the Psalms.

During his periods of exile, Hyde attempted to form a broad spectrum of political and religious alliances. While he would have experienced a great deal of personal, psychological and family problems due to exile, he did not go quietly into the good night.

In many instances, he sought to form a myriad of alliances in order to pursue his political and social agenda. As Mahlberg said, looking into his ties with republican and Leveller activists abroad would be a very good research topic. She adds "There are intriguing links between Clarendon and his protégé republican Henry Neville exiled to Italy in 1664 for their mutual benefit, for instance, while the firebrand Algernon Sidney made various overtures for office to the Restoration regime before plotting to topple it. Further leads worth exploring point to Catholic Rome, where both royalists and republicans had their secret networks, and towards the Huguenot south of France, wherein the later 1660s we find both the fallen first minister Hyde and the fallen republican Sidney."[4]

While Major is within his right to study and research what he wants. One should not draw from this study of Clarenden's lesser religious writings a belief that these should be elevated above his political or literary writings.

Many Royalist exiles sought to ransack the bible in order to understand what had happened to them. For many protestant Royalists "both the Established Church and its liturgy remained decidedly alive, if maimed and disoriented. Gathering in the private chapel of Sir Richard Browne, the royalist diplomat in Paris, and under the chaplaincy of John Cosin, dean of Peterborough, many Protestant royalists recast their newfound hardship in familiar religious terms. Whether forced into exile by parliamentary ordinance or voluntarily following the Stuarts in hopes of restoration, those who attended services at Browne's chapel turned to Scripture and divine example in order to comprehend defeat".[5]

In Chapter two 'Ceremony and Grief in the Royalist Exile' Major continues his theme of royalist exiles seeking to continue their religious practices into exile. The chapter explores royalists' attitude 'to the death of fellow exiles, as well as friends and family left behind in England'.

According to Major "there is considerable evidence, much of it again found in Evelyn's Diary, for the continued observance by royalist exiles of the full panoply of Church of England services, including those of Holy Communion, christening, marriage and even the ordination of priests and consecration of bishops. Yet while, while each of these ceremonies played an important role in engendering a sense of cultural continuity amidst the rupture of exile, the rites of burial provide a particularly poignant and recurring motif in the extant contemporary literature. Exile is an extreme environment in which people experience an acute sense of change and behave in revealing ways".[6]

Chapter 3 deals with 'Royalist Internal Exile'. Major's focus is on the exile of royalists from London and their internment in the countryside. These royalists built up a network of friends who shared political and religious beliefs. The chapter is an elongated paper which appeared in the Review of English Studies. It is pretty clear from Major's work on the subject of internal exile that the subject has been heavily under-researched.  Parliament during the civil war, according to Major, developed a large number of measures to ensure large scale royalist exile.[7]

Again royalists refused to go quietly into internal exile. Many royalists responded by launching a barrage of poetry in order to understand their predicament. In (John) Berkenhead's poem, 'Staying in London', Major states, "provides a window into the royalist literary response to banishment from London, and also allows us to explore its nuanced relationship with other cavalier verse of defeat and exile. Communicating hope and fear, secrecy and indecision, and the sometimes surprising level of enervation which these combinations can generate, it also incorporates more unambiguous royalist literary notions, such as imprisonment, though even these are by no means always treated similarly.

Perhaps most singularly, the peculiar nature of exclusion from London during the English Revolution, with its concomitant anonymity and reduction in status, seems to turn the cavalier poet in on himself, to the brink of self-loathing, until, ironically, he eventually longs to leave the capitalç‘O tear me hence' çof his own volition. On this evidence, like their external equivalents, measures of internal exile such as the Act for Banishment have not only far-reaching physical but also psychological, repercussions, not least for those who attempt to defy them".

Chapter four 'William Goffe in New England' discusses the regicides exile in America. As Gaby Mahlberg mentioned in her review three royalist chapters to one parliamentary is a little one-sided. You get the feeling that if the other way around the author would be accused of undue bias. I find this chapter the best. In the sense that Major writes in a manner that is easier to understand without dumbing down history. Goffe was a significant figure in the English revolution, and Major does give him the respect due. As Major points out, there is a significant difference between royalist and parliament exiles in so much that many of the parliamentary exiles were regicides and were hunted down without mercy.[8]

Like Hyde in chapter one, Major tries to find similarities between Goffe's and Hyde's use of the Psalms and other Biblical texts in their exile writings. Like Hyde, earlier in the book Goffe spent large parts of his exile wondering how he lost power so quickly and very rapidly become exiled in a strange land. Major concentrates heavily on exiles turning to religious literature, but research can only take us so far. Republican revolutionaries like Goffe had no means of learning from past revolutionary struggles, so they turned to the bible. Historians should not limit their research to a man's religious proclivities.

To conclude, as was said earlier, this book is not for the faint-hearted. The book is part of a broad shift in the historiography of the English revolution. The last twenty or so years have seen a major shift away from the dominant Marxist historiography. One of the byproducts of this shift is over the last five years we have witnessed a proliferation of Royalist studies. Major's new book enters into this territory. Despite being well written and researched his use of language, which is largely impenetrable to the wider reading public could lead to this type of historiography being open to a select few.

Posted by A Trumpet of Sedition at 11:44