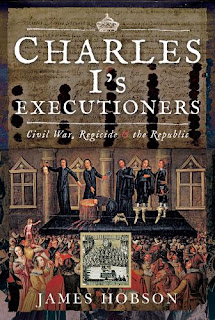 January 1649, a unique event in English history. For the first time, a king was killed by his people after a bloody revolution. As one reviewer of the book puts it, "a once-unfathomable act" was taken.

Hobson's book is an excellent and well put together account of this bloody deed. The book contains new research. While aimed at the educated general reader, it retains a good academic standard.James Hobson's new book is an important addition to our understanding of the motives and political positions that led to Charles Ist's regicide. The book is extremely well researched, and it is clear that Hobson has deep mined a few archives. He has brought to the wider public several English revolutionaries that historians have long forgotten. As Hobson states when he "pitched the book to his publishers, he stated that no one had produced a 59 person history of the regicides". So in that sense, it is groundbreaking work.

Another first was a historian who explained how he wrote the book and the pratfalls he encountered, which Hobson did in a blog post. Explaining that Chapter 1 "The plan was to get those who died early out of the way. But this was also an introduction, and it soon became obvious that each of these men represented a different 'aspect' of the regicide. Alured was the three-generation puritan, and I put him first because he also had most of the other qualities of the regicides. Moore as the Northern hater of Catholics; Blakiston as the anti-Bishop figure; Temple as the early military fighter for Protestantism and Pelham as the local military commander and run-of-the-mill MP. Temple was my first compromise; he did not die early but seemed to do nothing after 1650. Another early death was John Venn, a famous iconoclast in an age that was already infamous for such behaviour. However, when I researched him, he struck me far too important to go in this chapter. I debated which I wanted more; a 100% all-around watertight introduction OR Venn in the correct place".

Probably the most important regicide after Oliver Cromwell was Henry Ireton. Hobson does him justice. Hobson correctly states that Ireton was the motor force behind the regicide. Also, the restoration of Thomas Pride to his rightful place in history was long overdue. Hobson rescues a large number of regicides from the condescension of history. The book shows the varied political, economical and social makeup of the regicides. Some were lawyers, soldiers, puritans and republicans. All came from lower-middle-class or gentry backgrounds.

As Hobson shows in the book, revolution does strange things to men. Firstly it was an enormously brave thing to do, and many of the regicides would have known that if the revolution failed, it would mean their lives would have ended. Hobson recounts that even leading members of the revolution, from Thomas Fairfax to Leveller leader John Lilburne did not sign the death warrant.

None of the regicides would have believed that at the start of their revolution that at its end, they would kill a king after a long and bloody revolution. To their credit, many, even after the demise of the revolution, still held that their actions were right and did not retract their beliefs despite Charles II bloody reprisals. Nine regicides were subject to treason's full penalties, being hung, drawn and quartered., two died in custody before being executed. Despite knowing that the killing of a king would have a serious impact on their lives, they held onto their belief in the revolution's correctness.

The book has a couple of major weaknesses. The first being Hobson's failure to examine recent historiography on the regicide. Nothing is made of the recent historian's debate. Hobson says nothing of the debate between Sean Kelsey and Clive Holmes[1]. Hobson also could have commented on several recent books examining the regicide and the fate of its participants[2].

The second is a bit more serious. To Hobson's credit, he rejects current revisionist historiography and believes that a revolution took place. Despite a cursory look at many of the regicides' economic background, most came from the gentry, with some being merchants engaged in transatlantic trade. Hobson fails to put the regicides in a more objective context. This is a major flaw in the book after all, as Karl Marx so brilliantly said, "Hegel remarks somewhere that all great world-historic facts and personages appear, so to speak, twice. He forgot to add: the first time as tragedy, the second time as farce. Caussidière for Danton, Louis Blanc for Robespierre, the Montagne of 1848 to 1851[66] for the Montagne of 1793 to 1795, the nephew for the uncle. And the same caricature occurs in the circumstances of the second edition of the Eighteenth Brumaire. Men make their own history, but they do not make it as they please; they do not make it under self-selected circumstances, but under circumstances existing already, given and transmitted from the past. The tradition of all dead generations weighs like a nightmare on the brains of the living. And just as they seem to be occupied with revolutionizing themselves and things, creating something that did not exist before, precisely in such epochs of revolutionary crisis, they anxiously conjure up the spirits of the past to their service, borrowing from them names, battle slogans, and costumes in order to present this new scene in world history in time-honoured disguise and borrowed language. Thus Luther put on the mask of the Apostle Paul, the Revolution of 1789-1814 draped itself alternately in the guise of the Roman Republic and the Roman Empire, and the Revolution of 1848 knew nothing better to do than to parody, now 1789, now the revolutionary tradition of 1793-95. In like manner, the beginner who has learned a new language always translates it back into his mother tongue, but he assimilates the spirit of the new language and expresses himself freely in it only when he moves in it without recalling the old and when he forgets his native tongue".

To conclude, I would recommend this book. It deserves to be on every reading list at major universities and deserves a wide read. Hobson is to be congratulated for the work he has done on these important revolutionaries. His book will be a basic textbook to aid future study.

Author James Hobson has written such works as ''Dark Days of Georgian Britain', 'Following in the Footsteps of Oliver Cromwell'. and 'The English Civil War Fact and Fiction'. Hobson has a website @ https://about1816.wordpress.com/

Posted by A Trumpet of Sedition at 01:58

For the last three months, I have been transferring all my article from this blog to a new website on WordPress. It can be found at atrumpetofsedition.org. I will still post here for the time being, but the future will reside on the WordPress website.

This new website is the product of years of hard graft. It replaces the blog that I started thirteen years ago when I finished my part-time degree at Birkbeck University in 2003.

This website is dedicated to the historian Barry Coward who first piqued my interest in the English Revolution. The blog’s name comes from the book called  A Trumpet of Sedition: Political Theory and the Rise of Capitalism, 1509-1688 (Socialist History of Britain) by Ellen Meiksins-Wood- Neal Wood given to me by my friend Tony Hyland.

Posted by A Trumpet of Sedition at 10:48