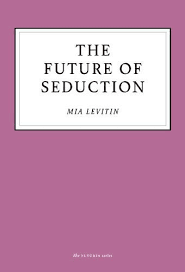 Mia's book is an attempt to restore the art of seduction to its rightful place in society. If one person has a chance of success, it is she. Mia is well qualified to talk on the subject. Levitin is classically beautiful, highly intelligent and has a PhD in the art of seduction, a dangerous combination in a woman. Good luck to the man that tries to chat her up. One piece of advice is to look up what a siren is.

Much of the early part of the book is based on Mia's early life. Married at a very tender age and then divorced very soon after would scar many women for life. But not her. Even from the brief period, I have known her; she exhibits an almost defiant spirit and independence of mind that is very attractive in a woman.

She writes "When my marriage ended, I figured I had chosen the wrong partner but did not question for a second that a relationship was a prerequisite to happiness. Hell-bent on hunting down Mr Right 2.0, I embarked on dating armed with an Excel spreadsheet and a love-coach-to-the-stars. Despite my can-do attitude, it has not happened yet. If you had told me then that I would still be single after111 first dates over about five years, I would have found it unfathomable. But truth be told, I am grateful for the time alone". The faster you let go of seeing yourself as a victim, the better off you will be – no matter how appalling the behaviour of an ex. Own a part of what went wrong, even if that part is just a sliver.

When I first started dating, I got bored after ten dates to go through 111; you have to admire that dedication. Going through 111 dates without any feelings of romantic love is a little strange. What is also strange is the fact that the word love is hardly mentioned in the book. As Woody Allen might have said seduction without love is pretty meaningless.

The book is extremely well written. Levitin has a surgical writing style, clear and to the point without using unnecessary words to make her point. She has a touch of the George Orwell about her.

While it is a pleasure to read her the subjective matter in the book makes for depressing reading. The book is humorous in places which is down to Mia what she discusses is far from funny.

It is clear that social and sexual relations are becoming increasingly difficult, and the widespread misuse of technology is affecting intimacy. If human relationships continue the way they are going, humanity will be in Mia's words "screwed".

Mankind's and womankind's struggle to screw is as old as time. Procreation is a social and necessary part of the human race. Having sex is a natural occurrence. Mia believes that the reckless pursuit of this physical activity has been detrimental to men's/women intellectual development. As one writer puts it "the tools we use to meet, mate and relate have evolved more in the past ten years than in the previous ten thousand, yet we arrive at them with biology unchanged since the Stone Age". In some people intellectually unchanged since the stone age.

While men and women are seeking to satisfy their sexual urges through the internet, Levitin believes that this is disconnected from our intellectual development. The brain is the most important sex toy. 'Imagination is the best pornography we have,' says Kate Moyle.

Many peoples sex lives are divorced from reality. Sex does not take place in a vacuum. We live in a society that treats women purely as sex objects, explaining the rise in sexual assaults on women.

As David Walsh points out "On the basis of generally unsubstantiated claims, careers and lives were destroyed. The New York Times, Washington Post and the New Yorker and New York magazines regularly and gleefully participated in the evisceration of various personalities based on shabby evidence, or no evidence at all.[1]

The great philosopher Hegel once said "The rational is real, and the real is rational, I believe that Levitin's book is largely written in this spirit. The book deserves to be widely read. Whether it rescues the art of seduction from the condescension of history is another matter.

Mia Levitin is a cultural and literary critic based in London. Her work appears regularly in publications including the Financial Times, The Spectator and the Times Literary Supplement. She can be found @mialevitin.com

Posted by A Trumpet of Sedition at 03:51