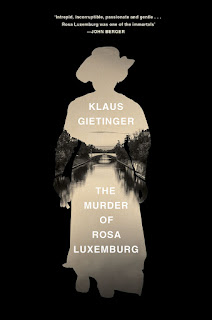 “Here is a world in disorder, Who is then ready to put it in order?” Bertolt Brecht -1926

“Lenin and Trotsky and their friends were the first, those who went ahead as an example to the proletariat of the world; they are still the only ones up to now who can cry with Hütten, ‘I have dared!” Rosa Luxemburg

Although the Eagles do swoop down and beneath the Chickens fly, chickens with outspread wings never will soar amid clouds in the sky. Lenin on Rosa Luxemburg

The Marxist Revolutionary Rosa Luxemburg was executed 100 years ago this month. She was born in Poland in 1871; she was a world-renowned Marxist, economist and anti-war activist. In the introduction to his excellent book, Klaus Gietinger makes the following point “The cold-blooded murder of revolutionary icons Rosa Luxemburg and Karl Liebknecht in the pitched political battles of post-WWI Germany marks one of the greatest tragedies of the 20th century”.

The assassination is also one of the greatest crimes of the 20th century. In Berlin on 15 January 1919, Freikorps soldiers of the Garde-Kavallerie-Schützen Division put Rosa Luxemburg and Karl Liebknecht under arrest. The two were leaders of newly formed German Communist Party (KPD). They were arrested by Freikorp soldiers and taken to the Hotel Eden, where they were tortured and later murdered.

As the Marxist writer, Peter Schwarz describes “The 48-year-old Rosa Luxemburg was among the most outstanding Marxist revolutionaries of her epoch. She gained notoriety for her sharp polemics against Eduard Bernstein’s revisionism and the Social Democrats’ pro-war policies in the First World War, and was the undisputed theoretical leader of the SPD’s revolutionary wing and later of the Spartacus League”.[1]

Gittinger's investigation was written primarily in order to commemorate the 100th anniversary of their untimely deaths. Gietinger who is not a professional historian has done an excellent job reconstructing the events on that fateful night.

His deep mining of the archives in Germany is an essential first step in identifying who exactly was responsible for the murder, and what forces in the SPD covered for the murderers and allowed them to not only escape, but also to ease back into a comfortable life back into Germany society and in some cases back into politics. Many involved in the murder went on to have careers as Nazis.

One of the strengths of Gietinger’s book is his ability to understand the tragedy of Luxemburg’s death along with the farcical nature of the investigation and subsequent trials.

On the negative side, Gietinger has a limited political understanding of the events that brought about the deaths of Luxemburg and Karl Liebknect. He has a confused understanding of the political situation when asked in an interview why he said that the murders were  “one of the greatest political tragedies” of the 20th century.

His answer was “Luxemburg and Liebknecht were mythical leader figures of the authentic left. The SPD top brass had long moved to the right through their pact with the old powers and armed forces, but many SPD supporters venerated the two Spartacus leaders. They would never have permitted the Stalinization of the KPD. Luxemburg was against joining the Comintern; she criticised Lenin and Radek’s terror. Even Liebknecht would have been reluctant to accept a mere vanguard of the working class.

Both tried to help the masses come into their own and did not seek to patronise them. The left in Germany and Europe would have pursued a more independent path. There would have been a chance to expose the right-wing leaders of the SPD. The division in the left would not have been cemented. Whether that would have prevented fascism and Stalinism is another question, but the chances of doing so would have been higher”.[2]

A more precise appreciation was given by Leon Trotsky who summed up situation in this concise manner “As to the German Revolution of 1918, it was no democratic completion of the bourgeois revolution, it was a proletarian revolution decapitated by the Social Democrats; more correctly, it was a bourgeois counter-revolution, which was compelled to preserve pseudo-democratic forms after its victory over the proletariat.”[3]

To his credit, Gietinger understood that the SPD murdered them in order to head off the impending social revolution. Gietinger deserves much credit for bothering to uncover the murder of Rosa Luxemburg. It is still hard to believe that the full truth has not fully come out until now.
As Gietinger graphically portrays in the book the vulnerable Rosa Luxemburg was smashed in the head with the butt of a rifle in the Hotel Eden foyer. A car was then brought to the hotel she was murdered in the car and her body thrown in the nearby Landwehr Canal. Her body was only discovered by accident a month later. To cover the murder up the perpetrators lied by saying that Luxemburg was lynched by an outraged mob.

As Peter Swartz explains “The brutal murder of Luxemburg and Liebknecht marked a new stage of counter-revolutionary violence. Before this, the bourgeois state had ruthlessly cracked down on socialist opponents, and, as in the aftermath of the suppression of the Paris Commune in 1871 in France, took bloody revenge against revolutionary workers with mass executions. However, the murder of the leaders of a revolutionary party by state organs without a trial or court judgment was a new phenomenon and set a precedent followed by others. Even the autocratic Tsarist regime generally banished socialist opponents to Siberia”.

In the latter part of the book, Gietinger explains how the leadership of the SPD systematically protected the killers. The trials of the killers even by bourgeois standards were farces. As the review in the Guardian by Lara Feigel points out “There was a series of trials in which the SPD leaders colluded with the killers, appointing their collaborators as judges. In May 1919, the court decided that Runge had attempted to kill Luxemburg and Vogel had shot her, but only gave them two-year sentences as they could not know who had caused the death. When Vogel escaped to the Netherlands, the authorities failed to extradite him, frightened he would expose the identity of his accomplices. Shockingly, even in 1960s West Germany when Pabst revealed that he had ordered the killing, the government issued a communique labelling the double homicide a “legitimate execution”. At this point, Pabst outed Souchon as the killer, but Souchon took the audacious step of suing for libel. The court assigned to judge the case relied on the wholly inaccurate records from the 1919 trial, so he won. This book, therefore, provides an important coda to these years in proving, with the aid of diagrams and documents, that Souchon was the culprit”.[4]

While Gietinger is clear on the role of the SPD in covering for the SPD, he says little about why the SPD played such a prominent role in the murder of two ex-members. The leaders of the SPD especially Gustav Noske, the minister responsible for the Reichswehr and a leading SPD member, gave the green light to the Garde-Kavallerie-Schützen Division. This was an organisation that was renowned for its ruthless violence against the German working class. When the first court case against the murders took place, their acquittal was personally signed by Noske.

It is not surprising given the political nature of the SPD today that it still denies its responsibility for the murder of Luxemburg and Liebknect.

As Gietinger explains in his book one of the killers, Pabst spoke with Noske by telephone immediately before the killings. In a 1969 letter found after his death, he wrote “It is obvious that there was no way I could have carried out the action without Noske’s support—with Ebert in the background—and that I had to protect my officers. However, very few people have understood why I was never called to testify or charged with an offence. As a cavalier, I acknowledged the SPD’s behaviour at the time by keeping my mouth shut for fifty years about our cooperation”.

Given that they were heavily involved in the unprecedented state-sanctioned murder of Luxemburg you would have thought that the present day leadership would show a little contrition. This is not the case In a chilling statement of intent Wolfgang Thierse, former president of the federal parliament, declared: “We would do it again”.

According to Schwarz  “Had Luxemburg and Liebknecht survived in 1919, not only German history, but also world history would have turned out differently. A victorious socialist revolution in Germany would have freed the Soviet Union from its isolation and thereby removed the most critical factor for the growth of the bureaucracy and the rise of Stalin”. Perhaps Gittinger's next book will examine this prediction.

[1]  One hundred years since the murder of Rosa Luxemburg and Karl Liebknecht   https://www.wsws.org/en/articles/2019/01/15/pers-j15.html
[2] https://www.versobooks.com/blogs/4195-the-real-enemy-of-the-masses-is-in-our-own-basement
[3] https://www.marxists.org/archive/trotsky/1931/tpr/prre.htm
[4] https://www.theguardian.com/books/2019/jan/09/the-murder-of-rosa-luxemburg-by-klaus-gietinger-review
Posted by A Trumpet of Sedition at 06:13