Kishlansky on The Rise of the New Model Army

I have seen your comments on Kishlansky's book on your blog, A Trumpet of Sedition. This work is identical to his doctoral thesis supervised by David Underdown, a copy of which is in my possession. The text was not rushed into print prematurely.

Its central argument about the post-1646 politicisation of the New Model Army depends on his claim that, prior to that date, the armies of the Long Parliament lacked political interests of their own but this is clearly mistaken as any study, for example, of the 3rd Earl of Essex's army after the autumn of 1642 or of that of Sir William Waller or of the 2nd Earl of Manchester shows. Each of these armies had its own allies and advocates at Westminster and followers or supporters in the capital and relevant counties.

Kishlansky failed to recognise the implications of the works of Hexter and of Valerie Pearl in this respect. Nor should it be taken that the Levellers alone were significant in forming the political and religious attitudes of the New Model Army: the proposals debated at Putney were, as Philip Baker and Elliot Vernon showed, formulated by Henry Marten and his radical London allies rather than by the Levellers.

In any case, by the time Kishlansky's work was written, his argument hardly fitted into the pejoratively-termed 'Revisionist' project of Conrad Russell and his allies: that project focused on overthrowing the Whig-Marxist synthesis embraced by Hill, Stone, Manning and others. Its dominance was, however, mythical since it had already been challenged by figures like Hexter and John Ball in the 1950s.

In Christopher Hill's case, his influence waned rapidly after c.1972 when his model of analysis came under sustained challenge. Kishlansky's thesis and book were incidental to this process rather than central to it. Peter Lake described Kishlansky in September, 2015 as a "contrarian", someone who liked turning old notions upside down. You can see what he means from Kishlansky's study of Parliamentary elections in early modern England or from his last short book on Charles I.

It was this aspect of his approach that appealed to Russell and Morrill. Revisionism itself was, in any event, spent by c.1990 and has long since passed into the pages of secondary works just like the Marxism of Hill and his CPGB colleagues.
Christopher
Posted by A Trumpet of Sedition at 10:44 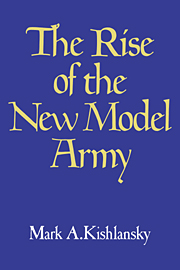 They lived, they suffered, they died. Thomas Hardy

It is Kishlanksy’s contention in the run up to the formation of the New Model Army to be more precise the years 1643–6, Parliament far from being in conflict operated as “model of consensus”.

So, for him, the New Model Army was not a direct result of Cromwell’s attempt to prosecute a far more aggressive and radical war against the King, and by radical I mean Leveller influenced. For Kishlansky radicalism hardly existed and the army was a by product of Consensus and compromise.

It was only after this consensus broke down did the army develop a political voice and become radicalised. The historian Ivan Roots is critical of Kishlansky’s attitude towards the army when he wrote “The New Model Army, 'departing little from the armies it replaced', is seen as a child of compromise. Not until the spectre of defeat was lifted in 1646 did 'adversary politics' seriously disturb Westminster internally, encouraging outside pressures. Factious now, Parliament failed to comprehend genuine professional grievances – arrears of pay and whatever – and by denying the right to petition politicised the Army, equating national liberties with soldiers' rights, making it seem more radical than it really was. (To all this the Levellers were irrelevant.) Stung in its honour the Army, reluctant but in good order, entered London in August 1647 to restore 'a free and lawful parliament' against internal and external 'faction and interest'. At this point, the story breaks off – on the brink of a revolution as yet undefined”.[1]

Kishlansky in the book discounts the belief that the army had a relatively worked out perspective and was beginning to act as a political force. He believed that  “From disparate and inchoate ideas the army formed its self –justification, and the process by which this happened, as do so many others of similar circumstances, remain mysterious”. The dictionary definition of inchoate used for our purpose is: not organised; lacking order, this is not correct.

It is clear the army had some form of collective ideology. The actions it took before and after Putney proved this. This is perhaps why Kishlansky stops short of discussing the Putney debates in his book.The Levellers persistent agitation had turned the New Model Army into a potent military and political force that had to be recognised.

Kishlansky attacks the concept that it is possible to draw wider political conclusions from the debate that took place in the New Model Army. He believed that Ideology inside the army had been exaggerated and misconceived.

He writes  ‘Much has been written about the ideology of the army, but most of it misconceived. A principle reason for this has been historians have assumed that the lowly social origins of many of the officers created a commitment to radical ideology. This is false on both factual and logical grounds. There were men of low birth among the new Model’s officers, and much has been made of Pride the drayman and Hewson the cobbler more still might be made of obscure officers like Spongers and Creamer whose surnames suggest backgrounds in trades and service. The army also contained a Cecil, a Sheffield, and three colonels who were knights. A careful study of the armies social origin, which lends support to the view that they were more traditional in nature (of solid status in rural and urban structures) still does not meet the real objections to existing interpretation- the fallacy of social determinism’.[2]

If we were to accept Kishlanskys assertion that “From 1645 to March 1647 there is almost no evidence of political activity within the New Model Army: for fifteen months the soldiers fought; for eight they waited”.

What is his point? Ideas do take the time to develop, and they do change under the pressure of political and economic changes. There is not a mechanical relationship between economic changes, and their political expression there is a dialectical one.

Kishlansky’s hostility to Marxist historiography is well known and runs through all of his work. He does not believe that class has any bearing on how a person thinks or behaves and rejects ‘the conception that social being determines social consciousnesses. A by-product of this intellectual myopia has led him to downplay the amount of radical literature available to the army. Kishlansky calls for a complete rethink on what ideas did motivate individual soldiers.

The book was well received by some high profile historians. Bernard Norling comments which have been echoed by many other reviewers said “ A more fitting title would be "The Efforts of the House of Commons to Govern England, 1640-1647[3]”.

Some commentators have picked up on that Kishlansky stops short of discussing the Putney Debates of 1647. It would appear that he is looking to fit his ideological positions into a highly particular time frame something he has accused other historians particularly  Christopher Hill of doing.

Kishlansky walks a tightrope with this book. It is not easy to combine one's ideological convictions and still produce an objectively written book. Very few historians have managed it. Kishlansky has a habit in this book of letting his conservatism get the better of him.

Christopher Hill and the CPHG

Kishlansky defends his positions like an animal protects her offspring. He has a no holes barred approach to historical work. This approach has led him into many scrapes. He seems to have reserved most his ire for the historians who came out of the Communist Party of Britain. Despite the Stalinisation of the Party, these historians produced a level of work that has not been surpassed.

Despite launching many unprovoked and in some cases disrespectful attacks especially on Christopher Hill, it must be said that the CPHG returned very little fire. Hill’s conception of the revolution and the New Model Army are well known and do not need to repeating here suffice to say as Ann Talbot writes Hill “recognised that revolutions are made by the mass of the population and that for a revolution to take place the consciousness of that mass of people must change since revolutions are not made by a few people at the top although the character of their leadership is crucial at certain points. These achievements were considerable at the time and are of continuing relevance today when historians increasingly reject any serious economic or social analysis and argue that revolutions are nothing but the work of a tiny group of conspirators".[4]

Kishlansky accused Hill of being “ immune to criticism”. An attack that was answered by Alex Calinicos “Well, if the criticism Hill’s work has encountered were all of the quality of Kishlansky’s shabby attack who could blame him for ignoring it? The insinuation that refusing to follow the tide of historiographic fashion is morally equivalent to sending dissidents off to the Gulag Archipelago is typical of a critique which proceeds by insult and innuendo rather than by anything resembling a careful argument.[5]

This book is not without merit, and Kishlansky is a capable writer. It has been pointed out that the book seems to have been hurried and that many mistakes occurred that should not have given the quality of the publishers.

The discounting of sources such as Edward Hyde, Earl of Clarendon, Edmund Ludlow, Bulstrode Whitelocke, and Richard Baxter on account of bias and their supposed unreliability is bizarre, to say the least.

As one writer said, “This strategy enabled Kishlansky to conclude that Cromwell’s New Model Army, far from being the mainspring of revolution, was the product of a politics of consensus and, in its early years, at any rate, lacked any radical consciousness. In the 1980s, the age of Margaret Thatcher, the Levellers, Diggers, and other radical groups, whose seemingly modern doctrines had so fascinated an earlier generation, were consigned to the historiographical sidelines”.

The Rise of the New Model Army book was the by-product of the revisionist domination during the last three decades of English Revolution historiography, and the reader should be aware of that. The American historian Mark Kishlansky embraced the revisionist doctrine fully. While recommending the book the reader should be aware of the Historians politics.