Woody Guthrie—People Are the Song, at Morgan Library and Museum in New York-Fred Mazelis

The career and legacy of folksinger Woody Guthrie (1912-1967) are the subject of a significant exhibition at New York City’s Morgan Library, on view through May 22.

As the exhibition notes, Guthrie was one of the most influential songwriters and recording artists in American history. His active career lasted barely 15 years, before he fell victim to Huntington’s Disease, the inherited neurological disorder that had killed his mother and would eventually claim several of his own children. In that time, however, Guthrie had an impact that has lasted for the next three-quarters of a century. He was a seminal influence in the Folk Music Revival of the 1960s. Both Pete Seeger, his near-contemporary, as well as Bob Dylan, from the next generation, took much of their inspiration from the songs of Woody Guthrie. 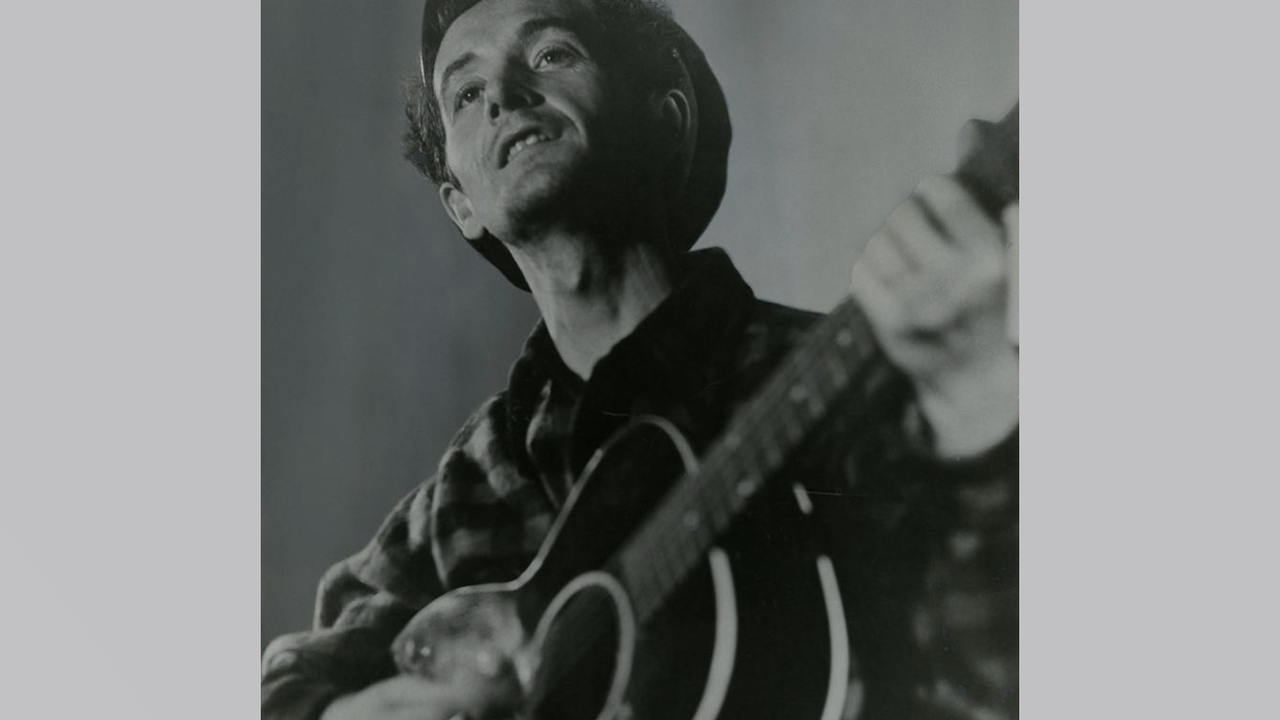 Woody Guthrie—People Are the Song

The show at the Morgan is jointly presented by the Woody Guthrie Center in Tulsa, Oklahoma, the museum that opened nine years ago in the state of Guthrie’s birth, and by Woody Guthrie Publications, whose president is Nora Guthrie, the singer’s daughter. The exhibition brings together a variety of materials, including audio and video excerpts, original handwritten lyrics, photos and other memorabilia on Guthrie’s life.

The World Socialist Web Site has written in some detail on Guthrie’s career and his musical legacy. While the Morgan exhibition does not add appreciably to the knowledge of his work, it effectively presents the major stages of his life and the elements of his career. The audio accompanying the exhibits is narrated by folksinger Steve Earle and includes many interview excerpts with Guthrie himself. As the show makes clear, while Guthrie is best known for his songs, that did not exhaust his creativity, which also included the production of cartoons, watercolors and oil paintings, along with poetry and other writings.

Sections of the exhibition are devoted to Guthrie’s early life in Oklahoma, the impact of the Depression of the 1930s, and the devastating Dust Bowl, which saw several million forced to leave their homes in the Plains States. About 200,000, including Guthrie himself, settled in California during the years of the Depression.

Guthrie was in his mid-20s when he began writing songs and achieved fame on a Los Angeles radio station. The exhibition gives a truthful account of Woody Sez, an illustrated column Guthrie wrote for the Communist Party’s West Coast People’s World newspaper for about 18 months, beginning in May 1939. The column was also run by the Stalinist Daily Worker, headquartered in New York City, and Guthrie was well known in CP circles by the time he moved to New York in early 1940.

One part of the exhibition presents audio of 15 of Guthrie’s most famous songs, including “This Land is Your Land,” “So Long, It’s Been Good to Know You,” “Pastures of Plenty,” “Union Maid,” “Hard Travelin’” and others, in jukebox format.

Most famous among these is undoubtedly “This Land Is Your Land,” which gets its own separate treatment in the exhibition. Written more than 80 years ago, it has been passed down through three or four generations since early 1940, and is known by tens of millions, many of whom would not recognize the name of its author. It is only one of more than three thousand Guthrie compositions, and is by no means the only one for which he is remembered. The song embodies many of the themes associated with Guthrie, however: an optimism and belief in the decency of the common man; a love of country which had nothing to do with nationalism and chauvinism; and outrage at racism and all other attempts to divide working people, and at the greed of the super-rich and the injustices perpetrated by the capitalist system.

As the show explains, the inspiration for “This Land Is Your Land” came from Guthrie’s angry reaction to Irving Berlin’s “God Bless America,” which was then saturating radio and spreading a message of conservative patriotism and complacency in the face of continued poverty, inequality and looming US participation in the Second World War. Guthrie wanted a song that celebrated the real promise of the US—an America of equality, as exemplified by his refrain, “This land was made for you and me.”

At the same time, Guthrie’s radicalism never went beyond left-wing populism. He never grappled with questions of socialist theory, the need to build an independent party of the working class, or the reasons for the tragic degeneration of the Russian Revolution. While he never joined the Communist Party, it was not because he critically examined and rejected its role as the defender of the privileged Stalinist bureaucracy in the Soviet Union, and its role in that capacity as the fanatical supporter of the administration of Democrat Franklin D. Roosevelt. This was the period of the Popular Front, the doctrine that guided Stalinist policy from the mid-1930s, except for the two years after Stalin signed his notorious pact with Hitler in August 1939. Guthrie continued to take his cue politically from the Stalinists, giving his full uncritical support during the war to the “democratic” Allies against the barbarism of the fascists.

The exhibition says little or nothing about the anti-communist Cold War that followed the victory over Germany and Japan in 1945. It is true that Guthrie himself was less affected than blacklist victims like Seeger, who saw his career virtually destroyed for a decade or more. Guthrie, showing unmistakable and advancing symptoms of Huntington’s Disease by 1952, was not a priority for the witchhunters, including the FBI of J. Edgar Hoover. One section of the exhibition refers to “the Peekskill Race Riots.” This is a somewhat misleading reference to the violent attack on a concert by African-American singer Paul Robeson in Peekskill, New York in 1949. Although there was a good dose of racism involved, Robeson was targeted because of his sympathy for the Communist Party and the Soviet Union. Despite his own political disorientation and miseducation at the hands of Stalinism, Robeson correctly refused to line up behind the war drive against the USSR, and for this, at the age of 50, he sacrificed the rest of his singing career.

The anti-communist hysteria on display in Peekskill was to lead less than a year later to war in Korea, and three years after that to the execution of Julius and Ethel Rosenberg on frame-up charges of having conspired to give Moscow the “secret” of the atom bomb.

The very limited attention in the exhibition to this part of postwar history, and its impact on performers like Guthrie and Seeger, is perhaps bound up with a renewed push in middle class and “left” circles, and in the leadership of the Democratic Party itself, for a kind of 21st century Popular Front. This is demonstrated at the very end of the exhibition, with a video screen presenting the musical contribution of Bruce Springsteen and Pete Seeger at the 2009 inauguration of Barack Obama. The implication is that, had Woody Guthrie been alive at the time, he would have joined in serenading Obama.

Although it can’t be stated with certainty, that would not have contradicted the politics of Woody Guthrie. Once again, the very real threat of fascism is being cited today as a reason to politically support “liberal” capitalist politicians—whereas in fact it is the so-called liberals and the profit system they defend that is breeding and strengthening fascism every day.

Stalinism was able to exploit certain political weaknesses of artists like Woody Guthrie—a lack of theoretical knowledge that owed much to the history of the United States itself—to win support for a pseudo-populist reformism, in opposition to the political independence of the working class and the building of a revolutionary leadership. It was in this way that the bureaucracy in the USSR worked to head off and betray leftward-moving sections of the working class as well as artists and intellectuals.

These important political and historical considerations in no way negate the strengths and the significance of Guthrie and his work. “This Land Is Your Land” and other Guthrie songs endure for definite reasons, striking a chord among working people. The current exhibition depicts the life and times of Woody Guthrie in a lively and informative fashion.