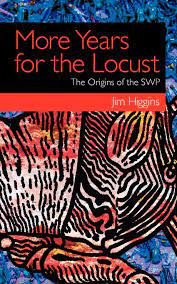 A proverbial saying, early 20th century, meaning that one's chosen style reflects one's essential characteristics; earlier in Latin, and the French naturalist Buffon (1707–88) in the form, 'Style is the man himself.'

"Everyone has the right to be stupid on occasion, but Comrade Macdonald abuses the privilege".

At the end of the film The Shawshank Redemption,[1] Andy Dufresne escapes from the prison in the night by crawling through the sewer pipe and escaping into a nearby river. Reviewing this book has a similar feel to it.

The author of this book Jim Higgins (1930-2002), began his political life as a member of the British Communist Party. He left in 1956 after reading Nikita Khrushchev's 'Secret Speech', which denounced the crimes of Stalin. Nothing is mentioned in this book about Higgin's life in the Stalinist Communist Party.

It is true that Higgins read "voraciously" the writings of Leon Trotsky but appears to have learnt nothing from then accept he did not agree with orthodox Marxism. Therefore it is a little strange that he joined Gerry Healy's The Club that became the Socialist Labour League and later the Workers Revolutionary Party. The Club played an important role in major industrial struggles and within the Labour Party, especially the movement in opposition to the development of the H-Bomb. In 1958, the youth paper Keep Left was relaunched monthly, and members were sent into the Labour Party's youth movement, the Young Socialists. Higgins almost immediately formed a faction against the leadership.

Although Higgin's book purports to be a history of the Socialist Workers Party(SWP), he spends an inordinate amount of time and space attacking the SLL and Healy, which makes me believe that Higgin's joined the wrong party by mistake. It seems pretty clear he was never a Trotskyist and retained much of his Stalinist baggage acquired during his membership of the Communist Party.

Higgins was thrown out of the SLL and joined Cliff's Socialist Review Group (founded in 1950). This group would later turn into the International Socialists, which later became the Socialist Workers Party. Cliff's Socialist Review came out of a factional struggle within the RCP. Before Cliff left the RCP, he had been a supporter of Max Shachtman's state-capitalist thesis. [2] Cliff was to build his tendency by recruiting from amongst disaffected RCP members based on their agreement with Cliff's revisionism of Marxism.

According to a Socialist Equality Party(SEP) perspective document, "Cliff was to argue that the Stalinist dictatorship was only the most finished expression of a new stage in the evolution of world capitalism, which was partially expressed by Labour's post-war nationalisations and those conducted by the newly independent colonial regimes. He placed the intelligentsia alongside the Stalinist bureaucracy as the midwife of yet another variety of state capitalism. The industrial working class had "played no role whatsoever" in the Chinese revolution, while in Cuba, "middle-class intellectuals filled the whole arena of struggle". From this, Cliff declared that Trotsky's Theory of Permanent Revolution was wrong because, "While the conservative, cowardly nature of a late-developing bourgeoisie (Trotsky's first point) is an absolute law, the revolutionary character of the young working-class is neither absolute nor inevitable… Once the constantly revolutionary nature of the working class, the central pillar of Trotsky's theory, becomes suspect, the whole structure falls to pieces."[3]

Higgins completely agreed with Cliff's attack on Trotsky's work. In an article written in 1963, Higgin's, agreed with his mentor and leader Cliff, saying, " The demise of British Trotskyism (and it died sometime before the corpse was formally interred) cannot be blamed only on its tactical inadequacies. However, it is true that with a more realistic appraisal of the world, they could have continued for much longer. But like Trotsky, they founded their attitude on an erroneous analysis of reformism and imperialism with a fundamental misappraisal of Stalinism. The characterisation of Russia as a counter-revolutionary abortion hid the fact of the profoundly capitalist nature of the Russian economy, its dynamism and its ability to survive. Far from being a shallow-rooted caste, the bureaucracy was, and is, an integral part of the Russian body politic".[4]

When I say "Style is the man", I do not mean Higgins wore bad clothes, which he did, but this book is not a serious history of the origins of the SWP or the early days of British Trotskyism. What passes for analysis from Higgins would not look out of place in the Beano or Dandy children's magazines.

Given the seriousness of his subject matter, Higgin's writes more like a  comedian or raconteur than he does a serious historian or political activist. He is, after all, dealing with historical issues in which millions of people lost their lives due to the betrayals of Stalinism and Social Democracy. Books like these should have a certain amount of gravitas.

To conclude, this book was written 20 years after Higgins had left serious political activity and is written to settle a few old scores rather than contribute to understanding the history of British Trotskyism. You would have thought that his editor at Unkant publishers would have had a word with him. His so-called history is unserious, lacking in any academic rigour and is the work of a "mock historian". Although talking about another ex Stalinist E.P.Thompson, this quote from Healy is apt for Higgins "Comrade Thompson seems to have cast away all the luggage. He was equipped within the Communist Party except one soiled old suitcase labelled anti-Trotskyism". His book is a product of that training.

1.   Higgin's papers are left with Senate House Library, University of London. They are well worth a look because they contain a goldmine of pamphlets etc., about the history of the Fourth International.

2.   The Heritage We Defend (30th Anniv. Edition): A Contribution to the history of the Fourth International-The work reviews the political and theoretical disputes inside the Fourth International, the international Marxist movement founded by Leon Trotsky in 1938. It is a devastating reply to former WRP General Secretary Michael Banda's document "27 Reasons why the International Committee Should be Buried Forthwith and the Fourth International Built." Contains a detailed and objective assessment of the political contribution and evolution of James P. Cannon, Trotsky's most important co-thinker in the US, as well as the evolution of the US Socialist Workers Party.The 2018 edition of the foundational 1988 work by David North, chairman of the International Editorial Board of the World Socialist Web Site, contains a new preface, photo section, and an extensive glossary.

3.   Higgin's writings for what they are worth can be accessed here. https://www.marxists.org/archive/higgins/index.htm

Posted by A Trumpet of Sedition at 05:51