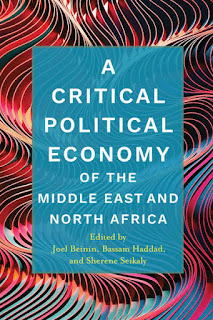 Joel Beini et al.’s volume is premised on the idea that ‘Rentier State Theory’ (RST) can no longer serve as an explanatory principle in analyzing state dynamics in the Middle East and North Africa (MENA). The editors presuppose that only a methodology rooted in critical political economy can explain the fortunes of MENA peoples in their respective polities.

Class used to be swept under the carpet, but not anymore in this volume. A Critical Political Economy of the Middle East and North Africa prides its credentials on reversing the trend put in place by RST. Given the neoliberal domineering order, marshaling the courage to discuss class is certainly an added value. Nevertheless, what is troublesome is the rejection of causality in this volume. The editors follow Louis Althusser’s structuralist approach where “…causes are simultaneous effects; all events are situated in a relational matrix; all social hierarchies are subject to contestations. (p. 1) The flattening of causes by equating them with effects and presupposing both as free-roaming enunciations explain the revival of classless for tracing classes’ role in deciding the destinies for emancipation and more towards stultifying the dynamics of social change.

The editors claim that developmentalism is a colonial and postcolonial paradigm par excellence. Developmentalism has been responsible for the reintegration of precapitalistic modes of production into global capitalism. The contributors show that indeed, postcolonial regimes share with their respective colonial antecedents more than the former are willing to admit. Applying units of measurements such as GPDs not only hides how measurements remain littered with ideological biases but that the sophistry of numbers can replace analysis. The oversight paves the way for what the editors seize as “the triumphalist account of the European Miracle” (p. 10) which is nothing but an ideological imposition of the imperial modes of production. Developmentalism sells the illusion that peoples of the MENA region may one day become the replica of Europe.

The book is divided into two uneven parts: Part I: “Categories of Analysis” has four chapters. Kristen Alff in Chapter One illustrates how diverse practices of land tenure under the Ottomans, and contrary to Orientalist allegations, have never been a hindrance to capital accumulation. Mercantile activities have been predominant in the region but the wide-ranging practices of Middle East elites have not been capitalistically-driven. The imperialists who came by the end of the nineteenth century and all through World War II coerced Egyptians and peoples of the Levant into capitalism (p. 26). But according to Alff, the imperialists simply pressed through various Oriental regimes such as the corvée system that was already there to enforce capitalism. The only violence that capitalism introduces in the Middle East, Alff finds, is the commodification of labor (p. 42).

Max Ajil, Bassam Haddad and Zeinab Abul-Magd in Chapter Two trace the fortunes of developmentalism in Egypt, Tunisia, and Syria. The 1967 defeat before Israel brought a coup de grace for Egypt and Syria’s developmental projects. But the coup de grace implies that subterranean forces, varying between class antagonism and cold war politics (stretching to the developmental policy of careless borrowings of Muhammad Ali’s successors, a century before) had been at work. Again, it is large-scale debts that were meant to fund development that decided the fate of Arab Socialism in Egypt and Syria. (p. 61) While Egypt succumbed immediately to the infitah policy, Syria resisted but not without a considerable cost to the material well-being of its population. Tunisia’s nationalist movement was only pitted against European settlers’ supremacy. The moment that supremacy was reversed, President Lahbib Bourguiba was happy with just replacing, not undoing, the colonial system (p. 51). The contributors explain the persistent infightings in Syria today on the ground that “…the war simply is too lucrative to dissolve.” (p. 67).

Chapter Three by Timothy Mitchell dispels roaming myths regarding the role of oil both in the MENA region and the world at large. Oil supply—readers find—is governed by conglomerates whose concern is not ensuring the supply of hydrocarbons but rather the control of production and circulation for the sake of cashing in monumental profits. Once ExxonMobil, Shell, BP, and Chevron become the principal players in the market, their efforts are geared toward the orchestration of scarcity: maintaining the illusory combination of risk and rarity whereby “…earnings stretch far into the future” (p. 73). No less consequential is Mitchell’s observation that, unlike coal which helped to create mass democracies, oil accelerates regressions towards inegalitarian polities. Labor has not challenged oil conglomerates, only nation-states have. The unfortunate side of this equation is that these states become resistant to coups (p. 77). Perhaps it is better to underline how MENA states have become resistant to democratic change since by exempting populations from taxation, governments could elide the maxim of no taxation without representation. Again, RST is found to be reductive because states benefiting from oil revenues have integrated the newly generated wealth into other business ventures and created independent assets, spelling rapid growth.

Shana Marshall in Chapter Four finds that the endurance of say, Egyptian, Syrian or Algerian militaries in power despite popular contestations can be explained through the latter’s congruent connections with the global military-industrial complex. Such regional militaries are not simple to state functionaries but form a powerful class whose interests explain the need for a powerful metropolitan class for growth through expanding arms sales. In recycling oil money in Western economies, the MENA militaries become indispensable, even, invincible for the world order as it is, making a radical change exceptionally challenging. Suffice it to know that “[m]ajor arms exporters and their host governments were often at the forefront of efforts to pressure the international financial institutions to rescind demands for sharp reductions in defense spending.” (p. 91)

Part II: Country/Regional Studies: comprises seven chapters of which I am zooming only on two as they best illustrate the editors’ stance vis-à-vis class. Adam Hanieh’s fifth chapter rejects Hossein Mahdavy’s RST whereby Gulf governments have been classically approached. Hanieh posits that state and class are phenomenologically interlinked. Therefore, reliance on oil may have initially served, even fueled, consumptive habits but in the long run, it has facilitated the diversification of Gulf economies, creating a wealth-generating class, not crooked elites. This position contradicts standard accounts of the Gulf. Meanwhile, Hanieh never undermines these economies’ heavy reliance on non-citizens as this labor regime can be fatal.

Chapter Eight by Muriam Haleh Davis follows Jacques Marseille’s presupposition that starting from 1930 onward France was overburdened by her colonies, and that the idea of metropolitan France enriching itself from the colonies is but a myth. Davis posits that no rupture exists when moving from colonial to postcolonial modes of production (p. 164). What can be considered as a rupture is between pre-colonial and colonial modes of production in which the appropriation of tribal lands not only explains the proletarianization of large sways of the Algerian population but the foundation of a system that systematically worked against the historical owners of the land.

Indeed, the importance of class is not news. Nevertheless, the book stays fixated on one class: a single-player; the one that is holding power at this point. Nowhere do readers see the strife that usually accompanies competing classes, a situation that leaves the same readers wondering if editors consider lesser classes unworthy of attention or whether attempts to alter the present configuration of classes in the region are simply naïve and wasteful. Such a stance explains a static account of class; an account divorced from regimes of land tenure, oil production and circulation, arms dealerships, state control, and the challenges facing labor. The integration of class in understanding the tapestry making the MENA political economy is not there yet. Various contributors, including the last one, zoom in on the role that the lesser classes or the subaltern may play in reshaping the political economy, but overall, the contributors treat the subaltern as an immobile category: only the imperialists, the capitalists are rendered as agents of history.

Regarding the rising fortunes of capital in the Gulf, it remains a mystery how the emergence of the capitalistic class which the contributors claim to be independent of rent has neither flattened the state’s capacity for coercion nor forced it toward democratization. Such a state of affairs leaves interested audiences wondering how could such feudal monarchies maintain their grip on power if indeed there exists a solid capitalistic class, as Hanieh advances. Indeed, the crash of the real-estate sector in 2009 offers a reflective insight into how privately owned businesses could be after all a bubble as they cannot survive without state patronage because they are concentrated in non-productive sectors. The thesis of the state playing the role of “a midwife of capitalistic class formation …” (p.121) cannot stand up to scrutiny. Similarly, Chapter Eight makes it look that Algeria’s independence was a charity from the capitalists. This is no different from squeezing facts to meet a theory. All these untenable conclusions result from confusing causes with effects.

While the book traces a progressivist line from Orientalism and modernization theories, the overall approach is non-emancipatory as it is geared toward justifying the triumphant status quo, the one that emerged after the 2011 popular uprisings. With this conservative outlook, it becomes unsurprising to find the three contributors of Chapter Two concluding that these uprisings subscribe to classical bourgeois revolutions (p. 66). They do, but only when flattening cause and effect, that is, when refusing to register that the uprisings initially started as incendiary but the revolutionary momentum was crushed in consequence of the counterrevolution coercive policies, the least of which has been physical violence. Thus, the book’s approach is geared towards confusing, not explaining what indeed took place. This underlines the extent to which a triumphant regime of political economy pretends to provide a critique by simply promoting capital’s counterrevolutionary moment.

Posted by A Trumpet of Sedition at 00:54