The Hammer and the Anvil: Dispatches from the Frontline of the Russian Civil War, 1918-1919 By Larissa Reisner, translator Jack Robertson.London: Bookmarks Publications, 2021. 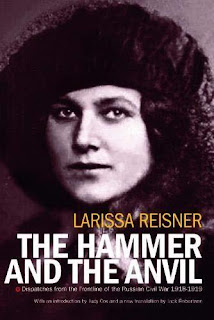 Along that path, your steps shall never fade.

For they are quite at home in your great shade.

In Memory of Reissner-by Boris Pasternak

"Larissa Mikhailovna Reissner's work on newspapers and her presence on the newspaper staff made us - newspaper labourers as compared with that great craftsman in style - somehow more wary and tense. How can you treat style and form with disdain when sketches like Reissner's are printed alongside your own? Even someone who never thinks especially much about form starts to reflect. For my part, let me say that none of the seekings of the Formalists (i.e. the advocates of formalism in literature) have made an impression on me. But the last articles of Larissa Mikhailovna Reissner made me learn a thing or two. I believe, too, that more than one generation of pupil-trainees at the State Institute of Journalism will learn the model of a good revolutionary style from her sketches".

In Memory of Reissner-by Lev Sosnovsky

"Having dazzled many, this beautiful young woman swept like a hot meteor against the backdrop of the Revolution. With the appearance of an Olympic goddess, she combined a subtle ironic mind and the courage of a warrior. After the capture of Kazan by the whites, under the guise of a peasant woman, she went to the enemy camp for reconnaissance. But her appearance was too unusual. She was arrested. A Japanese intelligence officer interrogated her. During the break, she slipped through the poorly guarded door and disappeared. Since then, she has worked in intelligence. She later sailed on warships and took part in battles. She devoted essays to the Civil War that will remain in literature. She wrote with the same vividness about the Ural industry and about the workers' uprising in the Ruhr. She wanted to see and know everything, to participate in everything. In a few short years, she grew up to be a first-class writer. Having passed unharmed through fire and water, this Pallas of the Revolution suddenly burned out from Typhus in the calm atmosphere of Moscow before reaching thirty".

"Much better to die in open combat, among comrades, with weapons in their hands. That is how I want to die. That is how hundreds and thousands die for this republic every day."

This new collection of work containing the writings of the outstanding Russian revolutionary Larissa Reisner was put together and published by Bookmarks which is the publishing arm of the British Socialist Workers Party. Despite having fundamental political differences with this group, the SWP and especially the translator Jack Robertson deserve significant recognition and commendation for this book. 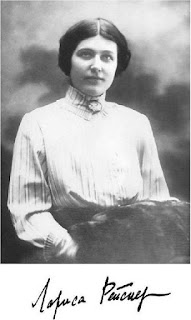 Larissa Reisner was an extraordinary member of the Bolshevik Party. She was a leading revolutionary figure and the first woman to be a political Commissar in the revolutionary Red Army. She was also an author and journalist. Much of the work published in this collection will be unknown to the modern-day reader. Reisner is best known to English speaking readers through her book Hamburg at the Barricades.[1] Her literary output was huge. Unfortunately, little has been translated into English. Hence the significance of this new collection. This new translation by Jack Robertson is based on her collected works currently being held in the British Library. The book contains 100 pages of Larissa Reisner's on the spot reports from the Red Army front from 1918 to 1919. 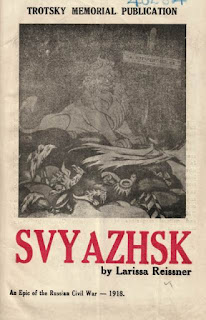 One jewel in the British Library collection held at Boston Spa is the 1948 English language pamphlet Svyazhsk: An Epic of the Russian Civil War – 1918, produced by the then Trotskyist Lanka Sama Samaja Party, founded in 1935.[2][3]

This new book concentrates on battles fought by the Red Army against White armies supported by Western imperialist governments. Reisner shows what a bloody conflict it was. The White counter-revolutionaries committed mass murder against anyone suspected of Communist sympathies, including the elderly, women and children.

Reisner refers to many key Bolshevik leaders of the era. Many held her in high regard. None more so that Leon Trotsky, commander in chief of the Red Army. In his autobiography My Life, he wrote about Reisner, saying she "flashed across the revolutionary sky like a burning meteor, blinding many... Her sketches about the civil war are literature. With equal gusto, she would write about the Ural industries and the rising of the workers in the Ruhr. She was anxious to know and see all and participate in everything."

Amid the death and destruction of the Russian Civil War, this highly educated young woman managed to write in an informative, pulsating and almost poetic way. She writes, "It is a strange feeling to be moving about in an unfamiliar building with windows and doors slammed shut, knowing full well that a battle to the death is about to take place in this godforsaken hotel. It is a racing certainty that someone will be killed, some will survive, some will be taken, prisoner. At such moments, all the words and all the rationalisations that help preserve your presence of mind go out the window. All that remains is an acute, penetrating sorrow — and underneath it, barely perceptible, a disorienting question: whether to flee or stand your ground. In the name of what? Face screwed up, choking with tears, the heart reiterates: stay calm, do not panic, no humiliating exodus." (36-37)

Her description of a particular event in which she witnessed the brutal slaughter by White troops of innocent bystanders as being something out of a Goya painting will stay in mind for a long time. Her work compares favourably with another outstanding chronicler of the Russian Revolution, John Reed, whose book Ten Days That Shook The World is required reading for anybody interested in this period of history.

One of the most important things that come out of her portrayal of the events of the Civil War is that she believed that the Revolution was a mass event. People were prepared to fight and die for this Revolution because a great cause inspired them. This was not just some coup organised by a handful of conspirators. 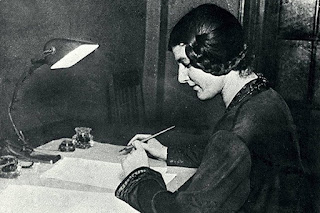 Reisner writes "Of course, individuals do not make history. However, in Russia, we had so few people and characters of his calibre. It was so difficult for them to break through the undergrowth of old and new bureaucracy that they rarely found themselves in the real-life, life-and-death struggle. It is because the Revolution had men like this, men in the highest sense of the word, that Russia was able to rally and recover. At decisive movements, they stood out from the general mass, and all of them displayed an authority - a full, genuine authority. They were aware of their heroic task and by their actions were able to rouse the rest of the wavering and pliable masses".

Particularly striking are Reisner's comments about the importance of the Red Army leader Leon Trotsky. In addition to Reisner's writings, the book contains two pieces from Leon Trotsky's My Life, A Month in Sviyazhsk and The Train. Reisner attaches great importance to Trotsky's leadership in defence of Sviyazhsk, which turned out to be a turning point in the civil war.

One facet of her character that permeates the book is her bravery. She thought nothing of risking her own life in order to save others. One such example is when The Red Army, along with thousands of others in Kazan, fled to Sviyazhsk in 1918. Reisner believed that her husband, the Bolshevik Fyodor Fyodorovich Raskolnikov, had been taken prisoner by the Whites. She risked her neck by trying to rescue him by returning to Kazan. Her problem came when because she was such a high profile Bolshevik, she was easily recognised by a White officer. As she writes in the book, she managed to escape when a driver of a horse cab who was sympathetic to the Bolsheviks helped her, saying he "saved people like me, humbly and resolutely, just like they saved thousands of other comrades scattered all over the Russian highways." (62)

Larissa Reissner died on 9 February 1926, in the Kremlin Hospital, Moscow, from typhoid; she was 30 years old. There is no small element of tragedy in this life cut so short. To produce such an important body of work at such a tender age is remarkable. No doubt, had she lived, she would have been able to add substantially to that work.

It is also clear that had she lived, that work would have taken on a much different character. Her close association with Leon Trotsky (she worked on Leon Trotsky's Commission for Improvement of Industrial Products) would have undoubtedly led to her arrest and possible execution at the hands of Joseph Stalin's counter-revolution. One thing is certain she would have defended not only herself but the Revolution from Stalinism.

It is perhaps fitting to end this review with a quote from a close associate of Leon Trotsky- Aleksandr Konstantinovich Voronsky, who wrote, "she died at the height of her powers, intellect and beauty. She died in a clinic from an unexpected, absurd and accidental illness after long-suffering had worn her out. She should have lived, however, and she should have died somewhere on the Steppes, at sea, or in the mountains, clutching a rifle or Mauser in her hands, for she was renowned for her spirit of adventure, her unceasing restlessness, her courage, greed for life and strong will. This was a fighting spirit, and, without sparing herself, she gave herself completely to the revolution".[4]

Posted by A Trumpet of Sedition at 03:07