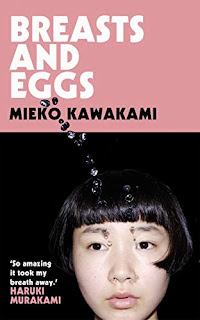 "I guess she was one of those people you see a lot these days who looked young from behind, but the second that she turned around…. Her fake teeth were noticeably yellow, and the metal made her gums look black. Her faded perm had thinned so much that you could see the perspiration on her scalp. She was wearing way too much foundation. It made her face look washed out and more wrinkly than it was. When she laughed, the sinews of her neck popped out. Her sunken eyes called attention to their sockets."

"the dominant view today is that women have always been to some degree oppressed—the usual term is "dominated"—by men because men are stronger, they are responsible for fighting, and it is in their nature to be more aggressive. Common among those who discuss sex roles are blunt judgments, empirically phrased, that casually relegate to the wastebasket of history".

Reading Mieko Kawakami's novel Breasts and Eggs, one concludes that it is not easy being a working-class woman in any country at the moment. Described as a Feminist, Kawakami seems more interested in describing the human condition rather than being saddled with this unsatisfactory label.

Her opposition to being called a Feminist writer has not stopped numerous people from labelling her so and a fighter against male domination. While God forbid that she stops writing the way she does, it would improve her writing if she imbued her characters with a little historical perspective. After all, men's relationship with women has been around for a long time and is a complex issue. While she would be met with hails of derision from her Feminist readers, she could do no worse than consult Friedrich Engel's extraordinary book The Origin of the Family, Private Property and the State.

Engels writes eloquently, "the dominant view today is that women have always been to some degree oppressed—the usual term is "dominated"—by men, because men are stronger, they are responsible for fighting, and it is in their nature to be more aggressive. Common among those who discuss sex roles are blunt judgments, empirically phrased, that casually relegate to the wastebasket of history the profound questions about women's status that were raised by nineteenth-century writers. "It is common sociological truth that in all societies authority is held by men, not women," writes Beidelman; "At both primitive and advanced levels, men regularly tend to dominate women," states Goldschmidt; "Men have always been politically and economically dominant over women," reports Harris. Some women join in. Women's work is always "private," while "roles within the public sphere are the province of men," writes Hammond and Jablow. Therefore "women can exert influence outside the family only indirectly through their influence on their kinsmen".

The first problem with such statements is their lack of historical perspective. To generalise from cross-cultural data gathered almost wholly in the twentieth century is to ignore changes that have been taking place for anywhere up to five hundred years as a result of involvement, first with European mercantilism, then with full-scale colonialism and imperialism. Indeed, there is almost a kind of racism involved, an assumption that the cultures of Third World peoples have virtually stood still until destroyed by the recent mushrooming of urban industrialism. Certainly, one of the most consistent and widely documented changes during the colonial period was a decline in the status of women relative to men. The causes were partly indirect, as the introduction of wage labour for men, and the trade of basic commodities, speeded up processes whereby tribal collectives were breaking up into individual family units, in which women and children were becoming economically dependent on single men. The process was aided by the formal allocation to men of whatever public authority and legal right of ownership was allowed in colonial situations, by missionary teachings, and by the persistence of Europeans in dealing with men as the holders of all formal authority. The second problem with statements like the above is largely a theoretical one. The common use of some polar dimension to assess woman's position and to find that everywhere men are "dominant" and hold authority over women not only ignores the World's history but transmutes the totality of tribal decision-making structures (as we try to reconstruct them) into the power terms of our society.[1]

Breasts and Eggs is Kawakami's first full-length novel for English-language readers. This novel takes its characters and setting from a short novella published in 2008 and was awarded Japan's prestigious Akutagawa Prize. This book, it must be said, is not an easy read. The novelist and politician Shintaro Ishihara described Breasts and Eggs as "unpleasant and intolerable". This statement, however, can be taken in many ways.

While it is perhaps unusual for two people to translate a book, it is beautifully done by Sam Bett and David Boyd. However, they have faced criticism for moving away from the essence of Kawakami's use of the Osaka dialect, Which reinforces the working class nature of her characters. The dispute over their translation is above my pay grade, so I will leave it to others to argue the merit.

Madeleine Thien writes in her review, "the real Osaka dialect is not even about communicating. It is a contest. How can I put it? It's an art" – translators Bett and Boyd do not render it. In 2012, an excerpt of Breasts and Eggs was published by another translator, Louise Heal Kawai, who offers Makiko's "I've been thinking about getting breast implants" as "Natsuko, I am thinking of getting me boobs done". Kawai compares the Osaka dialect to Mancunian: rough, friendly, outspoken. In Bett and Boyd's translation, Kawakami's feminism is vivid, but the language occasionally feels placid; meanwhile, in Kawai's translation, feminism and language collide in a way that feels deliciously irreverent. Here is Brett and Boyd, translating Midoriko's response to her mother's desire for surgery: "It's gross, I really don't understand. It's so, so, so, so, so, so gross … She's being an idiot, the biggest idiot." Here is Kawai: "I don't get it. PUKE PUKE PUKE PUKE PUKE! … She's off her trolley, my Mum, daft, barmy, bonkers, thick as two short planks."[2]

To what extent this is an autobiographical piece will be known only to some extent by the author. Maybe women will have a closer bond with the characters in the book, but as a man, the plight of the women in the book also forces the male reader to confront their past and how they fit into the modern-day World.

The book's narrator represents a new generation of Japanese women who, while rejecting much of Japanese cultural, social and political norms, have yet to strike out in a new direction. Sarah Chihaya writes, "The idea that a woman, or anyone for that matter, might be able to articulate and lay claim to exactly what they want is laughably unsuited to these uncertain times. So what kinds of novels can be written about women who may not want anything from a world that may not have anything to offer them?".[3]

The book is divided into two parts, Breasts and Eggs. I am not inclined to separate the book into parts. The book deals with many problems of everyday life. Kawakami's first chapter is titled "Are You Poor?". It must be said that Kawakami is one of the few writers addressing the problems faced by working-class women in society. Her work cuts across the money-grabbing women of the #MeToo movement

The main character in the book is largely unconcerned with desirability, romance, or sexual pleasure but has yet to find a replacement for these basic social mores. She is not content with putting up with how she has been treated in the past but has yet to formulate a social or political way forward. One feels this novel is closer to the author's life than she may let on. The intensity of this study of Japanese working-class women forces both male and female readers to re-examine their own lives.

Kawakami is a precise and razor-sharp writer who discusses complex and sensitive subjects honestly and sensitively. She is a keen observer of the problems faced by working-class women. As this brutally honest depiction of one of the characters in the book shows, "Natsu sees everything and everyone she encounters, including herself; its dryness saps the poignancy from statements like "She reminded me of Mom." It is not that Natsu is devoid of emotion—her sadness at the earlier loss of her beloved grandmother is apparent throughout the novel. Yet that sadness, and her loneliness and estrangement, do not lead to yearning or desire. Mothers and grandmothers haunt all of the women in this novel, not just Natsu and Maki, but their ghosts do not emit the glow of family romance. Rather, the spectral presences are reminders of the accumulating malaise of the female body as it participates, willingly or unwillingly, in the mingled economies of labour and sexual desire—as one of Natsu's not-quite-friends unforgettably declares, their mothers and their mothers before them were just "free labour with a pussy." While a powerful bond of love joins these successive generations, it is a luxury that contemporary women's schedules cannot often afford".

One can see why the novel was harshly criticised in some conservative quarters because it exposes the horrendous plight of working-class women in Japanese society that treats them as second-class citizens.

As Vrinda Nabar writes, "It is easy to understand the outrage caused by Breasts and Eggs among a section of readers in Japan. Published in a newly expanded form in English translation in April this year, the novel's titillating title belies its upfront focus on themes that have less to do with female anatomy and more with the ways many women have quietly subverted gender roles. The discursive style allows its narrator Natsuko Natsume (a blogger nobody reads), to touch on several aspects of a single woman's life in Tokyo".[4]

Like all good writers, Kawakami draws heavily on her own experiences as a woman in modern Japan. However, there is nothing parochial about her work as she discusses universal themes of loneliness and sexuality in capitalist society. Her novels have struck a chord with hundreds of thousands of her readers. I highly recommend this book and cannot wait to read and review her new book. [5]

Posted by A Trumpet of Sedition at 02:26