The Tragedy of the Worker-Towards the Proletarocene-by The Salvage Collective-Part of the Salvage Editions series-112 pages / July 2021-Verso publication. 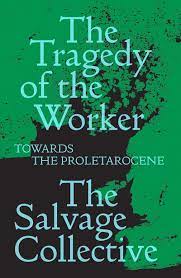 Liberation is a historical and not a mental act. Communists do not oppose egoism to selflessness or selflessness to egoism, nor do they express this contradiction theoretically, either in its sentimental or in its high-flown ideological form; they rather demonstrate its material source".

The German Ideology by Marx and Engels[1]

From the start, it must be said that this book is a thoroughly reactionary, pessimistic, anti-Marxist and anti-working class diatribe. A reader would be hard press to find a more right-wing publication this year. It is to Verso's eternal shame and damnation that it collaborated with its publication.

Despite containing a few left-wing phrases, the word communism is mentioned a few times. But even when they do this, they distort and pervert Marxism. Like in this quote from Marx, What the bourgeoisie produces, above all, are its grave-diggers taken from The Communist Manifesto, which is correct what follows is a perversion of Marxism they continue (the) "tragedy of the worker, must be her grave-digger as long as she works for capitalism. Capital never extracts energy from the Earth, but it makes a taxing withdrawal from the worker's body".

The authors have nothing to do with Marxism. The basic premise of this book is that Mankind is doomed unless it reverts to a pre-capitalist society and that the working class must share some of the blame for the state of the planet because it is a by-product of the development of capitalism.

As Tom Carter writes, "Theodor Adorno and Max Horkheimer, two leaders of the Frankfurt School, concluded that the Enlightenment was to blame for all the authoritarianism and barbarism that characterised the first half of the 20th century, because it was all the inevitable result of a misguided attempt to exert control over nature through science and reason. Adorno would go on in Negative Dialectics (1966) to claim that all systemic thought is inherently authoritarian.[3]

The Tragedy of the Worker's main critique of Classical Marxism is that it is anthropocentric—that it is only bothered about human needs. The author's viewpoints are of an ecocentric philosophy that is nature-centred.

As Joel Kovel, long-time editor of the journal Capitalism Nature Socialism, writes, "We believe in the intrinsic value of nature, and believe that the highest expression of this is the global reclamation of the commons, which we call ecosocialism".[4] It must be said that these so-called radical environmentalists have nothing to do with socialism or even Marxism. In many ways, they use these terms much like the Nazi's did in the 1930s to fool the working class and hide their reactionary agenda.

While the political outlook of this so-called radical environmentalist stems from the Frankfurt School, the authors of this book, for the most part, came out of a bitter split in the British Socialist Workers Party in 2013[5]. Their reactionary perspective that was tolerated and in many ways shared inside the SWP for so long says more about the SWP than it does about the authors of this book.

As Chris Marsden writes, "The dispute has focused almost exclusively upon allegations of rape made against a leading member of the party and the mishandling of the charges by the SWP's Disputes Committee. The opposition is led by unashamedly referred to as the party's "celebrity members", such as Richard Seymour, who runs the blog Lenin's Tomb, and fantasy writer China Miéville. It draws support from academia and the Socialist Workers Party Students Societies. Their views are posted widely, and internal documents are routinely leaked to hostile publications. Attempts by the SWP leadership to pose as an orthodox opposition to such positions are a transparent fraud. The SWP has incubated the elements involved in the anti-leadership faction and their politics. They draw on positions advocated for years by the party.

The Tragedy of the Worker was reviewed in the SWP's main theoretical journal, the misnamed International Socialism by Ian Angus.[6] Angus makes mild criticism of the book but offers an olive branch to the authors, saying, "Because of the unfortunate tendency of the left to treat every disagreement as grounds for ostracism, I must stress that this is a disagreement among environmental activists, and I raise it intending to advance our common project, which an open discussion of our differences can only strengthen".

Angus completely ignores the confused, desperate, and deeply pessimistic approach these authors have to global climate change. Take this quote "In the era of Marx and Engels, and in the long century after, communists dreamed of liberating humanity and enjoying a world of plenty, sharing in abundance. Had October inaugurated a new era of revolutions, had barbarism's reign ended a century sooner, perhaps that is the world we would have. If Communism – automated or otherwise – was possible at that moment, we hypothesise that now, as we race past tipping point after tipping point, it is no longer – at least not before a long and difficult age of repair. From our benighted vantage point, the birth, growth and exploitation of the working class have been inextricable from biocide and catastrophe. That is to say, global proletarianisation and ecological disaster have been products of the same process. The Earth the wretched would – will – inherit, will be in need of an assiduous programme of restoration. While we may yearn for luxury, what will be necessary first is Salvage Communism"[7].

It is hard to work out where to begin in attacking this reactionary nonsense. This idea that we could "salvage Communism" is hardly original. As David North points out, Michel Pablo made a similar approach in the 1950s. North writes, "The outbreak of the Korean War in 1950 provided a degree of political credibility to the conception that the United States was preparing for all-out war against the Soviet Union. Still occupied with a discussion that centred on the process through which the social character of the buffer states had been transformed under Stalinist auspices, Pablo seized upon the possibility of war, converted it into an imminent inevitability, and made it the starting point and centrepiece of a new and bizarre perspective for the realisation of socialism. Adopted at the ninth plenum of the IEC of the Fourth International in 1951, the theory of "war-revolution" argued that the eruption of war between the United States and the Soviet Union would assume the form of a global civil war, in which the Soviet bureaucracy would be compelled to serve as the midwife of social revolutions.

In the schema worked out by Pablo, the international proletariat ceased to play any independent role. Instead, all political initiative in shaping world events was attributed to world imperialism and the Soviet bureaucracy. This was spelt out in the document, suggestively entitled "Where Are We Going?" The theoretical essence of his perspective was spelt out as follows: "For our movement, objective social reality consists essentially of the capitalist regime and the Stalinist world. Furthermore, whether we like it or not, these two elements, by and large, constitute objective social reality, for the overwhelming majority of the forces opposing capitalism are right now to be found under the leadership or influence of the Soviet bureaucracy".[8]

To conclude, this book is deeply reactionary and pessimistic. The authors  seem to want to wallow in their disorientation and pessimism, saying, "Salvage has earned its pessimism. There is much to be pessimistic about. Fascist politics have not enjoyed a better climate since 1945. The climate crisis is underway and bringing with it yet further fecund material for a reconstituted far-right. The organisation and militancy of the working-class continue to fray, as does the revolutionary tradition. Hope is still precious; it must still be rationed.  Yet, having yearned for our pessimism to be proved wrong and been giddied by Evental shifts which allow for habitable outcomes to be war-gamed, Salvage is tentatively open to a more generous ration of hope. Salvage, recognising that the catastrophe is already upon us and that the decisive struggle is over what to do with the remains, is for the Communism of the ruins.[9]

The authors are a collection of disillusioned petty bourgeoisie pseudo lefts who, even if they believed which I doubt that the working class could solve the climate crisis, they do not believe that now. They see the working class as passive and collaborates with capitalism in bringing about Mankind's destruction. Not a revolutionary class that can fight for a socialist cause that will nationalise giant corporations and banks under workers' control and abolish capitalism and the nation-state system.

[6] Anthropocentrism versus ecocentrism: notes on a false dichotomy

[7] The Tragedy of the Worker: Towards the Proletarocene

[8] The Heritage We Defend-

Posted by A Trumpet of Sedition at 08:31