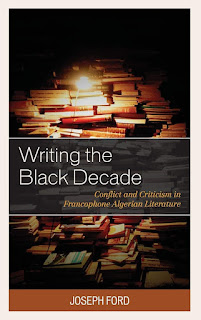 In studying Francophone Algerian Literature of the 1990s, a period otherwise known as the Black Decade or la Décennie Noire, Ford finds out that the literary outputs reify it instead of clarifying the conflict.  Indeed, literary outputs published by celebrity figures both during the 1990s and after not only stay neutral before the ideological struggle between the secular-and-military status quo on the one hand and their Islamist contestants on the other but deem it their mission to testify for posterity.

That war was tagged cultural and simplified to the point of pitting progressivists against depressives. Such a binary portrayal gained currency during the post-Cold War context, where ideas of the clash of civilizations became the Modus Operandi. Generations of Algerian authors, Ford specifies, have uncritically fallen to that categorization less because they were complicit with the state’s narrative but more due to channels of reception in France. Often, those channels recourse to timeless portrayals that reactivated the spectacle (never the essence) of Algeria’s war of independence: enlightened Algerian democrats as Les pieds noirs against bearded medievalists, reactivating FLN recidivists. Only from February 2019 onward, the literary scene starts to disentangle this framing, counting some writers who dare to explore the black decade with less bias and a satisfying complexity.

In discussing Francophone Algerian literature, Ford follows a chronological approach. Chapter One studies testimonial novels by authors such as Rachid Mimouni. Written in realism, Mimouni’s novels, like Rachid Boujedra’s, have been behind instituting the binary and reductive approach. To their credit, Assia Djebar and Maïssa Bey practised restraint, specifying that they prefer not to subscribe to either representation or testimony.

Chapter Two explores the writings of Salim Bachi as the latter recourses to myth, a promising mode of writing that breaks with Mimouni’s testimonial fiction. The mythical undertaking registers his embrace for historical readings of the Black Decade. But 9/11 sees him falling on the trope of the clash of civilizations.

Chapter Three focuses on imaginative outputs by Habib Ayoub. Here grotesque renditions of leaders deconstruct the ways ordinary Algerians become complicit in orchestrating their own apolitical lives. Both leaders and the subaltern equally evoke the language of heroism besetting the war of independence.

Chapter Four examines Kamel Daoud’s Meursault, contre-enquête and finds that contrary to the nuanced approach besetting the work, the framing of the work and its reception by heavy French media and the polemics marking Daoud’s journalistic writings have been behind a resurgence of the old binary lenses.

Chapter Five reviews Mustapha Benfodil’s Archéologie du chaos (amoureux). Fords find this work a bold statement elucidating its author’s dissatisfaction with the testimonial mode and his radical disentangling from simplistic reading. Ford assumes that conceptual experimentations such as ‘wild readings’ or les lectures sauvages do reverse political power because complicity with the powers that be is thought to be rooted in mistaken readings.

The transition of the Algerian novel that addresses the Black Decade from the realist to the mythical to the grotesque to quasi-historical to the modernist mode of expression illustrates promising progress. Undoing the complicity of oppositional discourses with the status quo can only be possible through undoing the binary matrix that has stigmatized both the practices of power and society throughout the Black Decade and since.

Ford seems to be in awe of Benfodil’s experimentations and is somehow satisfied with the overall evolution of Francophone Algerian authors’ perception of what took place during the 1990s. Perhaps, he should read these experimentations for what they are: mere lexical excitations. Benfodil’s spectacled readings cannot allow him to fundamentally grasp the Black Decade or even the hirak of February 2019 as a class struggle. Grappling with Daoud’s fiction and journalism remains a promising path for approximating that struggle irrespective of media framings.

Posted by A Trumpet of Sedition at 02:21