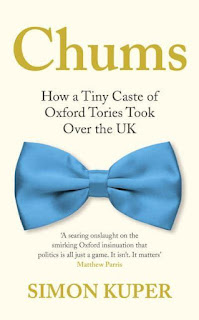 "Ruling Britain was the prerogative of their caste",

"To understand the man, you have to know what was happening in the world when he was 20."

Chums is a useful but limited look at a group of Oxford Tories who now run the country on behalf of a section of the English bourgeoisie. As Kuper adeptly explains, this group is hardly a set of intellectual giants.

One of the group's cheerleaders and media friend Toby Young was forced to admit that "It has become a commonplace of Islington dinner parties that the reason Britain is in such a mess is because of its wretched class system which has condemned us to be ruled by a bunch of incompetent Tory toffs. Not only are they lazy and amoral, believing the rules don't apply to them, but for the most part, they are innumerate and scientifically illiterate, thanks to the humanities bias at Britain's elite public schools and Oxford University. Little wonder they have made such a hash of governing the country, culminating in the disastrous decision to leave the European Union".[1]

The leader of this group is Boris Johnson, who learnt at a very early age that he was never going to win a sustained intellectual argument with anyone. So, according to Kuper, to defeat opponents whose arguments were better, he ignored them and offered "carefully timed jokes, calculated lowerings of the voice, and ad hominem jibes".

During his time at Oxford, Johnson was at the heart of a somewhat incestuous network of friends that now hold political power in Britain. This clique, according to Kuper, was "born to power". More importantly, it was this clique that organised Brexit. According to a statement by the Socialist Equality Party, "the Remain and Leave wings of the British bourgeoisie had opposing strategies to respond to the inexorable drift towards trade war between the major powers. Both factions are equally reactionary. The Remain faction wanted to preserve Britain's global position within the EU trading bloc and its massive single market. The Leave forces viewed the EU as an impediment to the UK's pursuing a global trade and investment policy as a deregulated base for financial speculation, centred on a strengthened alliance with the US and directed against Germany and France.

Brexit is, therefore, a product of global economic and social contradictions produced by capitalism. This was underscored within months of the referendum vote by the election of Donald Trump in the 2016 US presidential election, standing on his nationalist "America First" agenda. Trump embraced Brexit as a weapon to encourage the breakup of an EU he denounced as a "competitor," not an ally, and as a "cartel" run in the interests of Germany.[2]

If Johnson and his friend's behaviour during their reign has taught us anything, this psychopathic social class has lost any right to rule. During their reign, Johnson and his allies launched a one-sided class war. It is clear to anyone that Johnson's reputation is now in tatters, but according to Chris Marsden, "the more fundamental issue at stake is whether he is too damaged to navigate the treacherous waters British imperialism has now entered. Most importantly, can Johnson lead Britain's war drive against Russia and China, in alliance with the United States, while carrying out the brutal offensive against the working class needed to pay for it?"[3]

While it is politically important that Kuper has identified the class and social base of the Tories, it is hoped that Kuper's next book would do the same for the Labour Leadership. It also contains a significant number of privately educated individuals, and therefore Labour is no less a party of the super-rich than the Conservatives.

Kuper has done a good job is raising the question of class in Britain. The crap espoused by Labour and Tories alike that Britain is a classless society has been badly exposed as a lie. However, under conditions of mass death and massive levels of social inequality, it is a dangerous act to raise the issue of class in Britain because Britain's ruling elite sees it as "tantamount to an invitation to working people to join a class war that has—to date—been raging in an almost entirely one-sided fashion".

[2] Britain leaves the European Union: Against nationalism, For the United Socialist States of Europe!- https://www.wsws.org/en/articles/2020/01/31/pers-j31.html

Posted by A Trumpet of Sedition at 10:28