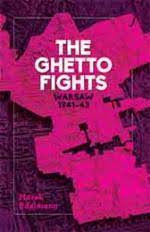 "The decline of capitalism has suspended the Jews between heaven and earth."[1]

"I am not acquainted with the young author of this booklet, one of the leaders of the Jewish Uprising. He brought me a typewritten copy, and I read it all at once, unable to interrupt my reading for a single moment. ... "I am not a writer, " he said. "This has no literary value. "However, this non-literary narrative achieves that which not all masterpieces can achieve. For it gives in serious, purposeful, reticent words a record, simple and unostentatious, of a common martyrdom, of its entire involved course. It is also an authentic document about perseverance and moral strength kept intact during the greatest tragedy in the history of mankind."

This book is the second reprint by Bookmarks (the publishing arm of the British  Socialist Workers Party) of Marek Edelmann's extraordinarily harrowing and inspiring account of the Jewish Warsaw Ghetto uprising 1941-43 against the Nazis. The book contains an introduction by SWP member John Rose of which more will be said later in this review.

Edelman was a member of the Bund, an organisation of Jewish socialists, who, along with other groups, including radical left-wing Zionist organisations, militarily attacked the Nazis after they began to deport Jews from the Ghetto to the various Nazi concentration camps.

Despite several warnings from outside that Jews were being systematically murdered on an industrial scale, few inside the Ghetto believed it was happening. Edelman writes that "The Warsaw ghetto did not believe these reports. People who clung to their lives with superhuman determination could not believe that they could be killed in such a manner. Only our organised [youth] groups, carefully noting the steadily increasing signs of German terror, accepted the Chelmno story as probable and decided upon extensive propaganda activities to inform the population of the imminent danger. A meeting of the Zukunft cadres took place in mid-February 1941, with Abrasha Blum and Abramek Bortensztein as speakers. All of us agreed to offer resistance before being led to death. We were ashamed of the Chelmno Jews' submissiveness, of their failure to rise in their defence. We did not want the Warsaw ghetto ever to act in a similar way. "We shall not die on our knees," said Abramek, "Not they will be an example for us, but men like our comrade Alter Bas." While Chelmno victims were dying passively and humbly, he, after having been caught as a political leader with illegal papers in his pocket, and tortured in every manner known to the Germans, resisted the barbarous torment through superhuman efforts when but a few words would have saved his life".[2]

The book is light on analysis and is narrative-driven. Edelmann's description of everyday life in the Ghetto is harrowing and, at times, hard to comprehend. He writes, "The sick, adults and children, previously brought here from the hospital lie deserted in the cold halls. They relieve themselves right where they lie and remain in the stinking slime of excrement and urine. Nurses search the crowd for their fathers and mothers and, having found them, inject longed for deathly morphine into their veins, their own eyes gleaming wildly. One doctor compassionately pours a cyanide solution into the feverish mouths of strange, sick children. Offering one's cyanide to somebody else is now the most precious, irreplaceable thing. It brings a quiet, peaceful death. It saves from the horror of the cars".[3]

The Nazis used the Ghetto as a holding area to process people to the concentration camps, and they were able to do this with a minimum of fuss because of the pernicious role played by the Jewish Council, who collaborated with the Fascists in the industrial-scale murder of Polish Jews.

After the final decision was made to liquidate the Ghetto, many different political organisations came together to fight the Nazis. Despite having few weapons, the various fighting units killed many Nazis.

Marek Edelman wrote this book just after the war finished and was published in Warsaw in 1945, then in English in 1946. The book raises several important issues, such as the collaboration of the Jewish Council in facilitating the Nazi's mass death programme. It also highlights the difference between the lives of working-class people who lived and died in abject squalor and sections of middle-class Jews who could live a relatively comfortable life for a short time. As Jim O'Connell writes, "During the early days of the Ghetto and indeed to different degrees even, later on, many aspects of normal social life continued to exist relatively unaffected by the enforced confinement and growing instances of deportations and physical abuse. Some of the wealthier members of society carried on a relatively privileged existence while their fellow residents died of hunger on the streets. Commerce continued along with black-market dealings for profit. In such an environment, it might be that even those people with the most access to information (by paying for it) refused to believe that the same fate that was visited on the lower classes could be inflicted on themselves".[4] The book counters the myth that there was no opposition amongst the Jews to the Nazi Genocide. It is clear from the bravery of the Ghetto Fighters that some Jews fought back.[5]

There are several issues that Edelmann does not touch upon it in the book. The fact that the Ghetto fighters fought alone and had few weapons was primarily down to the role of Stalinism. Their brutal stance was best summed up by Stalin's general, Rokossovsky, "We are responsible for the conduct of the war in Poland, we are the force that will liberate the whole of Poland… [The Home Army] have butted in like the clown in the circus."[6] The Red Army might have helped deliver the knock-out blow against Hitler in the end, but the 1944 Polish uprising was defeated because Stalin ordered them to halt outside Warsaw. Most importantly, the Kremlin's suppression of independent political action by the working class of Europe had a devastating impact on the ability of the Jewish working class to fight the Nazis.

Edelmann is slightly critical of some of the political parties' lack of support for the Uprising, writing, "the fact that none of the other active political parties took part in this action is significant as an example of the utter misconception of existing conditions common to Jewish groups at the time. All other groups even opposed our action. It was, however, our determined stand that momentarily checked the Germans' activities and went on record as the first Jewish act of resistance". Other than a few paragraphs, Edelmann has no substantial political analysis of the leadership inside the Ghetto.

While it is commendable of the SWP to publish this account of the Warsaw Ghetto, a couple of issues arise from John Rose's introduction. Rose's friendship and use of the work of Professor Anthony Polonsky is questionable. Polonsky's defence of Adam Czerniakow(who committed suicide rather than collaborate with the deportations of the Jews to the concentration camp) is contentious.

The most important thing I take issue with is Rose's uncritical attitude towards Edelmann's participation in the Solidarity movement. As Dorota Niemitz points out "the vast majority of the petty-bourgeois and academic advisers of the Solidarity trade union aspired to integrate Poland into the world and European capitalist economy and supported "shock therapy", austerity measures and Poland's accession to NATO and the EU. This, and not the defence of the working class, was the content of their call for "freedom" and "democracy."[7]

This is an important book as it gives an account of the bravery of sections of the Jewish people in their fight against Fascism and nails a myth that the Jews went quietly into the good night. It is not a political account of the struggle against Fascism, so I have included some further reading.

3.   Wolfgang Weber-Poland 1980-1981: The Solidarity Movement and the Perspective of Political Revolution-Mehring Books.

Posted by A Trumpet of Sedition at 03:25