The Spartacus Wars by Barry Strauss 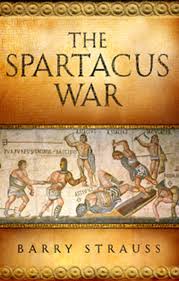 "As an astute judge of character, Spartacus might have chosen some men without prior military experience to lead units of his army."

The Spartacus Wars by Barry Strauss is an excellent introduction to understanding Spartacus and the most famous slave revolt in history. The book is well researched and not bogged down with footnotes and is certainly not a dense academic tome. As one reviewer said, "In the Spartacus War, Barry Strauss presents a historical portrait of Spartacus to a mass audience".

Strauss was not just content with researching his subject from the confines of Cornell University but made numerous trips to the Italian countryside in order to see where many battles. Took place.

Strauss is no tourist historian, and his knowledge stands out in the book. Strauss displays admiration for Spartacus. For Strauss Spartacus was no ordinary Slave but a "murmillo gladiator". Strauss also describes Spartacus battlefield tactics "not as intuition but reveals that the former slave had served as a Thracian auxiliary to the Roman army where he learned about Roman military tactics".

Strauss presents a good case for his historiography. His task was made more difficult due to the lack of information on his chosen subject. As one reviewer said, "Not content to give the evidence, Strauss usually picks a version of the events and backs it up, or works from multiple hypotheses."

Strauss mixes his interpretations with useful knowledge of the history and background of the period. Unlike many figures from ancient times, Spartacus has a resonance down the centuries even today his name is used by anyone who purports to fight "tyranny and totalitarianism". Even the most right-wing figures had claimed Spartacus for themselves according to The Sunday Times review by Mary Beard "When Ronald Reagan addressed the British parliament in 1982, he used Spartacus, the Roman rebel slave, as a symbol of the fight against. For Reagan, Spartacus stood for the struggle of western democracy against Soviet oppression."[1]

However, it is on the left both politically and historically that Spartacus lies. He was principally an egalitarian; all the loot captured from the Romans was shared amongst his troops. Karl Marx said that Spartacus inspired people in the battle against Capitalism in his words he described him as "a great general, a noble character, a genuine representative of the ancient proletariat". These sentiments were echoed by Vladimir Lenin co-leader of the Russian Revolution. A hundred years earlier, the great Voltaire called Spartacus's rebellion "the only just war in history".

Many people's understanding of Spartacus is informed by the Hollywood movie starring among others Kirk Douglas. The film itself was a struggle against "oppression" not Roman but American Capitalism. The 1960 Kirk Douglas film was based on a struggle against McCarthyism. The film script was based on the book by one blacklisted author, and the screenplay was written by another.

According to Marty Jonas "Kirk Douglas was impressed with Kubrick and brought him on as director of Spartacus, which Douglas starred in and produced. Kubrick replaced Anthony Mann, who had already shot the beginning and several scenes. Though a cut above the usual big-budget historical films, and with a worthy subject--the massive slave revolt in ancient Rome--it still suffered from the bloatedness and heroics of most Hollywood epics. Kubrick described himself as a "hired hand" and had significant differences with Douglas. It was not a happy time creatively for him. But Spartacus showed the studios that Kubrick could be a responsible Hollywood director, and, conversely, demonstrated to Kubrick that his place was not in Hollywood. His disillusionment with the studio system brought him to England, where he made Lolita (1962) and settled for the rest of his life".[2]

In an interview given to publicise the book Strauss elaborates further on the movie, Yerxa: Who was the "real" Spartacus, and how does he compare to Kirk Douglas's character in Stanley Kubrick's 1960 film?
Strauss: "Perhaps the most surprising thing is that the Kubrick film isn't complete fiction, but offers some historical truth. The fact is that Spartacus really was a slave and a gladiator in Capua, Italy, and he did lead a revolt. As the movie shows, it started in the kitchen of the gladiatorial barracks with the men using basic kitchen utensils to fight the guards and break out. And it's even true that Spartacus had a ladylove as he did in the movie. But there are some real differences as well. The movie Spartacus was born a slave and was the son and grandson of slaves, but the real Spartacus was born free. He came from Thrace, roughly equivalent to today's Bulgaria. And far from being a lifelong opponent of Rome, he started out as an allied soldier in the Roman army. He fought for Rome. His fate, ending up as a slave and gladiator, was quite unexpected and quite unjust. The Romans themselves admitted that Spartacus was forced to become a gladiator even though he was innocent".[3]

Strauss makes clear that there is a problem writing on Spartacus and that is that the majority of evidence of the slave rebellion led by Spartacus in 73BC, was written more than 100 years after the event. Most of this was written by Roman historians who were far from objective. Straus also makes clear that political issues were in play. Although that is not to say that some Roman historians were favourable to Spartacus, Strauss says "I was personally struck by the degree to which later Roman writers presented him as a good guy,". "They respected him and blamed themselves for the war." The historian Plutarch writes "And seizing upon a defensible place, and they chose three captains, of whom Spartacus was chief, a Thracian of one of the nomad tribes, and a man not only of high spirit and valiant, but in understanding, also, and in gentleness superior to his condition, and more of a Grecian than the people of his country usually are."

I thought Strauss could have made more use of Plutarch, in his book on Roman History, the Life of Crassus: writes "The insurrection of the gladiators and the devastation of Italy, commonly called the war of Spartacus, began upon this occasion. One Lentulus Batiatus trained up a great many gladiators in Capua, most of them Gauls and Thracians, who, not for any fault by them committed, but simply through the cruelty of their master, were kept in confinement for this object of fighting one with another. Two hundred of these formed a plan to escape, but being discovered, those of them who became aware of it in time to anticipate their master, being seventy-eight, got out of a cook's shop chopping-knives and spits and made their way through the city, and lighting by the way on several wagons that were carrying gladiators' arms to another city, they seized upon them and armed themselves. And seizing upon a defensible place, they chose three captains, of whom Spartacus was chief, a Thracian of one of the nomad tribes, and a man not only of high spirit and valiant, but in understanding, also, and in gentleness superior to his condition, and more of a Grecian than the people of his country usually are."[4]

Beard writes "What preoccupied serious Roman historians, looking back to the rebellion, were two political issues. First, why did it take the Roman forces two years to crush this band of runaways and their hangers-on, as they wandered to and fro around Italy? (The answer must be that, to begin with, the senate underestimated the danger and sent second-rate generals with untrained armies to deal with it.) Second, which Roman commander ultimately gained most, in honour, prestige and career advantage, from finishing off Spartacus's uprising? Was it Crassus (played by Laurence Olivier in the film), who infamously crucified the defeated rebels, by the thousand, all along the Appian Way? Or was it Pompey the Great, who hurried back from his campaigns in Spain, and tried to rob Crassus of the credit by wiping out a stray group of runaways and claiming the victory for himself"?[5]

In The Spartacus War, Barry Strauss makes the point that it is neither Crassus who led the victorious war against Spartacus or Pompey who came in later came out with any credit or prestige with history both have been largely forgotten yet it is the loser Spartacus who is arguably the more famous and certainly looked up to.

As one reviewer put it "Both Crassus and Pompey, were as doomed as Spartacus: Crassus was soon to be massacred in a battle against the eastern Parthians (a much more formidable enemy than Spartacus), while Pompey was brutally decapitated in his civil war against Julius Caesar. The political future lay elsewhere, with the one-man rule of the first emperor Augustus. Ironically, it was Augustus's undistinguished father, Octavius, who, ten years after Spartacus's death in 71BC, finally crushed the last remnants of his supporters, still living rough (and annoying the local population) in southern Italy".

To conclude, the book is not without its weaknesses. Not even a good military historian as Strauss undoubtedly can paper over large gaps that appear in the Spartacus evidence. Reading Strauss, you almost get to feel his frustration as well as your own in attempting to understand Spartacus's motives.
Reviewer Tony Williams also makes this point "why they revolted in the first place. Strauss is simply not clear. Spartacus was "a man of destiny," the author tells us. He was a "man of passion, thirsting for freedom." But the revolt was neither to free slaves generally nor to escape into freedom far from the clutches of the Roman Republic. If we learn little of the why Strauss does not fall short on the how of the Spartacus revolt".

This frustration was shared by many who reviewed the book in the mainstream press one writer asked "What, for example, were Spartacus's strategic plans? Once he had broken out of the gladiatorial barracks at Capua and gathered together a sizeable force of other runaways, why did he march all the way north to the Alps, then back down south again? Was this, as I half-suspect, aimless wandering with no game plan at all? Strauss is more generous, and guesses that Spartacus was let down by his followers: they took one look at the mountains they would have to cross if they were to make their way to freedom in the north, as Spartacus planned, and beat a hasty retreat".

It was just that objectively Spartacus could not take the revolution further than he did. While you get to learn little of Strauss's political leanings he has made some wayward comparisons between the rebellions which he describes as probably the most successful insurgencies in world history. He has also made parallels between the slave revolts American' War on Terror'.

"It's the story of an insurgency like ours in Iraq and Afghanistan," Strauss says. "The great power can't fight him, because it's bogged down in another war. The war is a test of the great power's moral fibre. And a charismatic leader inspires men to fight using liberation theology like jihad. The similarities leap off the page."

While comparisons with the United States imperialism and the Roman Empire are fraught with danger, I would draw the line to say there is any comparison between Spartacus and a bunch of clerical fascists like the Taliban.

Posted by A Trumpet of Sedition at 10:36