The Good Old Cause – Communist Intellectuals and the English Radical Tradition-By David Morgan-Issue Number 45 in the Occasional Publications series of the SHS- Cost: £4.00 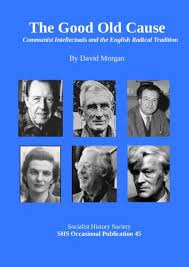 All these titles are referencing the phrase whose origins stem from the sentiment espoused by veterans of Cromwell's New Model Army and other supporters of the English Republic like John Milton. The Good Old Cause was the name given, retrospectively, by the soldiers of the New Model Army, to the complex cause that motivated their fight on behalf of the Parliament of England.

For such a little book, Morgan manages to cram an awful lot of work into it. Morgan examines the work of a group of very important Communist Party historians and some others who were outside the formal group. Like many of their generation, these intellectuals were drawn to left-wing politics in the early part of the twentieth century.

The historians and significant intellectuals that occupied the British Communist Party Historians Group (CPHG) in the 1940 and 1950s played an important and dare I say leading role in the study of British and World history throughout the 20th century. It is significant that in London's National Portrait Gallery there used to hang a painting which has been described as "of seven people arranged on either side of a low table in a book-lined study". They were historians, members of the editorial board of the journal Past & Present, which arose from the British Communist Party's Historians' Group".

Eric Hobsbawm, Edward and Dorothy Thompson, Christopher Hill, Victor Kiernan, George Rude, Raphael Samuel and Rodney Hilton to name a few were all moulded by the early strategic experiences of the 20th century, the depression of the 1930s, the Second World War and of course the Russian revolution. "For some, the group was, if not exactly a way of life, then at least a small cause, as well as a minor way of structuring leisure. For most it was also friendship,"  said Eric Hobsbawm.

As Morgan correctly points out, there were of course not just "Communist intellectuals", in the CP writing about history, a significant number of workers were drawn into their circle.

The historian who perhaps was most open to the idea of using poetry, literature etc. to understand the past was Christopher Hill. Certainly in later life Hill made use of varied literary forms of poetry, fiction, plays, sermons, diaries, and letters. Also in later life Hill started to use the genre of "history from below" adopted by the Communist Party. While this type of historical study does retain some uses, I am inclined to agree with Ann Talbot's evaluation of this type of historical enquiry when she wrote: "the Communist Party sponsored a form of "People's History", which is typified by A.L. Morton's People's History of England in which the class character of earlier rebels, revolutionaries and popular leaders was obscured by regarding them all as representatives of a national revolutionary tradition. This historical approach reflected the nationalism of the bureaucracy, their hostility to internationalism and their attempts to form an unprincipled alliance with the supposedly democratic capitalists against the fascist Axis countries. People's history was an attempt to give some historical foundation to the policies of Popular Front—the subordination of the working class to supposedly progressive sections of the bourgeoisie and the limiting of political action to the defence of bourgeois democracy—which provided a democratic facade to the systematic murder of thousands of genuine revolutionaries, including Trotsky. It was the approach that Christopher Hill was trained in, along with E.P. Thompson, Rodney Hilton and Eric Hobsbawm, who were part of the Marxist Historians Group and came under the influence of Maurice Dobb and Dona Torr.[1]

There is a positive side to this type of history that introduces to the wider working class figures from history that they would under normal circumstances not get to meet. The Communist Party Historians Group (CPHG) wrote about figures such as Milton, Bunyan, Defoe, William Blake, Shelley and William Morris. A modern working class will not be able to make a revolution without a study of these figures and others. It must also learn about previous struggles such as the Peasants' Revolt, groups such as the Levellers and Diggers of the English revolution. It must have an intimate knowledge of its revolutionary figures such as the Digger Gerrard Winstanley and the Leveller pamphleteers.

Morgan also mentions "popular dreams and myths of a Utopian past" which are also important in helping the working class to understand that it is a revolutionary class.

Hill's work is important in that it sought under tremendous difficulties to answer important questions such as why were the radicals such as the Levellers etc. were defeated. Hill was one of the few historians who understood the difficulty these revolutionaries faced when mounting a revolution as Hill says "I think it is right to say that the revolution was not planned. One of the things that should be made more of is that no one in England in the 1640s knew they were taking part in a revolution. American and French revolutionaries could look back to England, the Russian revolutionaries had an ideology of revolution based on English and French experience, but no one in England could draw on such experiences. The very word revolution emerges in its modern sense in the 1640s. So that the English revolutionaries are fumbling all the time, they have not got a Rousseau or a Marx to guide them. The examples of the Netherlands and the French Huguenots were discussed in the 17th century as religious or nationalist revolts. The only text they could look to was the bible, but of course, the bible says such different things that you can get any theory out of it so that it proved unsatisfactory. One of my arguments in my new book is that it was the experience of its uselessness as an agreed guide to action in the 1640s and 1650s that led to its dethroning from its position of absolute authority. That was a major problem for the English revolutionaries; they had no theory to start from.[2]

My difference with Morgan is that while a study of these figures is important, that does not mean that there is an unbroken thread of radical struggle that workers can tap into. The working class must take a critical approach to all historical phenomena. This radicalism does not replace the need for a conscious revolutionary party along the lines of the Bolsheviks to take power.

One question Morgan does not ask is how to characterise these historians.  Ann Talbot asks of Hill but could be said of other CP historians "What any serious reader interested in history or politics wants to know is when we read Hill's books are we reading the work of an apologist for the Stalinist bureaucracy or of someone who was genuinely struggling to make a Marxist analysis of an aspect of English history? It has to be said that this is a complex question".

Despite many caveats, this is an important little book, and it is hoped many workers interested in the past put it into their library.

Posted by A Trumpet of Sedition at 06:11